California is showing improvement in its fight against the coronavirus pandemic, Gov. Gavin Newsom said Wednesday, citing a significantly lower number of confirmed new cases as the state begins to clear backlogged cases from a data failure.

The Democratic governor said he also was also encouraged by a downward trend in the state’s hospitalization rates which he said are down 21%, and ICU admissions, down 15 % over the last 14 days. The number of newly confirmed cases Wednesday, 5,433, was “another indication that we’re turning the corner on this pandemic,” he said.

The latest figures represent a significant drop from the record 12,807 new cases reported statewide during the spike in infections last month.

More than 10,600 people statewide have died, including 180 reported Wednesday, with the great majority in Los Angeles County.

This chart shows the cumulative number of cases per state by number of days since the 50th case.

Dr. Roger Lewis, director of the Los Angeles County Department of Health Services, said there’s been “a clear decline” in hospitalizations, meaning the rates of transmission began to slow two to three weeks ago. Daily said cases are back to where they were in May.

“The consistent downtrend in new cases requiring hospitalization and the slight decrease in transmission rate is good news,” he said. “This is what progress looks like when we work together.”

State officials are still working to process the nearly 300,000 coronavirus test results lost because of a data error. The state relies on timely statistics to determine whether schools and businesses can reopen. Newsom said it will take a few more days before officials can assess the overall infection rate.

The number of infections is thought to be higher because many people have not been tested, and studies suggest people can be infected with the virus without feeling sick. For most people, the coronavirus causes mild or moderate symptoms, such as fever and cough that clear up in two to three weeks. For some — especially older adults and people with existing health problems — it can cause more severe illness, including pneumonia, and death.

While the virus’ spread appeared to be slowing, the economic effects are still raging. The state has processed more than 9.7 million claims for unemployment insurance since the pandemic began.

The state halted eviction and foreclosure proceedings in April because of the pandemic. But the Judicial Council of California will vote Thursday to resume those proceedings starting Sept. 1. Newsom said Wednesday the move gives lawmakers a chance to pass a law that would continue eviction protections into 2021. 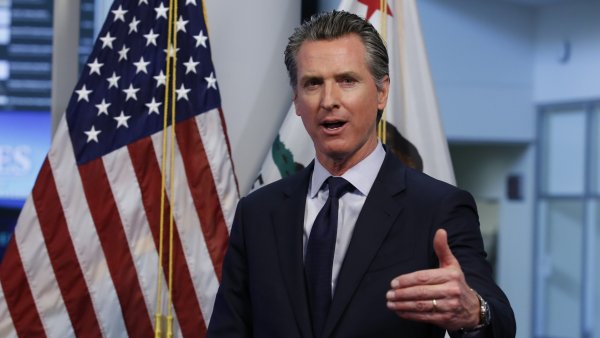 Newsom said he is working with Democratic lawmakers and “we have a pathway we believe to put something in place that would work very nicely.”

Meanwhile, a prison employee has died and nearly 100 inmates at Folsom State Prison have tested positive for the coronavirus in the latest outbreak to hit California’s corrections system, the Department of Corrections and Rehabilitation reported.

The newspaper obtained a memo by a California Prison Industry Authority official that said an employee who worked at the prison died from potential complications related to COVID-19. A spokeswoman for the authority did not return telephone and email message seeking comment on the report.

The corrections department said it has sent a medical team to respond to the outbreak at the prison north of Sacramento. Since mid-July, it has set up tents to quarantine patients and a facility to screen potentially infected people.

Nearly 2,500 inmates are at the Folsom prison.

The worst outbreak so far has been at San Quentin State Prison, where 25 people died and more than 2,200 inmates contracted the coronavirus. Over the weekend, corrections officials confirmed San Quentin’s first prison guard death from coronavirus.