The designer of the troubled fix of the Millennium Tower announced a new plan Tuesday that would dramatically reduce the originally proposed 52-pile foundation retrofit plan to just 18 foundation piles.

Ron Hamburger’s new plan comes as the building is now tilting 26 inches at the corner of Mission and Fremont streets, much of the leaning brought on during installation phase of the fix, which started in May and involves digging around the building on two sides to shore it up.

Currently, crews have installed nine support piles to anchor the structure down to bedrock, mostly along Fremont, where the building is sinking and leaning the most.

In a letter outlining the newly scaled-down plan, Hamburger acknowledged the building will tilt and sink “a little more,” before the work is done late next year, but stressed that the “18-pile solution offers an optimal solution between additional settlement and benefit gained.” 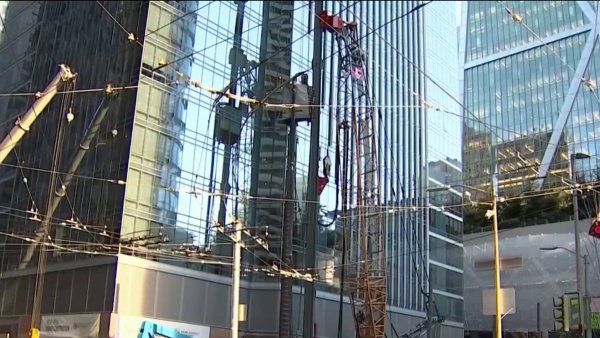 Hamburger acknowledges in a letter to a top city building official that the building could tilt another 3 inches before the work is done in September of next year, but experts are skeptical of even that prediction given the fix project’s troubled track record.

Hamburger separately told homeowners to expect less tilt recovery to the north along Mission Street under his revised plan.

“With the reduced number of piles we expect somewhat more recovery of tilt to the west than originally planned, however, there will be less tilt recovery to the north,” according to the letter sent to homeowners.

Some experts worry about another downside to the new plan.

“There's a lot of concern about it,” said foundation expert David Williams, who predicts that fewer piles will create more stress on the 10-foot foundation mat when the load of the building is shifted onto them. The risk, he says, is the new stress would cause the foundation to crack.

“Any cracks will just open up and they become paths for corrosion,” Williams said. That’s because, he says, the water in the ground will infiltrate the concrete and the ensuing rust would lead the steel enforcement bars to expand. The process of rust “jacking,” Williams said, will lead to further cracking of the concrete mat.

The city-appointed engineering design review panel has yet to sign off on the revised fix plan. But Hamburger has told residents that fix work will go forward under the existing city permit.