As countries scramble to bolster testing for the coronavirus, the pandemic continues to disrupt global supply chains and threaten access to the very chemicals needed to process the tests.

“We've never had to have this level of demand so quickly,” said George Serafin, biomedical engineer and senior managing director at FTI consulting, headquartered in D.C.

For thirty years, Serafin has helped medical companies manage their medical supply chains, but the pandemic has changed the game. 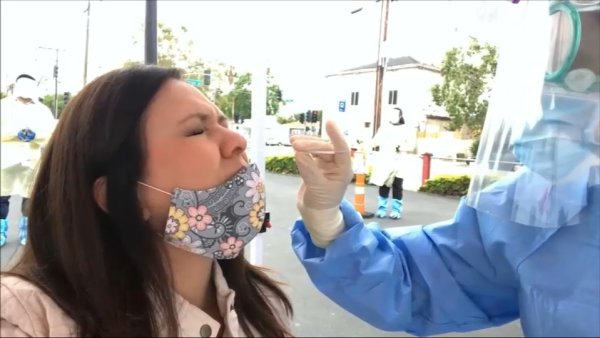 From a small office in Hayward, Dr. Bassam El-Fahmawi and his team at Mawi DNA technologies are taking on the global challenge. Dr. El-Fahmawi hopes his patented test tube design, lined with small “teeth” and filled with a special buffer solution - will make coronavirus testing faster, more accurate, and more widely available.

In a typical COVID-19 test, swabs are taken from the nose and mouth, placed in separate vials, and then kept on ice until they can be processed, which must take place within 72 hours. At the lab, technicians separate the liquid from the swab and use chemical reagents to extract the viral RNA for testing.

Dr. El-Fahmawi’s new type of test tube is designed to streamlines the process. The vial, known as the iSwab-Microbiome, has tiny teeth that squeeze the sample off the swab, so there’s no need to keep the swab inside the tube. A second sample can also be added to the same vial, which can create a more concentrated sample to improve overall reliability of the test.

“Two is always better than one,” said Dr. El-Fahmawi.  “It makes it more accurate because you can detect more of the virus,” he said.

The new test tube also contains a special buffer solution, a trade secret, which is designed to keep the virus exactly as it was at the time of sampling. As Dr. El-Fahmawi explains it, the new method is like taking a snapshot of a flower – it doesn’t change. However, older methods, he argues, are more akin to a time-lapse video that allows the flower to wilt over time.

The buffer solution stops the sample from changing or degrading, so that the viral specimen remains intact and can be kept unrefrigerated for up to 21 days.  Once it reaches the lab, the sample can be processed without using chemical reagents.

“Because testing is so widespread, there's a greater chance of those chemicals being in short supply. But since we leapfrog that step, we avoid that potential shortfall,” said Jerome David, vice president of sales and marketing for Mawi DNA.

So far, 1.5 million coronavirus tests have been done in California, and more than 13 million across the nation. As the country re-opens, however, millions more tests may be needed, especially if businesses, schools, and daycare centers require testing.

“Just doing temperature screening certainly isn’t going to be sufficient,” said George Serafin. “The ability to do a test ... is going to be important.”

New Test Tubes Currently in Use in at Least Nine States, Five Other Countries

The test tubes are also being used in five other countries: Italy, Mexico, Spain, Iceland, and Sweden.

“We've had to expand our facility and we've had to bring in additional capacity in order to meet the crushing demand that we've experienced from the coronavirus epidemic,” said Jerome David.

If the supply chain runs short of the essential testing chemicals, Dr. El-Fahmawi and his team intend to be ready with their new type of test tube that no longer relies on those materials. “You have to innovate,” he said. "There is so much stress on the supply chain … it's not just coming from here, it’s coming from everywhere at the same time.”