Attorneys for former President Donald Trump asked a federal judge Wednesday to block a Justice Department order that the IRS turn over years of his income tax returns to Congress.

Trump's lawyers argued that the House Ways and Means Committee is seeking the returns merely to look for embarrassing information.

The attorneys asked for a permanent injunction barring the IRS from complying with the committee's request for Trump's tax returns. 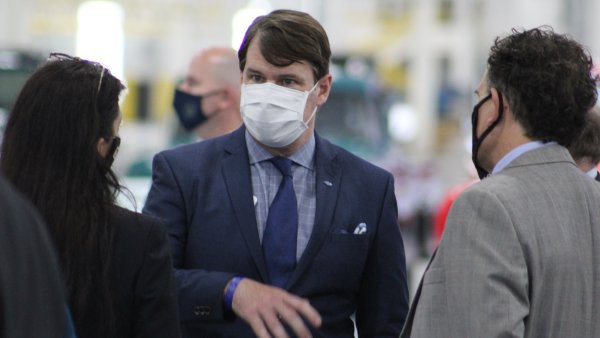 The expected move came nearly a week after the DOJ's Office of Legal Counsel reversed its 2019 opinion, saying the returns must be disclosed to the Democratic-led committee, which had sought the documents for several years.

The OLC said that Ways and Means, like other tax committees of Congress, has a "broad right" to obtain taxpayer information from the Treasury Department, the IRS parent.

The OLC also said there was a legitimate legislative purpose in this particular case: to assess how the IRS audits presidential tax returns.

Trump's lawyers, in their new filing in U.S. District Court in Washington, D.C., argued that the rationale is a pretext.

"While House Democrats had offered countless justifications for obtaining the President's tax returns, no one at the time had ever mentioned a desire to find out how the IRS audits Presidents," the filing said.

"The [committee] Chairman's request bore little resemblance to an effort to investigate how the IRS audits Presidents," the filing said.

"It asked for the information of only one President, asked for open files for which audits have not been completed, and never asked the IRS for the most relevant information—namely, how it audits Presidents."

The filing said the judge should rule that the requests for the returns, which were made separately in 2019 and 2021, are "unlawful and unenforceable because they lack a legitimate legislative purpose, exceed statutory authority, violate the First Amendment, violate due process, and/or violate the separation of powers."

Trump broke decades of precedent as a candidate and president in refusing to disclose his income tax returns.

Trump was president when the DOJ first opposed the release of his tax returns to the Ways and Means Committee.

The Supreme Court last year rejected a last-ditch effort by Trump to block the release by his accountants of his tax returns and other financial records to the Manhattan District Attorney's Office, which is conducting a criminal investigation of his company.