A major winter storm hitting Northern California with rain and snow was expected to intensify Monday and bring travel headaches and the threat of localized flooding after an especially warm and dry fall in the U.S. West.

Light rain and snow that began falling on Sunday got heavier overnight. The multiday storm could dump more than 8 feet (2.4 meters) of snow on the highest peaks in California and Nevada and drench other parts of the states as it pushes south and east before moving out midweek.

Meteorologist Kari Hall has an update on the atmospheric river flowing through the region and its impacts in the Microclimate Forecast.

"This is a pretty widespread event," said National Weather Service meteorologist Anna Wanless in Sacramento. "Most of California, if not all, will see some sort of rain and snow."

The storm will bring much needed moisture to the broader region that's been gripped by drought caused by climate change. The latest U.S. drought monitor shows parts of Montana, Oregon, California, Nevada and Utah are classified as being in exceptional drought, which is the worst category.

Most western U.S. reservoirs that deliver water to states, cities, tribes, farmers and utilities rely on melted snow in the springtime.

The storm this week is typical for this time of the year but notable because it's the first big snow that is expected to significantly affect travel with ice and snow on the roads, strong wind and limited visibility, Wanless said.

Drivers on some mountainous passes on Sunday had to put chains on their tires and were warned of possible road closures in coming days.

Officials urged people to delay travel and stay indoors. The rain could cause minor flooding and rockslides, especially in areas that have been scarred by wildfires, forecasters said.

The storm downed power lines near an In N Out restaurant in Mill Valley, causing a power outage, and flooded Highway 101 near Lucky Drive. Cierra Johnson reports.

South of the San Francisco Bay Area, a 40-mile (64-kilometer) stretch of Highway 1 in California's Big Sur area was closed as a precaution until Tuesday. The scenic coastal route frequently experiences damage during wet weather.

Nearby Monterey County residents who live close to burn scars from last year's Dolan Fire were warned to be prepared to evacuate if rains loosen hillsides and cause debris flows.

Forecasters said strong winds accompanying the storm could lead to power outages. Karly Hernandez, a spokesperson for Pacific Gas & Electric, said crews and equipment are staged across the state to respond quickly if the power goes out. 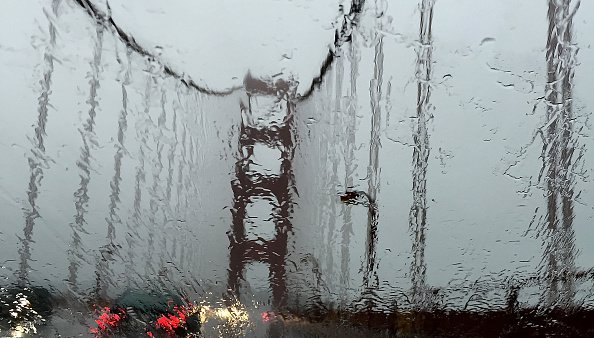 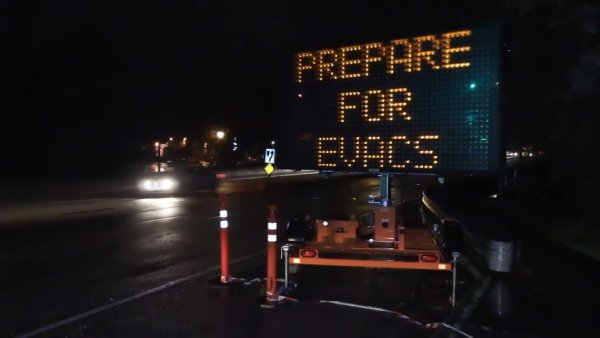 Evacuation Warning Issued for Areas Around Dolan Burn and Salinas

Rain fell intermittently across California on Sunday. Andy Naja-Riese, chief executive of the Agricultural Institute of Marin, said farmers markets carried on as usual in San Rafael and San Francisco amid light wind.

The markets are especially busy this time of year with farmers making jellies, jams and sauces for the holidays, he said. And, he said, rain always is needed in a parched state.

"In many ways, it really is a blessing," Naja-Riese said.

A second storm predicted to hit California midweek could deliver almost continuous snow, said Edan Weishahn of the weather service in Reno, which monitors an area straddling the Nevada state line. Donner Summit, one of the highest points on Interstate 80 and a major commerce commuter route, could have major travel disruptions or road closures, Weishahn said.

The weather follows a November that was unseasonably warm for California.

While travel may not be advised at the moment, ski resorts are ready to reopen as soon as this latest storm blows through.

The Sierra Avalanche Center warned heavy snow and strong winds on top of a weak snowpack could cause large and destructive avalanches.