Don't worry. This bear on the side of the road is friendly.

Say hello to Bearsun, a human-size teddy bear character that's making a roughly 400-mile journey from Los Angeles to San Francisco on foot. Jesse Larios, the 33-year-old man inside the Bearsun costume, has been on the road for less than a week, but he's already captivated and inspired a growing mass of followers, both online and in person.

"I just got a bag of Doritos," Larios said with a chuckle Thursday evening after he got the snack from a random person he met on the road while making his way through the southern section of the Central Valley. "They've been bringing me everything: oranges, someone brought me a Happy Meal."

Larios created Bearsun, an animated-looking bear with an oversized, bean-shaped head, about five years ago. Since then, Bearsun has gained a following on social media and even run in the Los Angeles Marathon.

"I just put the suit on and people use their imagination after that," Larios said.

For the happy-go-lucky Larios, the current adventure just kind of came together on a whim.

"Just to be real…a very impulsive decision," he explained.

He threw on the Bearsun costume, laced up his sneakers and hit the open road, hoping to raise some money for a nonprofit and bring some more recognition to his character.

He's done that and then some. Bearsun's Instagram Live videos and photo posts documenting the journey have been overflowing with words of praise and encouragement. Out on the road, complete strangers have stopped what they're doing to strike up conversations with Larios, snap some photos and even offer him whatever they can to help him along his odyssey.

"It's been like this the whole day," Larios said, talking about the countless times he's been stopped by strangers fascinated by the sight of a life-size teddy bear walking down the road. "I like hearing them cause they're stoked. This is why I'm out here. I didn't anticipate for that to happen."

At the beginning of his trek, which began April 12 in downtown Los Angeles, Larios said he was pumping out anywhere from 35 to 40 miles per day, hoping to finish the expedition in under a week. The frequent pauses and some unforeseen detours caused by private roads have slowed him down, but he doesn't seem to mind.

"It's just a bunch of positivity going on," he said.

Larios is mostly alone, except for the occasional supply drop from one of his friends, who's helping to chronicle the excursion. He stocks up on food at grocery stores he passes or welcomes treats from people he meets along the way.

He's made a pitstop at West Coast favorite In-N-Out Burger and even run into at least one sheriff's deputy who wished him well.

When it's time to get some rest, Larios sleeps as is, crashing under the stars inside his costume.

The finish line is the Golden Gate Bridge. When he'll arrive is up in the air. Right now, he's just happy to bring some joy to as many people as possible.

"It's good to see people, first of all," he said. "Second of all, it's good to see them smiling, especially after last year, all these unfortunate events that we had to go through." 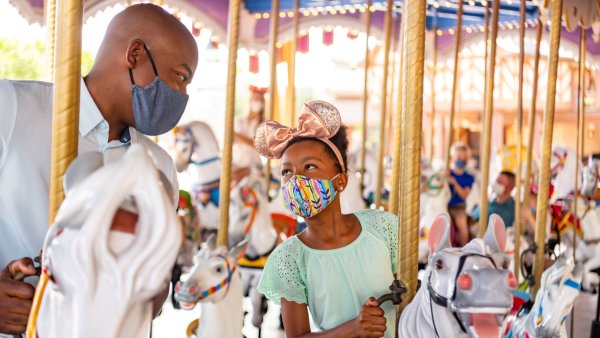 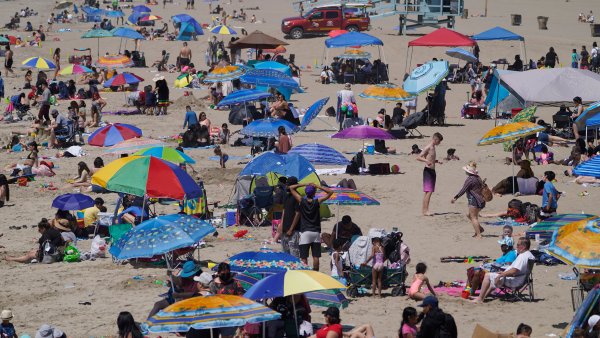 Sun's Out, Surf's Up and California's Reopening More Widely