California Sees Bright Spot in ‘Most Intense Surge' of Virus

“There is a light at the end of this tunnel," Gov. Gavin Newsom said.

California has lifted a stay-at-home order for 13 northern counties with improving hospital conditions, but most of the state’s population remains under tight restrictions in the deadly coronavirus pandemic.

The state on Tuesday lifted the order in the Sacramento region — a rare turn of good news as the state pushes through what Gov. Gavin Newsom called its “most intense surge” of the coronavirus.

The order imposed Dec. 10 banned gatherings outside a household and restricted many businesses. With virus cases and hospitalizations more stable, the region can resume outdoor dining and worship services, reopen hair and nail salons and other businesses, and increase capacity at retailers. Gatherings up to three households are allowed.

Newsom, a Democrat, made the announcement on social media — reminding people to wear masks and stay home as much as possible. He offered a hopeful promise: “There is a light at the end of this tunnel.”

California has seen an enormous surge of cases, hospitalizations and deaths since Thanksgiving.

Newly reported cases over the last seven days in the nation’s most populous state have far outpaced others, such as Texas and Florida — the second- and third-most populated U.S. states. However, for the past seven days, California’s average daily rate of new cases per 100,000 people lags behind Arizona and Rhode Island and ties with Oklahoma.

The state is averaging 42,000 newly reported virus cases a day and recorded 3,500 virus deaths in the last week. On Monday, the pandemic death toll topped 30,000.

Health officials have warned that hospitalization and death increases are likely to continue as people who contracted the virus during the holidays get sicker. 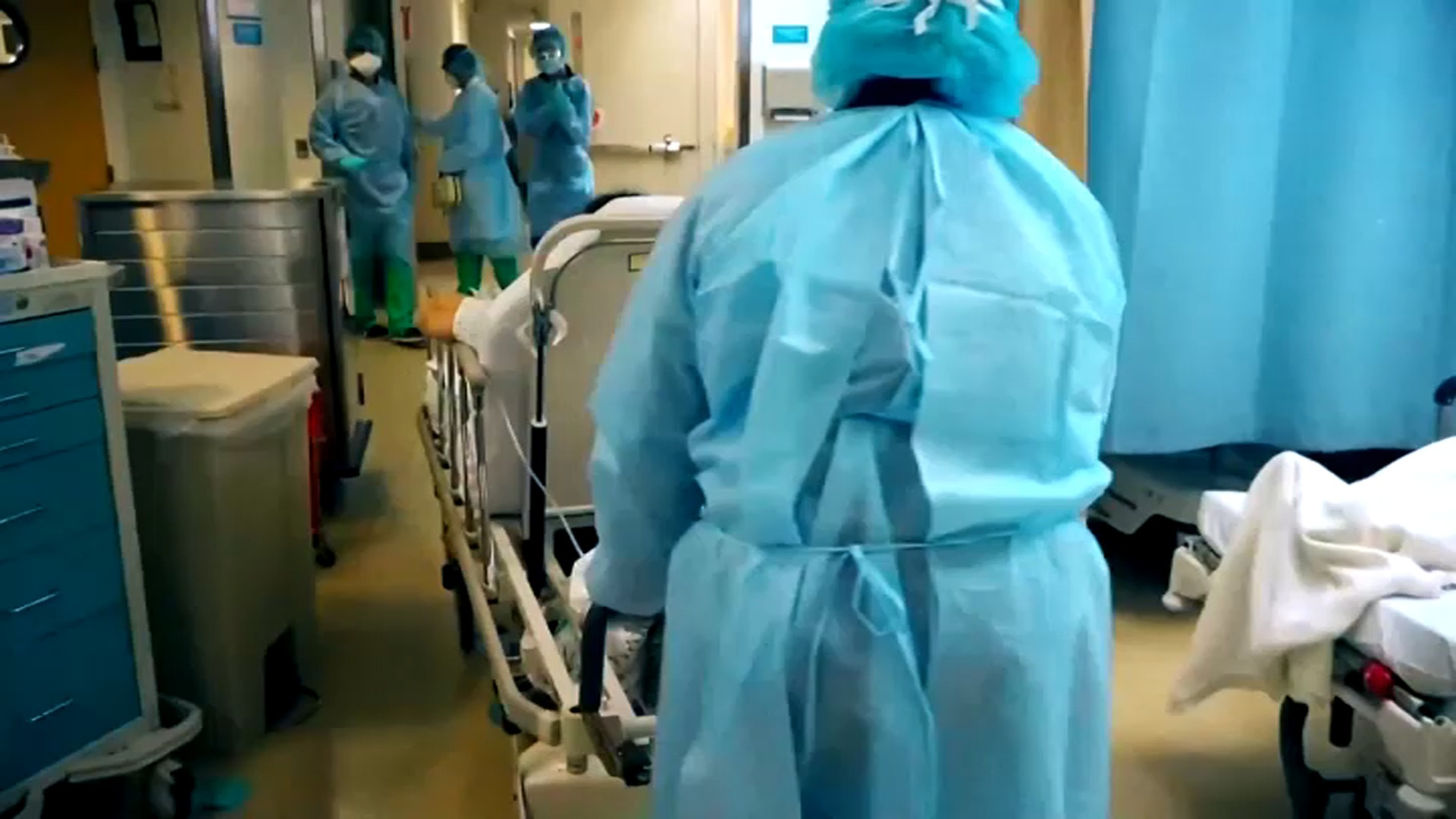 Morgues at 3 South Bay Hospitals at Capacity, Others Getting Close 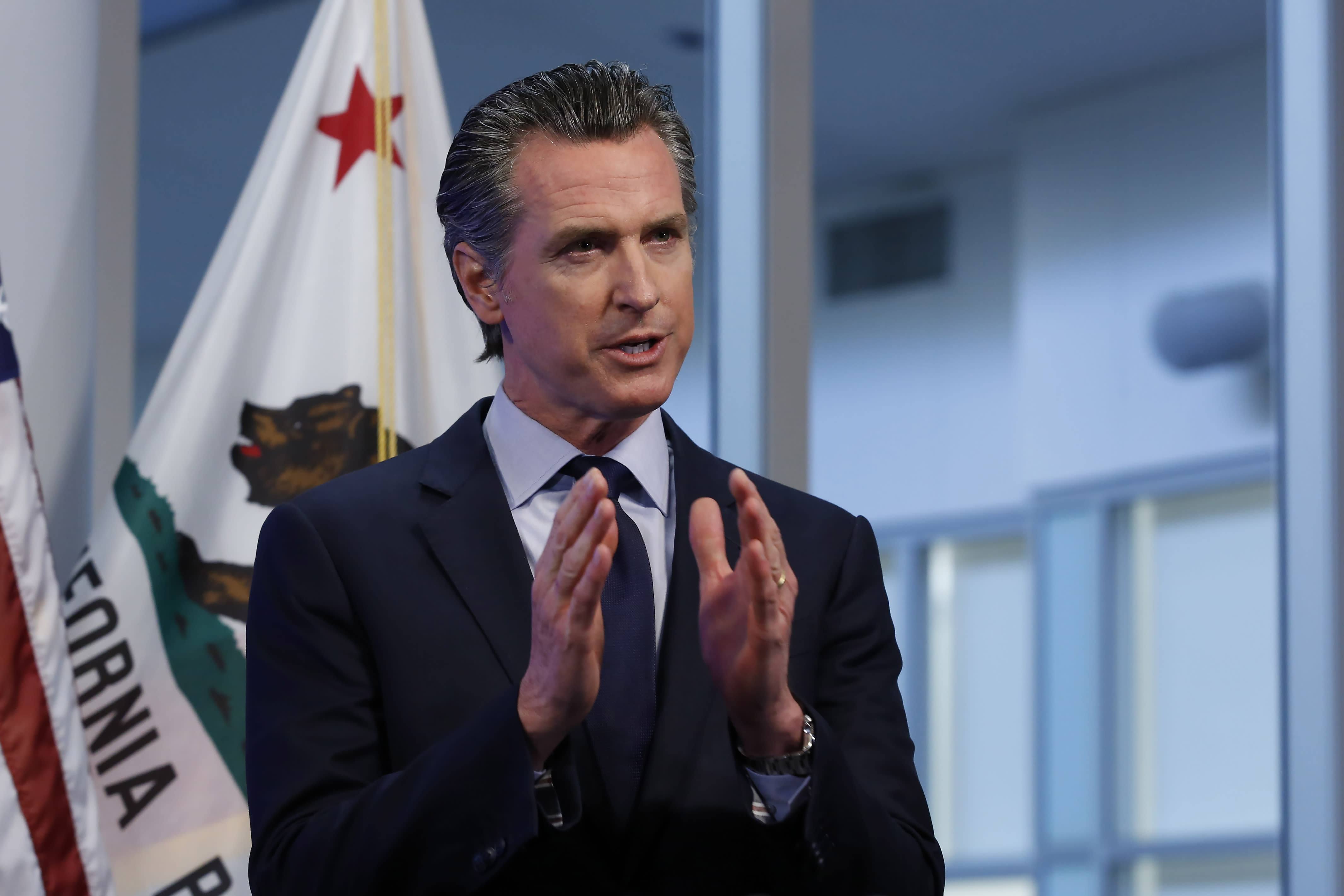 Newsom imposed the nation’s first statewide stay-at-home order in March. It was lifted in the spring when cases fell but a summertime spike spurred more restrictions.

A huge, late fall surge prompted the Newsom administration to divide the state into five regions in December and impose a stay-at-home order in four when their ICU capacity dropped below 15%. Only rural Northern California remained outside the order.

The Sacramento region’s ICU capacity sits at 9.4% but it is projected to rise above 15% over the next four weeks, prompting the state to lift the order. The region includes El Dorado County, home to Lake Tahoe, a tourism hot spot that drew large holiday crowds despite restrictions.

Newsom and Dr. Mark Ghaly, California’s secretary of health and human services, have credited the state-at-home order with limiting the outbreak’s severity but some experts question how much benefit was derived.

“What the stay-at-home orders were meant to do is keep families that don’t live together separated. Instead, over the last few months, you’ve had people getting together. You’ve had small social gatherings indoors,” said Dr. Brad Pollock, UC Davis School of Medicine associate dean for public health sciences. “I wouldn’t say the stay-at-home orders have been futile, but they probably haven’t had a huge impact on what’s actually happened with the transmission patterns.”

Supervisor Mike Ziegenmeyer of the Sacramento region’s Sutter County acknowledged as much when reacting to lifting the order.

“It’s exciting, but at the same time, who adheres to it?” he said.

Shon Harris, a city councilman in Yuba City, said he was surprised Newsom lifted the order, calling it “baby steps back to the old normal.” But he encouraged people to “take COVID seriously, take the precautions seriously (and) abide by them.”

“They’ve given us an inch. We don’t want to take a mile and get greedy,” he said.

Meanwhile, the state continued its drive to administer nearly 1.5 million vaccine doses by Friday, still a small portion of what’s needed for herd immunity in the state of nearly 40 million people. Several counties announced they would open mass vaccination sites, including at Dodger Stadium, Disneyland and Cal Expo, an outdoor venue in Sacramento.

But quickly ramping up vaccinations, including through new rules by the federal government, further led to confusion and varying county approaches.

California has been focused on vaccinating health care workers and nursing home residents first, with people over 75 and those at risk of getting the virus at work, like teachers or agriculture workers, in the next tier.

But the federal government said vaccinations should be available to anyone older than 65 and younger people with certain health conditions. Orange County said it would swiftly move to vaccinate people 65 and up.

“Moving millions of people farther ahead in line by definition means millions of others are farther back in line,” said Mitch Steiger, California Labor Federation legislative advocate.

Dr. Michael Wasserman, California Association for Long Term Care Medicine president, worried that the state may be moving on without making sure workers and residents of nursing homes, assisted living and group homes are protected first, while others expressed similar fears that the rush to vaccinate the aging could leave behind workers who had been next or those in disadvantaged communities who are harder to reach.

“Sure you’re hitting the gas pedal, but don’t leave us behind,” summarized Charles Bacchi with the California Association of Health Plans, even as he supported concentrating on the older population. “We just can’t lose sight of that.”

This story has been corrected to show that the San Joaquin Valley region, not the entire Central Valley, remains under a stay-at-home order.