In California, Inconsistent School COVID Rules Are the Norm

There is little similarity in how California schools are applying COVID-19 rules, leading to a dizzying patchwork of approaches that parents and teachers say can be confusing and frustrating

Now that schools are back in session, parents are mastering this year’s new school vocabulary: Modified quarantine, antigen vs. PCR testing and the so-called Swiss cheese model for keeping classrooms safe, which has become the butt of a few jokes.

But aside from a common pandemic lingo there is little similarity in how California schools are applying COVID-19 rules, leading to a dizzying patchwork of approaches that parents and teachers say can be confusing and frustrating.

While California has a few statewide requirements for all schools, such as requiring all public and private school teachers and students to wear face masks indoors, and a vaccinate-or-test rule for teachers starting in mid-October, many other details are left to local school officials. That includes the who, when, where and how to test for COVID-19, and ever-shifting quarantine rules.

Some large urban districts like Los Angeles, San Francisco and Oakland tell students to mask up for outdoor recess, while many others do not.

Some schools have rigorous on-site mandatory COVID-19 testing programs, but many don’t.

Across the state, parents who want to see more testing are looking to the Los Angeles Unified School District — the nation's second-largest — as a model. The state’s largest school district has an ambitious program that mandates weekly on-site testing for all 600,000 students and 75,000 employees.

“It’s crazy that a school district as huge as Los Angeles can pull it off, and we’re just twiddling our thumbs over here,” said Samantha Benton, a mother of two in Sacramento, where only voluntary testing is offered. 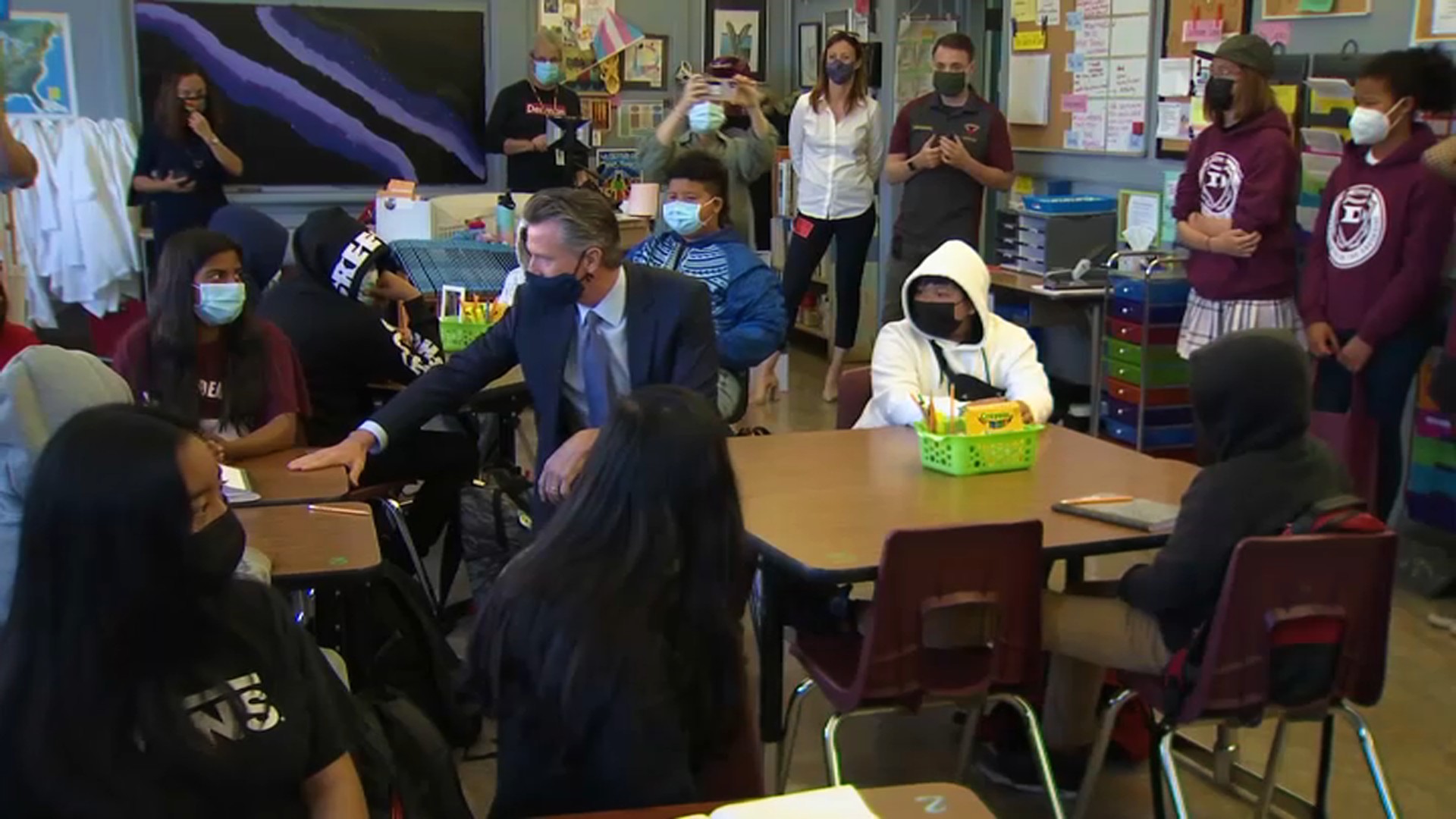 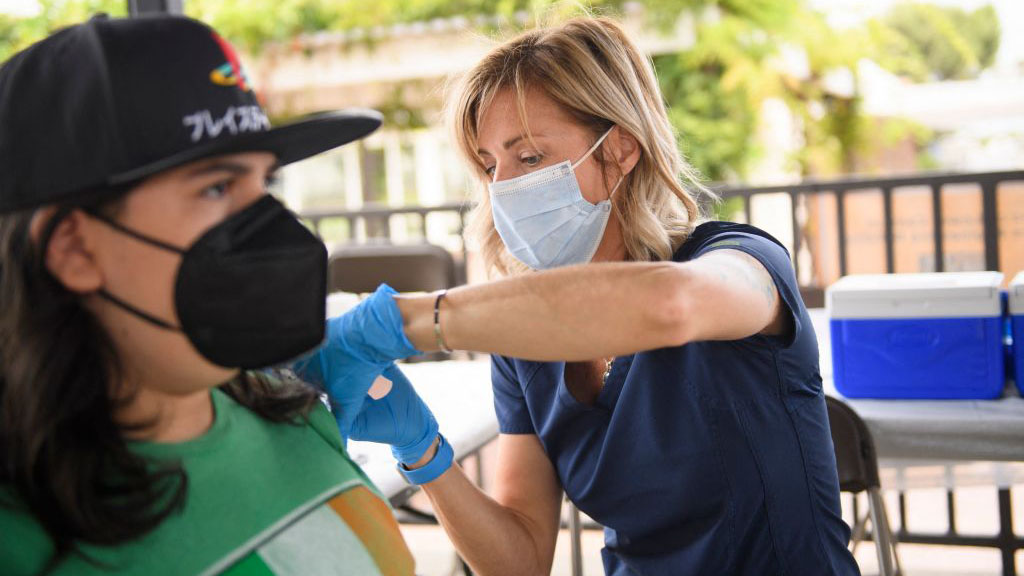 Last week, California became the first in the nation to say it will require the coronavirus vaccine for all public and private schools once the shot receives full regulatory approval, which may not kick in until the next academic year. Until then, the decision is up to local districts.

A few of California’s biggest school districts, including Los Angeles and Oakland, have mandated vaccinations for students 12 and over. San Diego Unified will require vaccines for staff and students 16 and up.

The California School Boards Association calls it “a patchwork of different methods” that is not the most effective approach and is troublesome because it asks school officials to act as medical experts.

Pandemic-era conflicts between school districts and teachers have entered a new phase. The Oakland teachers union said its district guidelines are “contradictory or confusing" and not enforced. The union is seeking mandatory weekly testing and monitors to enforce mask wearing.

Teachers “are tired of waiting for a major outbreak ... to uphold commonsense safety measures," the union said in a statement this week.

Nationwide, as in California, the rules depend on where you live, and often on politics. Republican governors in Arizona, Iowa and Florida have banned school mask mandates, but many parents, local leaders and courts are pushing back. Some states have standard policies for all districts, while others allow schools to set their own rules. At least nine states have explicitly said schools cannot require vaccinations, including Alabama, Arizona, Arkansas, Indiana, Iowa, Montana, Oklahoma, Tennessee and Texas.

Vaccinations are one element of the “Swiss cheese model” of pandemic defense, a metaphor for multiple layers of protection to block the spread of germs. A cartoon-like drawing of the model, with 10 slices of cheese, has become a regular part of school safety presentations.

“They show this at like every board meeting and every school Zoom,” said Sacramento mother of two Kristin Goree. “In group chats it’s like, ‘No! Not that again!’"

Goree agrees with the concept of combining layers of protection, like social distancing, masks, hand-washing, testing and ventilation. “But our school is not implementing every layer of cheese — like mandatory testing,” said Goree, whose children are signed up for optional weekly testing while most of their classmates are not.

Quarantines get meted out differently, too. Sometimes an entire classroom is ordered to quarantine, sometimes no one is.

Laura Hawkins’ healthy 6-year-old daughter missed a week of kindergarten at her San Francisco school after a classmate got COVID-19.

“On day three of school, we got a text message and a robocall saying your child is a close contact to someone who tested positive,” said Hawkins. They had two options: stay home for a 10-day quarantine or stay home five days, followed by a negative COVID-19 test. They choose the latter, but soon after returning to school her daughter woke up with a stuffy nose. Hawkins diligently reported it to the school, which required proof of another negative PCR test before allowing her back.

The laboratory PCR tests often take 24 hours or more to return results, but are more accurate and reliable than the rapid antigen tests that can be done at home.

“She missed a total of six days of school, having no more than a stuffy nose,” said Hawkins.

In Sacramento, when officials announced an outbreak of two dozen cases Sept. 2 at a K-6 charter school, they kept the school open. Some parents were later outraged to learn that health officials had initially recommended shutting the school for two weeks.

The teachers union filed a formal workplace safety complaint accusing the district of mishandling the outbreak and ignoring pandemic protocols by allegedly encouraging staff with cold symptoms to work because of a teacher shortage and for failing to properly investigate, contact trace and communicate about COVID-19 exposure.

Sacramento City Unified “rejects these assertions," it said in an emailed request for comment that said the district works closely with public health officials and follows a detailed strategy for students and staff that allowed it, in this case and others, “to remain open while protecting the health of students and staff."

Sacramento City Unified is also suffering from a teacher shortage, like districts statewide, that has been “particularly acute" in its Independent Study program, said Superintendent Jorge Aguilar. More than 1,700 students have opted for online school and the district is still scrambling to hire 32 teachers.

Samantha Benton’s fourth grade son was still without a teacher four weeks into the fall term. She is among some 200 parents who have sent multiple letters to the district saying it has failed to provide both a safe learning environment and an equitable education online.

Benton, an ICU nurse, said she is keeping her kids in online school because she doesn’t trust the district’s safety protocols.

“The only way I would feel safe is if there were mandatory testing weekly, if everything was outdoors and if everyone eligible for a vaccine was required to get one,” she said.

Beyond the mask rules and vaccine mandates, many parents say discrepancies are simply illogical.

The city of Folsom in the Sierra Nevada foothills has two high schools. One school held a homecoming, the other will not.

Both schools allow students to remove masks at lunch and during passing periods, and they pack the stands unmasked at football games, said Ronda Sardo, whose son attends Folsom High, which is not allowed to have the outdoor dance.

“Sorry, kids. The school down the street gets homecoming and you don’t," she said.