Amid the faint heartbeat of San Francisco’s struggling Chinatown, delivery drivers have become the undisputed lifeline between restaurants and customers sheltering home.

Which is what prompted Aaron Lim to hatch a plan to deliver meals from his favorite Chinatown restaurants to friends and family living across the Bay Area — free of charge. Lim’s thinking was he could help get food to people, while driving business to his favorite restaurants.

As can sometimes happen with good deeds in hard times — especially those posted to Facebook — Lim quickly found his gesture of good will picking up more steam than a hot pork bun.

“It went from like 30 to 50 orders,” Lim said. “Then this past week I delivered over 70 orders to friends and family around the Bay Area.”

Since starting several weeks ago, Lim has been driving food orders to as far away as the Peninsula, eventually getting so many orders he started using centralized homes as hubs where people could pick up their deliveries. As the orders increase, he’s even thinking he may be the one in need of help.

“I think I may need to employ some friends and family to help me now because it’s becoming a lot,” he said with a laugh.

Lim, whose parents grew-up in Chinatown, said he has a deep affinity for the neighborhood, which has been hit especially hard by the COVID-19 pandemic. While many markets are busy, the area’s integral restaurants have struggled keeping doors open. On any given day, delivery drivers are a common sight at open restaurants.

But Lim said for many restaurants surviving on the margins, the technology required for app-based deliveries is too much for older restaurant owners to navigate — or the delivery fees take too big a bite from an already lean apple.

Roy Chan of the Chinatown Community Development Center said Lim’s one-man delivery campaign is becoming a source of inspiration for the neighborhood.

“And literally coming to a restaurant like Pork Chop House and ordering meals and delivering for friends and neighbors is an incredible grass roots effort,” Chan said. “It’s that spirit that we need in Chinatown right now.”

Lim has also launched a Facebook campaign to raise money for the Chinatown Community Development Center, which is delivering meals to seniors in the area. His initial goal was a few hundred dollars, but it so far has amassed more than $5,000.

Lim said his favorite restaurants to deliver from are New Fortune and New Lum Ting Cafe, which opened in 1908 and is famous for its pork chops. He said he hopes his effort can assure the restaurants will still be around once quarantine orders are lifted.

“Everyone’s having a tough time,” Lim said, “and I want to make sure that these businesses are taken care of.” 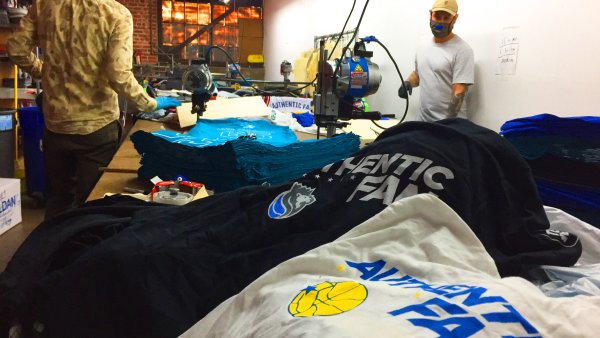