Roughly 3,700 homeless people are housed in San Francisco shelters, and cramped conditions are fueling fears the coronavirus could spread rapidly among one of the city’s most vulnerable populations

While San Francisco residents have been required to shelter in their homes and avoid close contact with others since March 17, roughly 3,700 homeless people have found refuge inside cramped San Francisco shelters, where adequate “social distancing” is nearly impossible.

Local lawmakers and homeless advocates described the conditions as a “ticking time bomb” and warn San Francisco homeless shelters could become the epicenter of a rapidly spreading outbreak of COVID-19.

Making It In The Bay

NBC Bay Area’s daily, in-depth commitment to exploring and finding solutions to the Bay Area’s housing crisis and other quality of life issues. 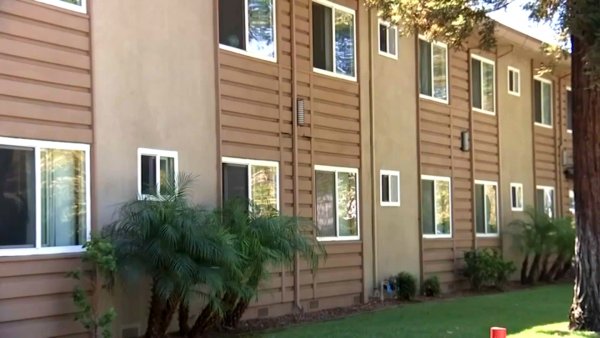 making it in the bay area 19 hours ago

“Why would you allow thousands of San Franciscans to sleep on top of each other,” said Jennifer Friedenbach, executive director for the Coalition on Homelessness.

“They have not depopulated shelters -- they are still packed,” she said during a hastily called press conference late Thursday to address news that a homeless shelter guest in the city had tested positive for the coronavirus.

In light of the coronavirus pandemic, San Francisco is now encouraging the homeless to pitch tents for protection. On just one block of Willow Street, between Polk and Larkin, at least 18 tents now line the street. (March 19, 2020)

On Thursday, the Department of Emergency Management revealed a guest at the Division Circle Navigation Center tested positive for COVID-19 one day prior.

“The person is not currently at the Navigation Center, is in good condition, and is currently recovering in an isolation hotel,” the statement said.

Following the announcement, five members of the San Francisco Board of Supervisors joined Friedenbach to criticize the city’s efforts to protect the homeless and demanded Mayor Breed begin utilizing the city’s vacant hotels as temporary respites for the roughly 5,000 unsheltered homeless across the city.

“We have the hotel rooms, we have the staffing, why wouldn’t we do this right now and save thousands of lives,” said Supervisor Hillary Ronen. "We have been given every excuse in the book why this isn’t possible."

Mayor London Breed detailed plans on Wednesday to reduce shelter populations across the city by opening new makeshift shelters, including one at the Moscone Convention Center with 390 shelter beds.

During a live-streamed "virtual" press conference, Breed announced Moscone West would begin housing the homeless on Thursday.  The Mayor’s plan, however, has yet to come to fruition.  The NBC Bay Area Investigative Unit learned Moscone West has not yet opened its doors to the homeless, despite the mayor's announcement.  A spokesperson for the city said the facility will start sheltering about 30 homeless people on Friday, but could not explain what was behind the delay, only saying the city "needed to complete the site preparation."

On Wednesday, Breed also defended the city’s decision to only utilize hotel rooms for those in need of self-quarantining, instead of simply housing anyone in need of shelter.

“I know that we have thousands of hotel rooms, here, in San Francisco and I know that people are asking, ‘Well, why don’t we just open the doors and let everyone who is homeless get access to a hotel room,’” Breed said.

“I wish it were that easy to help people…the capacity and the resources, in general, needed to provide the wrap around supportive services for many of these populations make it very difficult to just open the doors and allow anyone to walk in.”

One of those hotel rooms is now occupied by the navigation center guest who tested positive for COVID-19. Health officials say they’re now scrambling to track down anyone the guest may have contacted, disinfect the navigation center, and provide masks for residents and staff.

Many of those who spoke to NBC Bay Area’s Investigative Unit over the past few weeks said they worry about the virus’ spread inside the city’s shelters, where six feet of personal space is a rare luxury. Compared to the dangers of sleeping outside, however, most said it’s a risk they’re willing to take.

“You are limited in terms of your options, but I’d rather be in there than on the streets,” said Jake Shak, 31, who spoke to NBC Bay Area earlier this week outside one of the city’s largest shelters.

Although shelters have cut back on daily services and reduced capacity over the past few weeks, Shak said it’s still crowded.

“If you remember being in your high school gym locker, it’s similar to that,” Shak said.

Those waiting to check in at shelters are frequently standing shoulder-to-shoulder, and inside, guests say it isn’t much different.

“I don’t know if it’s possible to keep anybody safe in here,” said Genn Chryst, 63, a guest at the Bryant Navigation Center. “What are you going to do? You’ve got so many people crammed into a small area. If something really breaks out, you’re going to have problems. It seems like an impossible situation.”

Even before the first confirmed case of COVID-19 in a navigation center, many warned it was only a matter of time before the virus broke out in one of San Francisco’s congregate living settings.

SF Now Encouraging Tent Use As Protective Barrier for Homeless

Reducing the number of homeless encampments in San Francisco became a top priority under Breed's administration, but the city says tearing down tents is no longer the focus. In fact, San Francisco officials are now encouraging the use of tents as a sort of first-line of defense for the thousands of homeless who can't get into a shelter.

"That tent actually provides a barrier," said Jeff Kositsky, who manages San Francisco's Healthy Streets Operation Center (HSOC), an outreach team focused on housing the homeless and clearing out large tent encampments. "If somebody sneezes inside their tent, it's a lot better than if they're lying right next to somebody and sneeze in the open air."

Shelters in the city, equipped with about 3,700 beds, were already operating at maximum capacity well before the pandemic. As a result, there are at least 5,000 unsheltered homless in San Francisco, according to the city's latest official tally.

“For people who are on the streets right now, for people who are in crowded shelters, these are some of the worst places where the virus can be contracted and spread,” said San Francisco Supervisor Matt Haney, whose district includes SOMA and the Tenderloin, where most of the city’s shelters are located.

Haney, who describes the situation as a "ticking time bomb," said a coronavirus outbreak inside one of the city's homeless shelters could ultimately pose a danger to the entire city.

“It puts everybody in our city at risk, because if this virus spreads among people who are on the streets or in shelters, it’s going to affect all of us.”