Some U.S. states are rolling out aggressive reopening plans despite nationwide concerns there is not enough testing yet to keep the coronavirus from rebounding.

In a dispute that has turned nakedly political, President Donald Trump has been agitating to restart the economy, singling out Democratic-led states and egging on protesters who feel governors are moving too slowly.

Meanwhile, the death toll in the U.S. stood at nearly 45,000 — the highest in the world — with nearly 825,000 confirmed cases, according to a tally kept by Johns Hopkins University. The true figures are believed to be much higher, in part because of limited testing and difficulties in counting the dead. 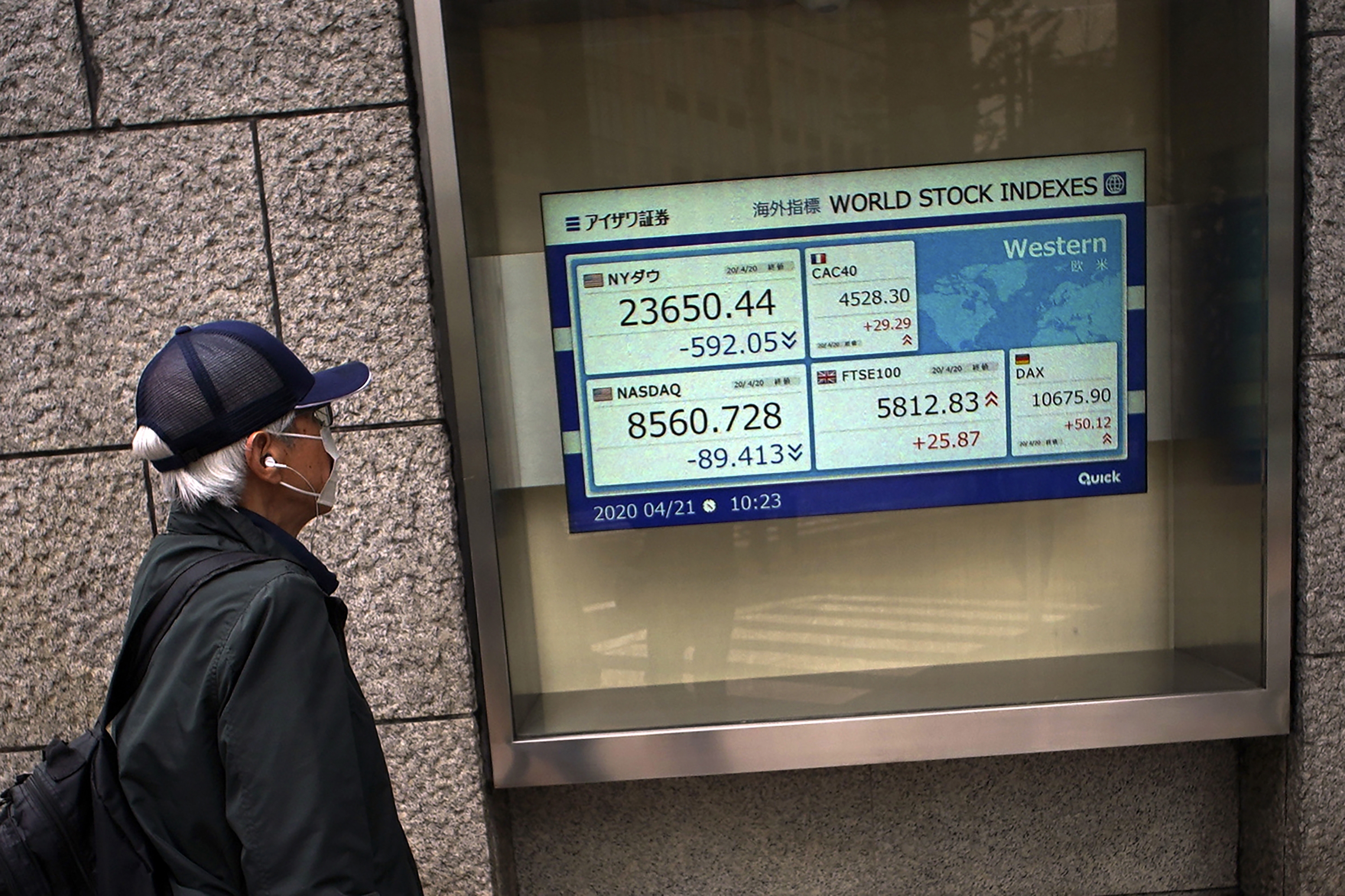 President Donald Trump announced what he described as a “temporary suspension of immigration into the United States” on Tuesday. But he said the executive order he plans to sign as soon as Wednesday would apply only to those seeking permanent residency and not temporary workers.

Trump said he would be placing a 60-day pause on the issuance of green cards in an effort to limit competition for jobs in a U.S. economy wrecked by the coronavirus. But he said there would be “certain exemptions” included in the order, which staff were still crafting Tuesday.

An administration official familiar with the plans had said earlier the order would be focused on preventing people from winning permission to live and work in the U.S. That would include those seeking employment-based green cards and relatives of green card holders who are not citizens. Americans who wish to bring immediate family to the country would still be able to do so, according to the official, who spoke on condition of anonymity before the plan was announced. About one million people were granted green cards last year.

While a hard stop on immigration would normally affect millions of people, much of the immigration system has already ground to a halt because of the pandemic. Almost all visa processing by the State Department has been suspended for weeks. Travel to the U.S. has been restricted from much of the globe. And Trump has used the virus to effectively end asylum at U.S. borders, including turning away children who arrive by themselves and putting a hold on refugee resettlement — something Congress, the courts and international law hadn't previously allowed.

A nearly $500 billion coronavirus aid package flew through the Senate on Tuesday after Congress and the White House reached a deal to replenish a small business payroll fund and provided new money for hospitals and testing. It now goes to the House.

Passage was swift and unanimous, despite opposition from conservative Republicans, and President Donald Trump tweeted his support pledging to sign it into law.

There are likely millions of Americans who were infected with coronavirus but never tested, according to Scott Gottlieb, the former head of the Food and Drug Administration.

Gottlieb said on CNBC' "Squawk Box" that the actual number of cases could be 10 to 20 times higher than the official count.

As of Tuesday afternoon, the number of confirmed cases in the country was more than 788,000, according to Johns Hopkins University's tally. That would mean more than 8 million to 15.75 million cases, or up to 4.8% of the U.S. population, CNBC reported.

Gottlieb's comments came after a study based on antibody testing in Los Angeles County suggested 442,000 adults in the county had been infected, despite an official count of under 8,000.

The LA study, as well as an earlier one in Santa Clara, California, have drawn some criticism from outside experts over their methodologies. Gottlieb said that they claim an ability to accurately detect antibodies that is “higher than any test on the market.”

“They might be pretty off, but most of the evaluations we have now, whether it’s from Seattle, or from Europe, or the ones out of New York, suggest that anywhere from 1% to 5% of people in hot spots have been exposed to this virus,” Gottlieb said.

Officials in Louisiana arrested a pastor who allegedly drove a bus at a man protesting the pastor's continued defiance of orders to stay at home to limit the impact of the coronavirus pandemic.

In a message on their Facebook page, the Central Police Department said Tuesday that Life Tabernacle Church pastor Tony Spell turned himself in on charges of aggravated assault and improper backing.

Earlier Tuesday, Debbie Dougherty, administrative assistant to the chief at the Central Police Department said Spell had driven a church bus in reverse in the direction of the sign-holding protester.

Spell already faces misdemeanor charges for repeatedly holding services despite a ban on gatherings of more than 10 people. Authorities have said they did not book him into jail previously because they did not want to add to the jail population at a time when the highly infectious disease is running rampant. They have not taken any action to close his church.

The U.S. Food and Drug Administration has issued the first authorization for an at-home COVID-19 testing kit. LabCorp, the diagnostics company producing the tests, says it will prioritize distribution for health-care workers and first responders who may have been exposed to the virus.

Using LabCorp's Pixel test, a patient can swab their nose to collect a sample at home and mail the specimen to the company's lab for testing, reducing the risk of exposure for health care workers.

LabCorp said it hopes to make the Pixel test kits available to consumers, with a doctor’s order, in the coming weeks.

The LabCorp test was approved through an emergency use authorization, which the FDA notes does not apply to other companies or self-collection tests.

“The FDA’s around-the-clock work since this outbreak began has resulted in the authorization of more than 50 diagnostic tests and engagement with over 350 test developers," said FDA Commissioner Stephen M. Hahn, in a news release. "Specifically, for tests that include home sample collection, we worked with LabCorp to ensure the data demonstrated from at-home patient sample collection is as safe and accurate as sample collection at a doctor’s office, hospital or other testing site. With this action, there is now a convenient and reliable option for patient sample collection from the comfort and safety of their home.”

As coronavirus spreads across the globe, many in the United States are wondering how they can get tested. Here is the process.

Tuesday Marks 3 Months Since 1st US Coronavirus Case. When Will Life Return to Normal?

Three months ago Tuesday, the U.S. confirmed the nation's first case of the novel coronavirus – a Washington state man in his 30s who had recently returned from Wuhan, China, the epicenter of the deadly outbreak.

The U.S. now has more cases than any other country in the world — more than 787,000 infections and over 42,000 deaths — with the majority of cases and fatalities concentrated in New York City, the outbreak's new epicenter. Worldwide, the virus has infected nearly 2.5 million people and caused more than 170,000 deaths.

Interactive: How the Coronavirus Has Changed Our Lives

The lockdowns and closures sent jobless claims soaring. A record 22 million people have filed for unemployment — by far the worst run of U.S. job losses on record. Some economists say the unemployment rate could reach as high as 20% in April, which would be the highest rate since the Depression.

And even as states and regions with declining coronavirus infections begin loosening restrictions on lockdown orders and begin the gradual reopening of businesses and schools, it doesn't look as if life will be returning to normal anytime soon. Some places could see at least some restrictions remain in place through the end of the year because of concerns there is not enough testing yet to keep the coronavirus from rebounding.

President Trump says he wants to reopen the economy and return Americans to work by May 1st. At the same time, health experts warn without more aggressive testing for the COVID-19 coronavirus, the country may not be ready.

This year’s Scripps National Spelling Bee has been canceled after U.S. organizers concluded there is “no clear path to safely set a new date in 2020” because of the coronavirus pandemic.

The decision announced Tuesday by Scripps means kids who are in eighth grade this year will miss their final opportunity to compete in the national finals. Scripps won't change eligibility requirements for next year’s bee, which is scheduled for June 1-3, 2021, at a convention center outside Washington.

Televised by ESPN since 1994, the bee had only previously been canceled in 1943-45 because of World War II. The first Scripps bee was held in 1925.

Scripps had announced on March 20 that this year’s bee would be postponed but did not commit to a new date.