The U.S. on Friday set a new record of more than 73,000 coronavirus cases reported within a single day as the total numbers climb to over 3.6 million cases and nearly 140,000 deaths, according to NBC News.

About 73,800 cases have been reported by 7 p.m. ET. The number of new cases Friday is expected to rise before the day's end. The previous record of 72,878 was set on Thursday.

Several states have been reporting record numbers this week, contributing to a surge in the national death rate. The seven-day rolling average for daily new deaths has risen 34% from two weeks ago, while the case count in that period shot up 43%.

Miami area authorities, meanwhile, began aggressively enforcing mask requirements as Florida reported another 128 deaths and more than 11,000 new cases. In Minnesota, hospitals urged Gov. Tim Walz to impose a statewide mask mandate as the positivity rate and new case counts in the state are rising again. At least half of the 50 states have adopted requirements for wearing masks or other facial coverings.

But in Georgia, Gov. Brian Kemp has banned cities and counties from requiring face coverings. He sued Atlanta late Thursday to prevent it from defying his order, but Atlanta Mayor Keisha Lance Bottoms said she was prepared to go to court to maintain the local mask requirement.

Another New High Set for Virus Patients in Georgia Hospitals

Large numbers of infections keep getting confirmed every day, more people keep being hospitalized, and deaths are climbing as the coronavirus continues its march through Georgia.

Wednesday's numbers showed nearly 2,800 people hospitalized statewide with the COVID-19 respiratory illness, the highest on record and a number that's nearly doubled since the beginning of the month. The state reports 84% of hospitals' available critical beds are in use, although some hospitals say they have opened up more space and have more room.

Georgia overall had nearly 128,000 confirmed infections and nearly 3,100 deaths overall as of Wednesday, although experts say many more people get the illness but are never tested. For most people, the new coronavirus causes mild or moderate symptoms. Most recover, but some can become severely ill or die.

The state has been seeking new hospital beds to handle the record-setting number of people admitted with the virus. Gov. Brian Kemp's administration on Tuesday signed a deal with Piedmont Healthcare, one of four large hospital systems in the Atlanta area, to open 62 beds in a new tower at the system's main Atlanta hospital. The state is providing nurses to staff the beds off a contract with a private staffing company. A Kemp spokesperson on Wednesday could not immediately say how much the state was paying Piedmont or how long the deal would last.

Teams of military medics were deployed in Texas and California to help hospitals deluged by coronavirus patients.

In California, military doctors, nurses and other health care specialists were being deployed to eight hospitals facing staffing shortages amid a record-breaking case numbers. In Houston, an 86-person Army medical team worked to take over a wing of United Memorial Medical Center.

The leading manufacturer of N95 masks in the U.S. says it has investigated 4,000 reports of fraud, counterfeiting and price gouging in connection with the product and has filed 18 lawsuits.

3M, based in Maplewood, is among the largest global producers of the N95 mask, which has been approved by the U.S. National Institute for Occupational Safety and Health.

3M says courts have issued six temporary restraining orders and four preliminary injunctions so far to stop N95 sales that it says are unlawful. The company says in some cases, it has led to criminal charges.

“The schemes we shut down were not only unlawful, they also endangered lives and wasted precious time and resources by diverting buyers from legitimate sources of much-needed respirators,” said Denise Rutherford, 3M senior vice president of corporate affairs.

In one case filed in U.S. District Court in Minnesota, 3M sued Legacy Medical Supplies and four people connected with the company, claiming they were trying to sell 3M brand N95 respirators at a 75% to 267% markup over 3M’s list price, the Star Tribune reported.

Atlanta Mayor Keisha Lance Bottoms said Friday that she thinks it’s no coincidence that Georgia’s governor filed a lawsuit against her over her city’s mask requirement a day after she said President Donald Trump violated it during his visit Wednesday.

“This filing of a lawsuit is simply bizarre, quite frankly,” Bottoms, a Democrat, said in an interview with NBC’s TODAY show.

The lawsuit, which comes amid a sharp rise in COVID-19 cases in the state, argues that Bottoms exceeded her authority in issuing orders in response to the coronavirus that stricter than those imposed by the state government.

Bottoms said she thinks Republican Gov. Brian Kemp “is putting politics over people,” adding that the governor didn’t know until well into the pandemic that coronavirus could be spread through asymptomatic carriers. In an interview on CBS "This Morning," Bottom said Kemp “is a Trump loyalist and he seems to work very hard to please the president of the United States, and that is often at the expense of the people in our state.”

Kemp defended the lawsuit during a press conference Friday morning, accusing Atlanta officials of playing politics and not enforcing state orders already in effect. Kemp said the lawsuit was filed “on behalf of business owners, their employees and hardworking Georgians throughout the region who continue to struggle to make ends meet.”

“The governor has simply overstepped his bounds and his authority, and we'll see him in court,” she said, adding, “I absolutely think that I will prevail.”

Medical professionals from across the country rushed to New York City when it became the center of the pandemic in the U.S. in March and April, but now they are alarmed by what they're seeing in their own backyards as their home states report record numbers of cases.

"Recently I go into the store and I feel I'm the only one there wearing a mask. Even the people working there aren't wearing masks, which just blows my mind," said Baule, who said he wears a mask whenever he leaves the house. "People just don't realize. You don't realize it until you see how bad it is."

Baule remembers well the chaos of those days at Elmhurst, when medical staffers were doing anything and everything just to keep up. Pediatricians were transporting patients, plastic surgeons were doing ventilator inventory, and he was working in the intensive care unit managing critical care patients, he said.

A new report by the Centers for Disease Control and Prevention is confirming other studies that have said the first cases of the coronavirus studied in New Yorkers came from Europe and other places in the U.S., NBC New York reported.

The airport screenings and bans on foreign nationals traveling from China implemented on Feb. 2 and restrictions for travelers from Europe implemented on March 13 did nothing to stop or slow the spread of SARS-CoV-2, the virus which causes COVID-19, because it was already in New York City, according to the report released Thursday.

Using data collected from patients with influenza-like symptoms at six New York City emergency departments (two in Manhattan, two in Queens, one in Brooklyn and one in the Bronx) during March 1–20, the NYC Department of Health and Mental Hygiene found that out of 544 people, 36 were SARS-CoV-2–positive with specimens resembled those circulating in Europe.

Five out of the six emergency departments were selected due to their usage by patients residing in ZIP codes with a high proportion of Chinese speakers, the report said. However, none of the samples collected were directly connected to sequences from Wuhan, China, where the outbreak originated.

Michigan liquor regulators on Thursday ordered an East Lansing bar to answer questions about a coronavirus outbreak that infected 186 people and was a factor in Gov. Gretchen Whitmer's decision to halt indoor service at establishments that chiefly sell alcohol.

A hearing, scheduled for July 23, could result in a license suspension or revocation for Harper's Restaurant and Brewpub, which currently is closed. But the purpose primarily is fact-finding, said Jeannie Vogel, spokeswoman for the state Liquor Control Commission.

The outbreak occurred last month and attracted widespread attention, shortly after bars and restaurants were allowed to reopen for in-person service following a monthslong shutdown to slow the spread of the disease. The order points to news outlets having shown large crowds inside the bar not adhering to social distancing or wearing masks despite the governor's order, which allowed customers to remove their face coverings only while seated.

Regulators want Harper's to “show cause” as to the status of its licenses, answer questions on what steps it took or failed to take to comply with the governor's measure, and demonstrate that its plan for reopening will protect patrons and employees from another outbreak. Of the 186 COVID-19 cases linked to the bar, 144 of the infected people visited the establishment and 42 others were likely infected by someone who went there, said Ingham County Health Department spokeswoman Amanda Darche.

A message seeking comment was left with Harper's owners. 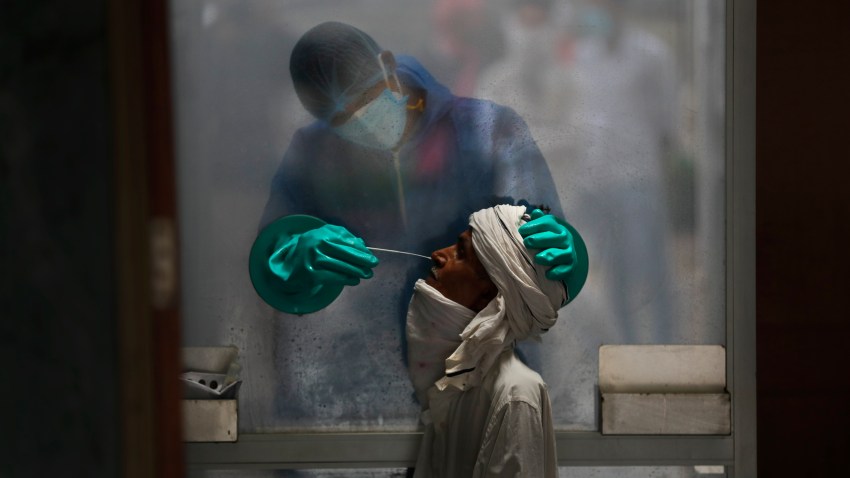 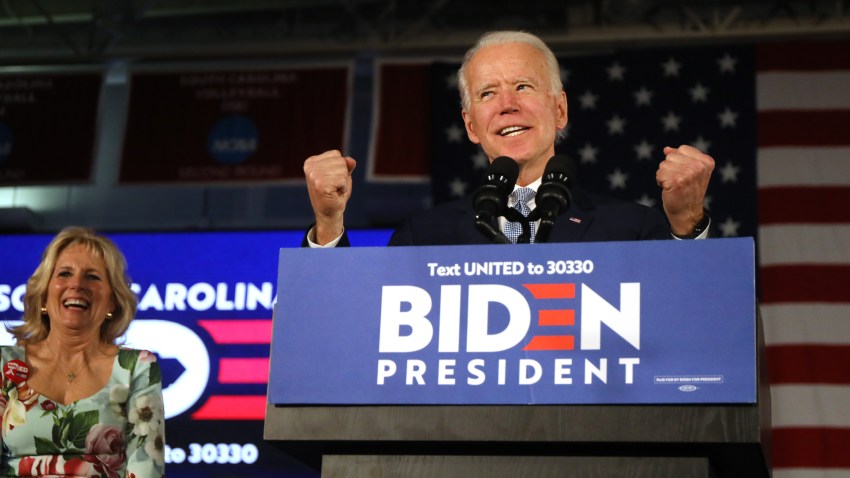 Dallas County Health and Human Services issued an order Thursday requiring all Dallas County schools to delay in-person education and extracurricular activities until after Sept. 7 due to the surge in COVID-19 cases and hospitalizations, NBC DFW reported.

The order said no schools can re-open for on-campus, face-to-face instruction until after Labor Day weekend, and that all school-sponsored events and activities, most notably clubs and sports, will not take place until on-campus instruction resumes.

Remote or distance learning can take place prior to Sept. 7.

Parents from across the country are expressing conflicting emotions about school reopening plans for the fall. Some parents want to keep their children out of school until there is a vaccine while others believe that children will suffer mentally and emotionally without proper in-person instruction.
The Associated Press/NBC