More than a month after the death of George Floyd in police custody, rallies and protests have continued across the country — calling for systemic change to police departments and reallocation of police funds toward education and social services.

Though the crowds at these events often speak and chant with a unified voice, they are made up of thousands of individuals, each with their own reasons for being there. Here are just a few of them, in their own words.

Lorraine Hanks took the stage at a Black Lives Matter rally in front of San Francisco City Hall, looking out at a crowd of mask-wearing demonstrators holding up cardboard signs. A mother and a youth advocate, Hanks said it's not fair that young Black men leave home not knowing whether they'll return alive.

Mom and youth advocate Lorraine Hanks explains why #BlackLivesMatter is important to her.

Speaking at a rally in San Francisco, Mildred Coffey reminded the crowd that the groundswell of support behind Black Lives Matter is a continuation of work that began during the civil rights battle of the mid-20th century. While soft-spoken in conversation, her remarks to the crowd were anything but quiet, demanding action and eliciting cheers.

Mom and parent organizer Mildred Coffey speaks about racial injustice and her commitment to #BlackLivesMatter.

Dhalimu Robinson moved to the Bay Area from Harlem, New York City — and said he's found Northern California to be "a new place with the same old problems." Marching through the streets of San Francisco, he said no matter where he goes, he's dogged by the same fear that even a routine interaction with police could spell the end of his life. That needs to change right now, he said.

Dhalimu Robinson, who moved to the Bay Area from Harlem, New York City, talks about the racial injustice he's seen in both places.

Iris Manriquez said the San Francisco march for Black Lives Matter on Juneteenth marked the first time she'd ever taken part in a public demonstration or protest of any sort. Even amid concern over the spread of the novel coronavirus, she and Melissa Aceves said telling the world that Black Lives Matter is simply too important for them to stay home.

At a #BlackLivesMatter march in San Francisco, Iris Manriquez and Melissa Aceves explain the importance of being there, even during a pandemic.

Rapping about corruption and injustice, young hip hop artists vtizzel and Barnzilla performed some of their original songs at a Black Lives Matter rally in San Francisco. The two say the death of George Floyd was a tipping point that's allowed society to begin having uncomfortable and long-overdue conversations around racism and how to change it.

Young hip hop artists vtizzel and Barnzilla rap about injustice and corruption, and explain why the groundswell around #BlackLivesMatter is a moment not to be wasted.

Philipine Hebly came to the United States from the Netherlands to work as an au pair. She quickly discovered that the reality she now lives in America is much different from the one that's experienced by her Black friends. Hebly joined a San Francisco Black Lives Matter march to demand change to a law enforcement establishment she says is stacked against young men of color.

A recent immigrant from the Netherlands, Philipine Hebly explains the culture shock of realizing that her Black friends in America live in a different reality than she does. 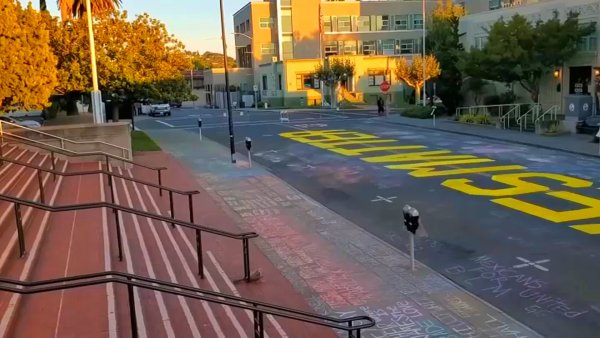