Around 300 people gathered to pay tribute to Betty Reid Soskin, Richmond's beloved national park ranger who recently retired at the age of 100, in a moving sendoff Saturday at Richmond's Craneway Pavilion.

Surrounded onstage by officials including Chuck Sams, director of the National Park Service, Soskin thanked the audience and the Park Service in a brief speech. Sams presented Soskin with a plaque in the shape of the arrowheads worn by park rangers on the shoulders of their uniforms. 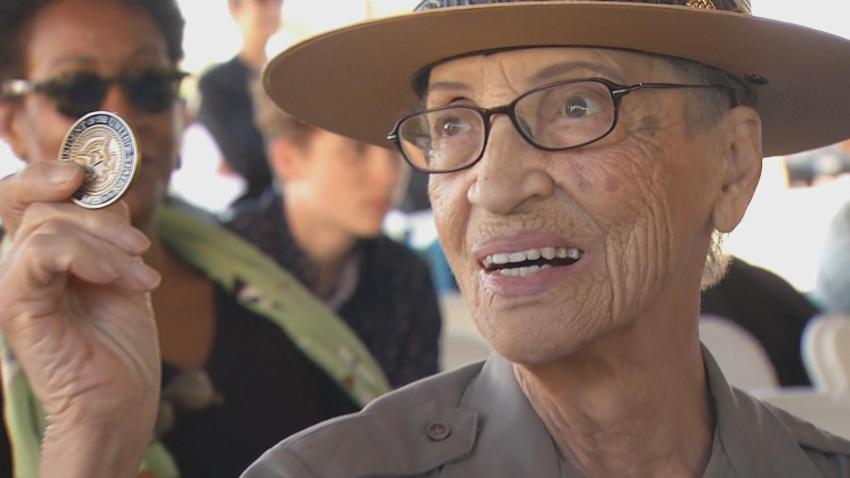 To be a part of helping to mark the place where that dramatic trajectory of my own life, combined with others of my generation, will influence the future by the footprints we've left behind has been incredible," Soskin said in a statement March 31.

The park is in the same group of buildings as the Craneway, where the ceremony was held.

As a park ranger and author of a memoir titled "Sign My Name to Freedom," Soskin told her story as a trailblazing African American woman who co-owned her own business and became a park ranger at the age of 85.

Another trailblazer, U.S. Secretary of the Interior Deb Haaland, honored Betty in a video that aired as part of the ceremony. Haaland is the first Native American to serve as a cabinet secretary.

In a separate ceremony before the event began, Sams also presented a challenge coin to Soskin. Being given a challenge coin represents comrade or unity and proves membership of a certain group, as well as honoring the actions of those who receive them.

"The National Park Service is grateful to Ranger Betty for sharing her thoughts and first-person accounts in ways that span across generations," said Naomi Torres, acting superintendent of Rosie the Riveter/WWII Home Front National Historical Park, in a March 31 statement.

"She has used stories of her life on the Home Front, drawing meaning from those experiences in ways that make that history truly impactful for those of us living today," Torres said.