The family of a mentally ill man who died in a Danville police shooting received only partial justice after jurors convicted an officer of assault with a gun but deadlocked on a charge of voluntary manslaughter, their attorney said.

Andrew Hall could now face up to 17 years in prison for shooting 33-year-old Laudemer Arboleda in 2018 in Contra Costa County. Jurors deliberated barely two days before reaching the verdict Tuesday.

“We received a piece, a part of justice, partial justice,” said Adante Pointer, the family’s attorney, who told the Bay Area News Group that it was “a big step” but added: “the fight isn’t over.”

Hall remains free until his Jan. 14 sentencing. But the felony conviction makes him ineligible to continue serving as a law enforcement officer.

Hall shot Arboleda nine times following a slow-speed chase in Danville. His attorneys argued that he acted in self-defense while prosecutors said the county sheriff’s deputy acted rashly, unsafely and with excessive force.

During Hall’s three-week trial, prosecutors and defense attorneys presented competing narratives, alternately asking the jury to sympathize with the deputy’s need to make split-second decisions or the troubled victim whose only crime was not stopping for police. 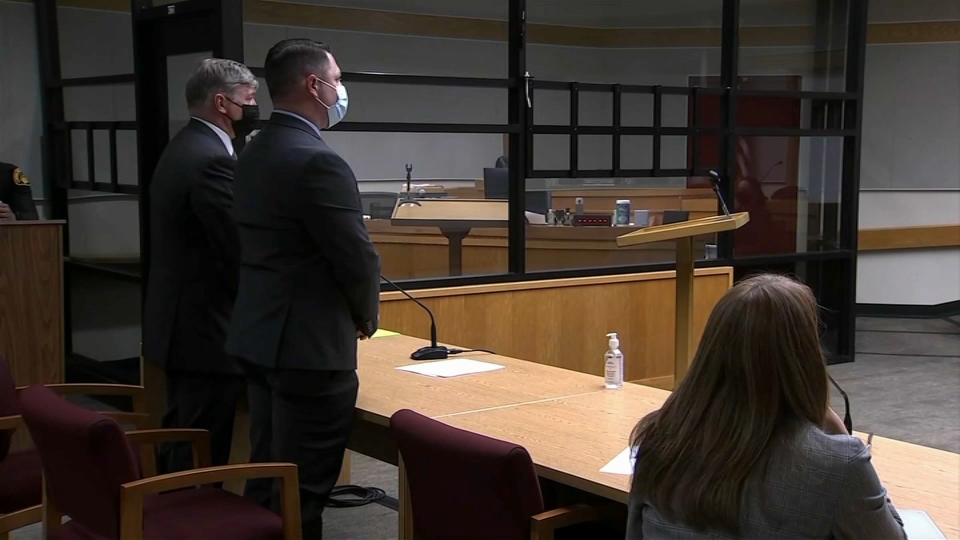 Hall returned to duty after the Contra Costa County Sheriff’s Office cleared him of misconduct after its own nine-month investigation.

The county district attorney’s office only filed felony charges against him this April. They were announced a day after a jury convicted Minneapolis police Officer Derek Chauvin of killing George Floyd, a shooting that set off nationwide calls for social justice.

The events unfolded on Nov. 3, 2018, when a Danville resident called 911 to report that a man later identified as Arboleda was knocking on doors and lingering outside homes in a cul-de-sac.

Just months before his encounter with Hall, Arboleda was involuntarily committed to a psychiatric hospital for three weeks and prescribed medication for psychosis and schizophrenia, his family has said.

When county sheriff’s deputies arrived, they saw Arboleda get into into his car and drive away.

Arboleda led officers on a 9-minute, slow-speed chase through Danville.

Hall heard about the pursuit over his patrol car radio and stopped his vehicle at an intersection to block Arboleda’s car.

Police video shows Hall stepping in the path of Arboleda’s vehicle and firing a volley of shots into the windshield and passenger-side window.

During opening remarks at Hall’s trial, prosecutor Colleen Gleason presented dashboard and bodycam footage showing Hall jumping out of his car, running up to Arboleda’s vehicle and firing repeatedly.

Hall’s lawyers said the officer feared for his safety, and used body cam footage from different angles to show the right front tire of Arboleda’s car was pointed at Hall when the shooting started, indicating it was heading in his direction.

“For them there was no acknowledgement that (Arboleda) was killed wrongfully by the police. They thought he should have been charged with murder, not manslaughter,” said Burris, who nonetheless felt the verdict showed progress.

“It sends a message to other police officers that clearly you can be prosecuted and you can be convicted,” said Burris, whose roster of high-profile police violence cases includes those of Rodney King and Oscar Grant.

Hall’s attorney, Harry Stern, told the Bay Area News Group that the verdict was unwarranted and he planned to appeal.

The district attorney’s office said it is deciding whether to pursue a retrial on the charge.

Hall’s “actions were not only a crime, but they tarnished the badge and they harmed the reputation of all the good, hard-working police officers that work for our community,” District Attorney Diana Becton said in a statement.

Beaton was criticized for the years-long lag in filing criminal charges both by activists and four of her own prosecutors, who said such lengthy delays erode public and police confidence in the legal process.

The charges came six weeks after Hall, who is white, shot and killed another man, Tyrell Wilson, a Black homeless man whose family said was suffering from depression and paranoia. The shooting of Wilson remains under investigation.