The bustling population of San Francisco’s Civic Center plaza grew by forty bodies last week — all thanks to an unusual new cadre of art.

The temporary population bump came from London-based artist Zak Ové, whose installation of 40, six-and-a-half foot tall graphite figures forms a project he calls Invisible Man and the Masque of Blackness. The installation is scheduled to remain outside City Hall until November.

"I was interested in these pieces as a rebuke to that situation," Ové said during a break from the installation, "and also to speak to the future of an African diaspora."

Ové fashioned the figures as larger-than-life versions of a smaller African art figure given to the artist by his father, famed Trinidadian filmmaker Horace Ové who is recognized as the first black British filmmaker to direct a feature-length film.

The characters stand with arms raised — which in the U.S. has already elicited comparisons of the Black Lives Movement which Ové acknowledges as a racial flashpoint not only in the U.S. but around the world. Arriving last week in the Bay Area, Ové said he quickly became aware the difficult status for African-American men. 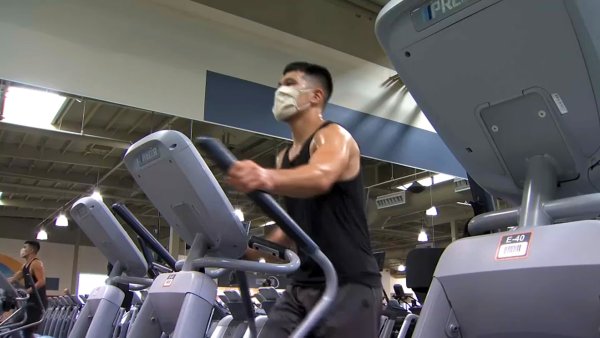 Indoor Mask Mandate Returns in Most Parts of the Bay Area

Kate Patterson, spokeswoman for the San Francisco Arts Commission which along with the Office of Economic and Workforce Development is presenting the project, said visitors will form their own interpretation of the artworks.

"It is a wonderful 40-sculpture installation," Patterson said, "that speaks a lot about identity and race and has all kinds of interesting messages to convey."

Ové crafted his pieces out of graphite, which isn’t a typical material in sculpture making. The sleek, black sculptures have the color and texture of a pencil lead.

"I wanted to use a fabric that moved them across the millennium," Ové said, "and into kind of the realm of modern contemporary sculpture making."

The pieces form a miniature army, framed against the gilded dome of city hall but facing away from the edifice. As workers installed the various pieces, Ové fussed over their arrangement, searching for the sweet spot of maximum visual impact.

He said the like that the pieces appeared to be standing in "noble gesture, very proudly and very peacefully making protest."

As the last pieces assumed their final ranks, he darted in and out of their lines, snapping pictures on his phone and taking in the expressions of visitors who did the same.

"It's almost like a selfie booth — they can have a guy for themselves, they can take pictures, they can embrace him," Ové offered. "So in a way you can build a relationship with this installation. You know, it'll become your friend."