San Francisco moved into the state's yellow COVID-19 pandemic reopening tier Tuesday, the first Bay Area county to do so since the state's stay-at-home order was lifted in January.

The move to the yellow tier will allow San Francisco to expand indoor operating capacities for most business sectors to at least 50 percent while also expanding capacities for live spectator events like sports and festivals.

Bars that do not serve meals will also be able to reopen indoors in the yellow tier at 25 percent capacity or 100 people, whichever is fewer.

The new guidelines are a game changer for business owners such as Gina La Rocca, co-owner of Sabella and LaTorre Seafood Restaurant at the Fisherman's Wharf.

"We’ll take all the business we can get, and there’s just not a lot of people yet," she said.

She and her business partner credit locals with helping them get through the pandemic so far, but this move brings hope of a day soon where profits are possible and not just survival.

"We can have more customers. We can serve more people, keep people at our bar a little bit now," La Rocca said.

Check out the chart below to see what else changes in the yellow tier.

"This is an incredible milestone for us to hit as we move forward on our path to recovery, and it is possible because of how well we are doing in our efforts to vaccinate everyone we can in this city and how well the people of San Francisco have done listening to public health officials," San Francisco Mayor London Breed said in a statement.

Mayor Breed and Speaker of the United State House of Representatives, Nancy Pelosi, made the announcement Tuesday morning.

"I don’t know about you Madam Speaker, but it feels good," Mayor Breed said.

San Francisco was the only Bay Area county to move into the yellow tier last fall before the state's winter surge in cases.

"We are record-breaking, for the country, in the success of San Francisco thanks to the leadership of Mayor Breed," Pelosi said.

That tier change was driven mostly by increases in outdoor activities, which carry lower chances of transmission, according to health experts. 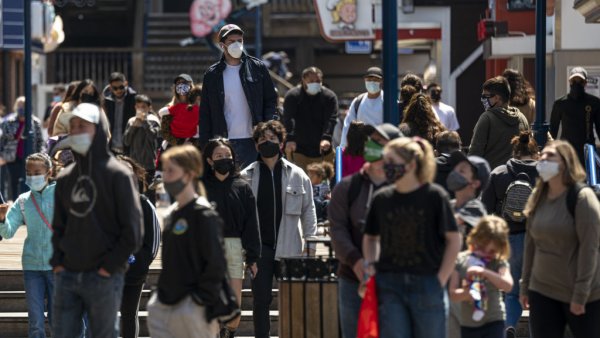 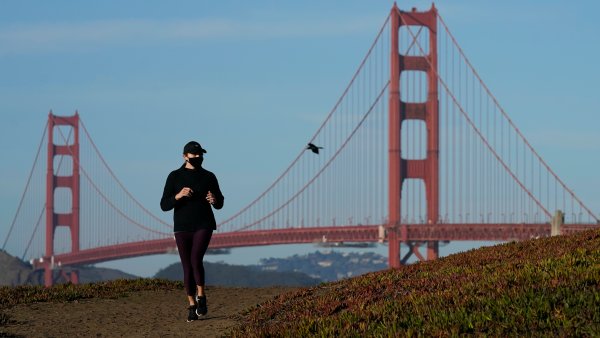 San Francisco to Update Guidelines for Wearing Masks Outside

The city is averaging just 26 new cases per day, the lowest number since June 2020, and fewer than 20 people are currently hospitalized due to the virus for the first time in more than a year. The city's test positivity rate has also fallen to just 0.6 percent.

Roughly three-quarters of the city's residents age 16 and up have received at least one vaccine dose, according to city health data.

Vaccination rates are even higher for vulnerable groups like those over 65, 86 percent of whom have received at least one vaccine dose. In addition, 73 percent of those over 65 are fully vaccinated.

"Thanks to the collective efforts of San Francisco residents and workers, we are making great progress to continue on this trajectory," San Francisco Department of Public Health Director Dr. Grant Colfax said in a statement. "It is essential that everyone take the opportunity to get vaccinated as soon as possible and encourage coworkers, friends and family members to do the same."

Colfax added that declining vaccination rates and reopened business sectors have forced some other states, including Oregon and Washington, to pull back on their reopening plans and cautioned that city residents should continue heeding public health guidance.

The updated guidance will be made publicly available at https://sf.gov/topics/reopening.