The San Francisco Opera will once again hit the stage of the War Memorial Opera House on Saturday for the first time since December of 2019, a pandemic-induced intermission that has deprived opera fans of their in-person high notes for some 20 months.

The opera company is marking its return with a symbolic five-show run of Tosca, its first production when it opened in the newly-built War Memorial building in 1932, during the lows of the Great Depression.

"Here we are having faced another tremendous crisis," said Tosca director Shawna Lucey, "and we’re going to reopen the opera house with this beloved title again."

On Wednesday, the War Memorial opened to a strange sight for the strange these times; patrons turning out to fill the seats for a final dress rehearsal of Tosca. The lights dimmed and the curtain rose as audience members settled in for a drama that seemed a welcome escape from the drama they've endured over nearly two years.

This time, the ritual had a bit of a different feel as patrons are required to wear masks and show proof of Covid vaccination. That all seemed to subside as the orchestra kicked-in and the singers hit the stage. 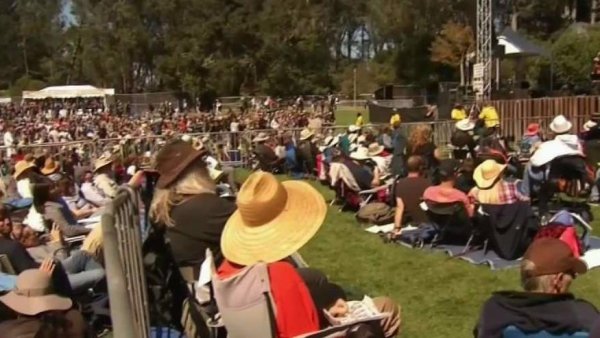 The performance was more than just knocking the dust off a well-worn operatic classic. Aside from working the kinks out of technical systems and the new Covid protocols, it also marked new music director Eun Sun Kim's debut in the opera house. On Wednesday she energetically waved her baton and mouthed the words to passages of Tosca, with Italian being among the six languages she speaks.

"The music is phenomenal, it is passionate," said Lucey. "It is absolutely relatable, the story itself is completely compelling."

While the opera company was shut down for a long spell, it wasn't without activity. In the downtime, the company's crafts people constructed a new stage for the opera Fidelio that could be used inside and outside. The opera took advantage of that versatility by using the new stage during a limited run of Barber of Seville, performed outside drive-in style in Marin's Civic Center.

Workers in the costume shop also used the break in production to sew PPE masks for charities using leftover costume fabric -- and even teamed-up with an UCSF doctor to develop a special cloth Covid mask that allowed the company's performers to safely sing together.

And in a development that will likely be appreciated by the hind quarters of every patron, the opera replaced the War Memorial's aged 90-year-old seats for the first time.

Like everyone else involved with the production, Shilvock was euphoric to see patrons back in those new seats, breathing life back into the venerable opera house -- releasing a thunder of happy applause as the sad story wound to a close.

"There is nothing like coming back to this building, seeing the full orchestra in the pit, the full chorus on stage," Shilvock said, "and just feeling that huge rush of emotion and sound coming at you."