The Santa Clara County District Attorney’s Office walked back a recent public statement this week that it would not file criminal charges against a Palo Alto police officer accused of excessive force.

The officer in question is retired Palo Alto police Sgt. Wayne Benitez. In 2018 Benitez was among a group of officers caught on camera pulling Gustavo Alvarez from his Palo Alto home over a possible suspended driver’s license.

The video captured Benitez striking the handcuffed man at least once before lifting Alvarez’s head and slamming it into a car windshield. After the arrest, Benitez’s body-worn microphone captured the officer seemingly encouraging the use of force by Palo Alto officers, and later, mocking Alvarez for being gay.

In a public statement first published Sunday in the Palo Alto Daily Post, District Attorney spokesperson Sean Webby said his office was “deeply disturbed” by the incident, but there was not enough evidence to support a felony charge against Benitez. 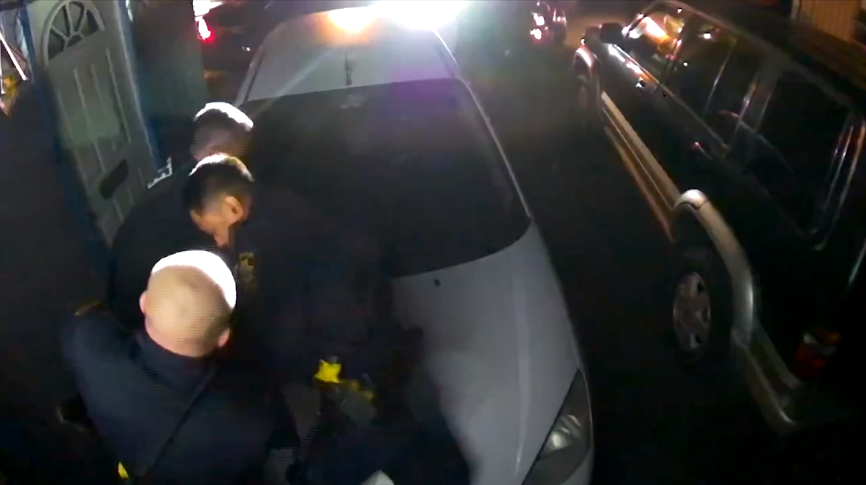 “Mr. Alvarez alleged that he suffered various injuries as a result of Benitez’s use of force, but despite our best efforts, we could find no evidence to corroborate that allegation,” Webby said in a written statement. “Misdemeanor cases have a one-year statute of limitations, and this case came to our attention after that time had passed. Felony cases have a three-year statute of limitations, but in our view the evidence does not support felonious assault under the color of authority. Wayne Benitez violated Mr. Alvarez’s civil rights, and for that, Mr. Alvarez was justly compensated in a separate lawsuit and Benitez deservedly lost his job. By those measures, justice was served.”

But by Tuesday, the District Attorney’s office had walked back that statement, saying the office had received access to new, “potentially relevant evidence” from Alvarez’s attorneys.

“We are in the process of collecting and evaluating that evidence, which will factor into whether we modify our charging decision,” Webby said in a statement emailed to NBC Bay Area Tuesday. “We will promptly communicate our charging decision to the public at the conclusion of our review.”

In a Thursday interview, Alvarez’s attorney Cody Salfen blasted the District Attorney’s statement, saying his office had long ago provided all the evidence prosecutors might need in their review. He also accused the office of having a double standard when it comes to prosecuting police officers.

Salfen also criticized the District Attorney’s Office for taking what he said was an overly-narrow view of the case.

“They’re confusing the general public with respect to what the standard is to charge someone with a felony in the assault category,” Salfen said. “Regardless of the type of injuries or the extent of the injuries that Gustavo sustained, the acts alone of slamming him onto the hood face first into a windshield, those acts constitute felonious conduct. You could suffer no injuries and that still would constitute a felony because the method of the injury of slamming someone into a windshield is likely to produce great bodily injury. And in this case, it did.”

Salfen claims the District Attorney’s Office made no attempts to contact medical experts who examined Alvarez after his encounter with Palo Alto police officers, such as a neuropsychologist who examined Alvarez last October.  Salfen says that neuropsychologist diagnosed him with a Mild Traumatic Brain Injury, and found he meets the criteria for Post-Traumatic Stress Disorder based on Alvarez’s self-reported symptoms.

Meanwhile, as the District Attorney’s office reconsiders the case against Benitez, NBC Bay Area first reported last week that the FBI’s Civil Rights Division had opened an investigation into the incident.

While the FBI’s investigation may encompass additional cases, or could be a review of the entire department, court records obtained by NBC Bay Area’s Investigative Unit show the FBI has been probing the Benitez incident for months. Last fall, a Bay Area-based FBI agent faxed a request to the Santa Clara County Superior Court requesting records from the case.

“The FBI is requesting all court proceedings to include initial complaint and motions for criminal case B1896518 in the matter of The State of California vs Alvarez, Gustavo in support of an ongoing FBI investigation,” the agent’s request stated.

Neither the Palo Alto Police Department nor attorneys for Benitez responded to interview requests from NBC Bay Area.