David Nguyen was a month away from achieving his dream of being sworn in as an Alameda County Sheriff’s deputy. Now, those dreams are shattered.

Someone shot and killed the 28-year-old recruit Tuesday as he was driving toward the Bay Bridge toll plaza.

"When I got the call from the deputy about my brother’s passing, I thought they were joking," said Barbara Nguyen, David's sister.

Hours after that call, Barbara found herself watching as heartbroken members of the Alameda County Sheriff’s Office led a procession for her brother as he was taken from Highland Hospital to the coroner’s bureau.

"He was able to get into the academy just through resilience and through hard work, and I’m so proud of him for that," Barbara said.

At about 4:30 p.m. Tuesday, the California Highway Patrol learned that a man in a Toyota Prius – later identified as David Nguyen – crashed into a guard rail at the MacArthur Maze as he was heading toward the Bay Bridge toll plaza. The CHP said David was hit by a single bullet that came from the right-hand side. A sheriff’s office spokesperson said David was likely driving home to San Francisco.

"Living in the Bayview-Hunters Point, we were always surrounded by a lot of crime," Barbara said.

A 28-year-old man who dreamt of becoming a sheriff’s deputy in Alameda County became the latest person to get shot and killed while driving along an interstate in Oakland. Cheryl Hurd reports.

Barbara said her brother’s passion for law enforcement started early and that he also joined the California National Guard. A spokesperson confirmed he was part of the 870th Military Police Company based in Concord.

"We got through the struggles of being low income, being a first generation family," Barbara said. "I got through it cause of him."

The freeway shooting is under investigation. 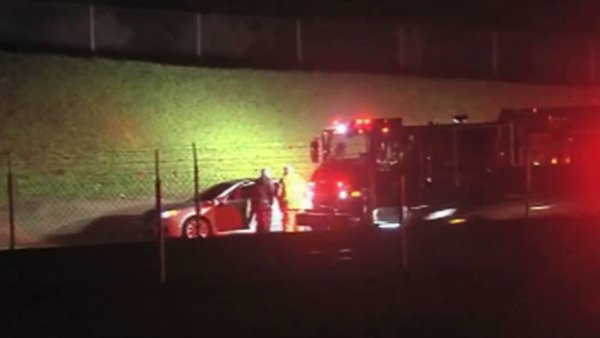 The CHP is asking for the public's help in tracking down the shooter.

"If your vehicles happen to have onboard cameras or if you saw anything no matter how inconsequential you think it may be, be please contact us," CHP Sgt. Raul Gonzalez said.