Projectiles will "only be used in situations where a person is actively attacking an officer or another person or when an armed agitator poses a threat to officers or other peaceful protesters."

Despite backlash from San Jose Mayor Sam Liccardo and community activists, the City Council voted 10-1 on Tuesday to allow police officers to continue the use of rubber bullets and other projectile impact weapons in some crowded situations if they are directly attacked.

San Jose Police Chief Eddie Garcia banned the use of rubber bullets as a method of crowd control on June 16, so officers could no longer use them to control crowds, only to defend themselves.

However, Liccardo said that was not enough. 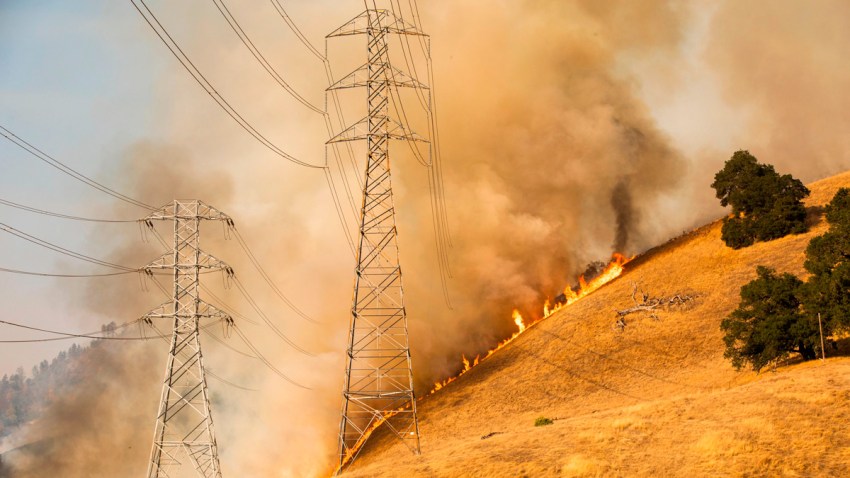 3 Rescued From Ledge at Fort Funston in San Francisco

A 2017 study published by the online medical journal BMJ Open found that 3 percent of people hit by rubber bullets died from their injuries and 15 percent were permanently injured.

During the protests that broke out in late May and early June in San Jose following the death of George Floyd in Minneapolis police custody, a local musician hit by a rubber bullet was left with a black eye and blurry vision.

Many others suffered bruises from the bullets as police fired hundreds of rounds of projectile impact weapons into crowds of protesters.

JT Stukes, a 37-year-old San Jose resident, was hit in the back, hip, leg and helmet when trying to get out of the police's way during a protest in front of City Hall on May 31. According to a lawsuit filed on his behalf, he was chatting with police officers before they started firing at protesters out past the curfew.

"I don't believe that as a council we should allow for situations that we know are highly likely to cause serious injury or even death to our residents when we see what the evidence is around the country," Liccardo said.

Liccardo was the lone dissenting vote on the issue. Other councilmembers and police acknowledged the dangers of projectile impact weapons but cited concerns on how police would defend themselves if attacked.

"As we remove some of the tools, especially those less-than-lethal tools, then we limit officers on the options that they have, and then you do put officers in situations where you're asking them to simply strike someone with a baton or ultimately, in certain circumstances, use their firearm," Councilmember Raul Peralez said. "I don't think that's the type of limit we should put on our officers."

With the new vote, the police duty manual was updated so that projectiles "only be used in situations where a person is actively attacking an officer or another person or when an armed agitator poses a threat to officers or other peaceful protesters."

The amended duty manual outlined that officers who violate the rules will face internal investigation and potential punishment.

"[These changes] make projectile weapons better tools, allow our officers to use them better and protect our citizenry as we utilize them," said Peralez, a former San Jose police officer.

Assistant Police Chief Dave Knopf echoed that sentiment and believed police effectively responded to the concerns of protesters and residents with the new ban of rubber bullets as a means of crowd control. "I'm not exactly sure what else you want us to do," Knopf said to the council.

"I'm not going to commit the office in this department to stand on a line and not defend themselves in a riotous situation."

However, throughout the meeting, tensions rose as councilmembers directed heated lines of questioning to the assistant chief.

The debate came after the release earlier this week of body camera footage and a report of how San Jose police responded to the George Floyd protests.

Councilmember Pam Foley said though she was not there, after watching the compilation of videos, she was not pleased with the police response.

"They were protests in my eyes and not riots," Foley said. "Watching the videos [in San Jose] and … in other cities and how police departments were handing it. It made me so sad. It made me angry and it made me anxious for the safety of all involved."

However, the Police Department insisted that the total ban of rubber bullets would leave police officers vulnerable. They also rebutted notions that police used excessive force, arguing that their use of rubber bullets was necessary because they were responding to "continuous violent confrontations with officers, rampant destruction of property, arson, and looting," Knopf said.

Capt. Jason Dwyer said the only other realistic options for crowd control would be the use of chemical agents like tear gas and batons.

"Ultimately, if other tools are ineffective, we should not take away the opportunity of this tool that we know is much less impactful and less lethal than a handgun," Peralez said.

Liccardo fervently disagreed but he and the council came to a consensus with other police duty manual changes, including a minimum age in which minors can be placed into handcuffs, increasing diversity in the police hiring process and prohibiting the hiring of people with tattoos that are racist or align with hate groups.

The changes barred "no knock entries" where a warrant is required unless there is a risk of evidence being destroyed or loss of life if officers knock.

The council also added text to the duty manual that bans officers from covering their badges and requires officers to provide badge numbers upon requests; both practices that were already policy for San Jose police.