US Bans Russian Oil Imports as Biden Warns of ‘Costs'

Biden acknowledged it will bring costs to Americans, particularly at the gas pump

Striking harder at Russia’s economy, President Joe Biden on Tuesday ordered a ban on Russian oil imports in retaliation for Vladimir Putin’s onslaught in Ukraine. The major trade action, responding to the pleas of Ukraine’s embattled leader, thrust the U.S. out front as Western nations seek to halt Putin’s invasion.

Americans will feel pain, too — at the gas pump — Biden acknowledged, declaring, “Defending freedom is going to cost.”

The imports have been a glaring omission in the massive sanctions put in place on Russia over the invasion. Energy exports have kept a steady stream of cash flowing to Russia despite otherwise severe restrictions on its financial sector.

“We will not be part of subsidizing Putin’s war,” Biden said, calling the new action a “powerful blow” against Russia's ability to fund the ongoing offensive.

Biden said the U.S. was acting in close consultation with European allies, who are more dependent on Russian energy supplies and who he acknowledged may not be able to join in immediately. The announcement marked the latest Biden attempt at cutting off Russia from much of the global economy and ensuring that the Ukraine invasion is a strategic loss for Putin, even if he manages to seize territory.

“Ukraine will never be a victory for Putin,” Biden said.

Ukrainian President Volodymyr Zelenskyy in a tweet praised Biden's action: "Thankful for US and @POTUS personal leadership in striking in the heart of Putin’s war machine and banning oil, gas and coal from US market. Encourage other countries and leaders to follow.” 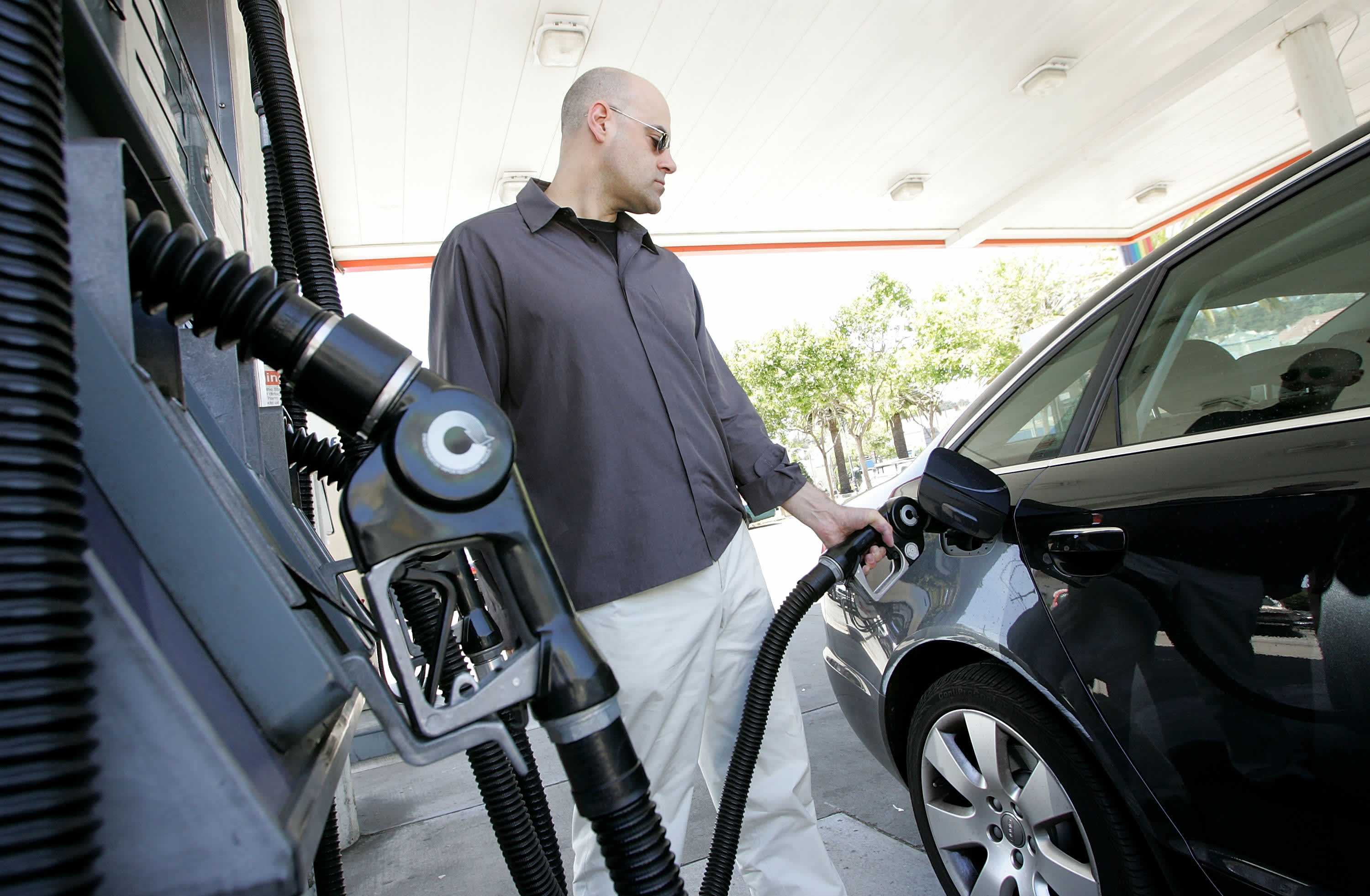 How to Find the Cheapest Gas Near You 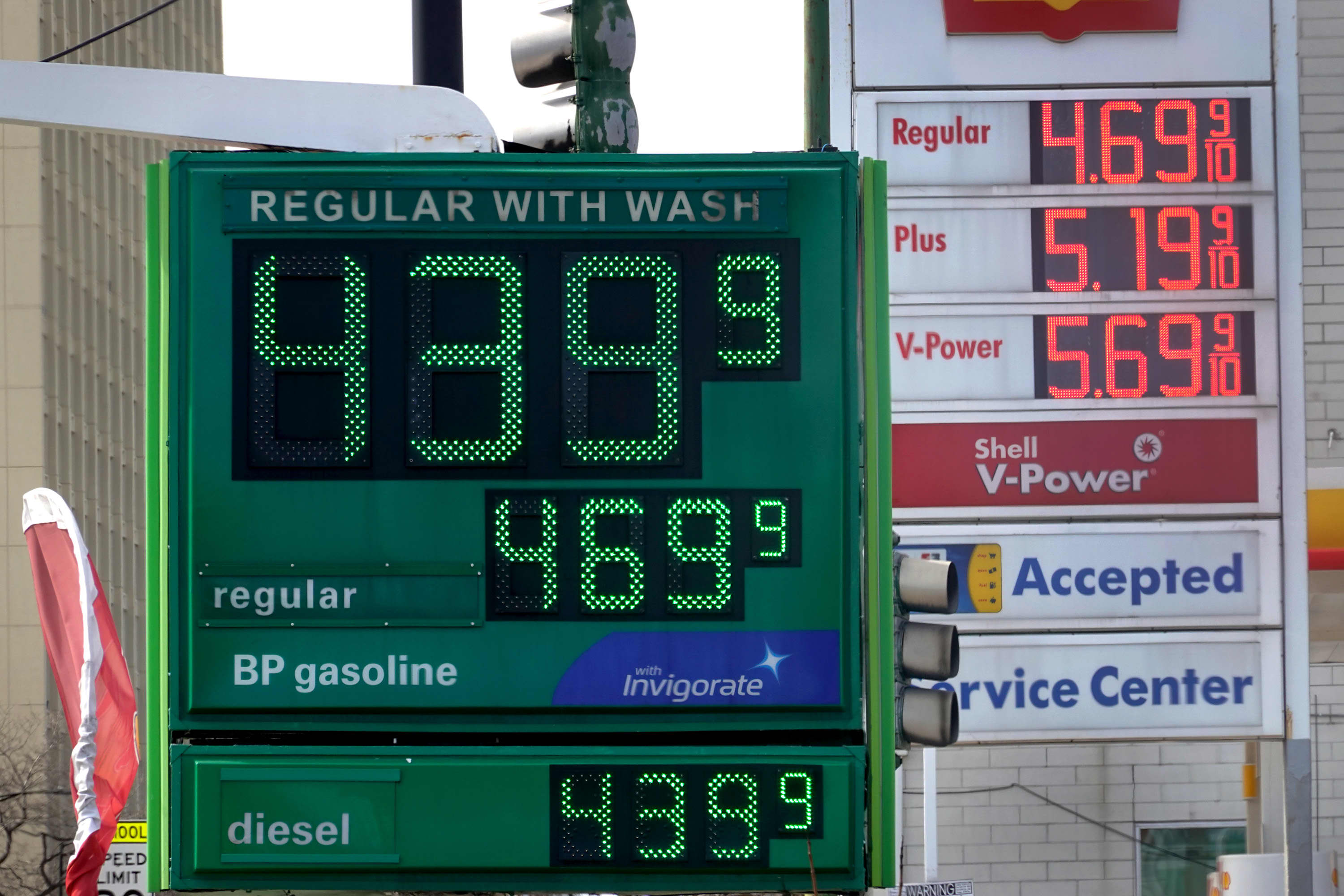 National Average for a Gallon of Gas Tops $4, the Highest Price at the Pump Since 2008

The European Union this week will commit to phasing out its reliance on Russia for energy needs as soon as possible, but filling the void without crippling EU economies will likely take some time. The U.K., which is no longer part of the EU, announced Tuesday that oil and oil products from Russia will be phased out by the end of the year.

Unlike the U.S., which is a major oil and gas producer, Europe relies on imports for 90% of its gas and 97% of its oil products. Russia supplies 40% of Europe’s gas and a quarter of its oil. The U.S. does not import Russian natural gas.

The issue of oil sanctions has created a conflict for the president between political interests at home and efforts to impose costs on Russia. Though Russian oil makes up only a small part of U.S. imports, Biden has said he was reluctant to ban it, cutting into supplies here and pushing gasoline prices higher.

Inflation is at a 40-year peak, fueled in large part by gas prices, and that could hurt Biden heading into the November midterm elections.

“Putin’s war is already hurting American families at the gas pump,” Biden said, adding, “I’m going to do everything I can to minimize Putin’s price hike here at home.”

Gas prices have been rising for weeks due to the conflict and in anticipation of potential sanctions on the Russian energy sector. The average price for a gallon of gasoline in the U.S. hit a record $4.17 Tuesday, rising by 10 cents in one day, and up 55 cents since last week, according to auto club AAA.

Biden said it was understandable that prices were rising, but cautioned the U.S. energy industry against “excessive price increases” and exploiting consumers.

Even before the U.S. ban many Western energy companies including ExxonMobil and BP moved to cut ties with the Russia and limit imports. Shell, which purchased a shipment of Russian oil this weekend, apologized for the move on Tuesday amid international criticism and pledged to halt further purchases of Russian energy supplies. Preliminary data from the U.S. Energy Department shows imports of Russian crude dropped to zero in the last week in February.

In 2021, the U.S. imported roughly 245 million barrels of crude oil and petroleum products from Russia — a one-year increase of 24%, according to the U.S. Energy Information Administration.

“It’s an important step to show Russia that energy is on the table,” said Max Bergmann, a former State Department official who is now a senior fellow at the Democratic-leaning Center for American Progress.

Bergmann said it wasn’t surprising that the U.S. was able to take this step before European nations, which are more dependent on Russian energy.

“All of this is being done in coordination, even if the steps are not symmetrical,” he said. “We are talking to them constantly.”

The White House said the ban on new purchases was effective immediately but the administration was allowing a 45-day “wind down” for continued delivery under existing contracts.

The news of Biden's decision Tuesday was first reported by Bloomberg.

"Fossil fuels make us all vulnerable...to these geopolitical crises and shocks," says Selwin Hart, the Special Adviser to the U.N. Secretary-General focusing on climate. With the Russian invasion of Ukraine causing a stir in the energy market, it's time to transition more rapidly into renewable energy, Hart says. He talked more about the world's energy future and the U.N. IPCC report on climate change, which warns of worsening natural disasters caused by emissions.

The White House announcement comes amid bipartisan pressure on Capitol Hill to ban Russian energy and impose other economic costs.

On Monday, Democrats on the powerful Ways & Means Committee posted, then removed, an announcement on a bipartisan bill to ban Russian oil imports and slap further trade sanctions on the country, according to an aide, because of pushback from the White House against acting before Biden had made his decision.

“President Biden is finally doing what members of Congress have been pushing for all along,” Sen John Barrasso, R-Wyo., and a member of party leadership, said Tuesday. “His decision to ban Russian oil is a much-needed step to kill Putin’s cash cow."

Said Jason Furman, a Harvard professor and former economic adviser to President Barack Obama: “The United States economy can fully handle any of the challenges associated with higher oil prices. But it will bring some challenges. We’re going to have higher prices at the pump, and there’s no way around that.”

Pelosi said the House would go forward with a vote Tuesday on legislation to ban the Russian oil imports, impose trade costs on Russia and expand sanctions authority against Russians for attacks on civilians in Ukraine.

But late Tuesday, the House pushed back a vote on the bill amid disagreements among lawmakers over details. The House was expected to vote on the bill Wednesday, according to an aide granted anonymity to discuss the situation.

Before the invasion, Russian oil and gas made up more than a third of government revenues. Global energy prices have surged after the invasion and have continued to rise despite coordinated releases of strategic reserves, making Russian exports even more lucrative.

As a consequence of Russia's invasion of Ukraine, the U.S. and international partners have sanctioned Russia’s largest banks, its central bank and finance ministry, and moved to block certain financial institutions from the SWIFT messaging system for international payments.

But the rules issued by the Treasury Department allow Russian energy transactions to keep going through non-sanctioned banks that are not based in the U.S. in an effort to minimize any disruptions to the global energy markets.

German Chancellor Olaf Scholz has said he opposes a European ban on Russian energy imports and that there’s no other way to meet the European Union’s needs for motor fuel, heat and electricity, and industrial use. Vice Chancellor Robert Habeck said Tuesday that when he visited Washington last week, U.S. officials acknowledged Europe was in a different situation.

“They told me in the talks that they will neither demand nor ask that Germany do the same. But I would extrapolate from that for us, and for me, that we need as soon as possible to create the possibility to take similar measures.”

While Russian oil makes up a small amount of overall U.S. energy imports, the U.S. could replace Russian crude with imports from other oil-rich nations, but that could prove politically problematic.

Key U.S. senators are warning the Biden administration from seeking any oil import deal from the Nicolas Maduro regime in Venezuela.

“The Biden administration’s efforts to unify the entire world against a murderous tyrant in Moscow should not be undercut by propping up a dictator under investigation for crimes against humanity in Caracas,” said Sen. Bob Menendez, D-N.J., the chairman of the Foreign Relations Committee, in a statement late Monday. “The democratic aspirations of the Venezuelan people, much like the resolve and courage of the people of Ukraine, are worth much more than a few thousand barrels of oil.”