Firefighters trying to contain the massive wildfires in Oregon, California and Washington state say they are constantly on the verge of exhaustion

They work 50 hours at a stretch and sleep on gymnasium floors. Exploding trees shower them with embers. They lose track of time when the sun is blotted out by smoke, and they sometimes have to run for their lives from advancing flames.

Firefighters trying to contain the massive wildfires in Oregon, California and Washington state are constantly on the verge of exhaustion as they try to save suburban houses, including some in their own neighborhoods. Each home or barn lost is a mental blow for teams trained to protect lives and property.

And their own safety is never assured. Oregon firefighter Steve McAdoo’s shift on Sept. 7 seemed mostly normal, until late evening, when the team went to a fire along a highway south of Portland. 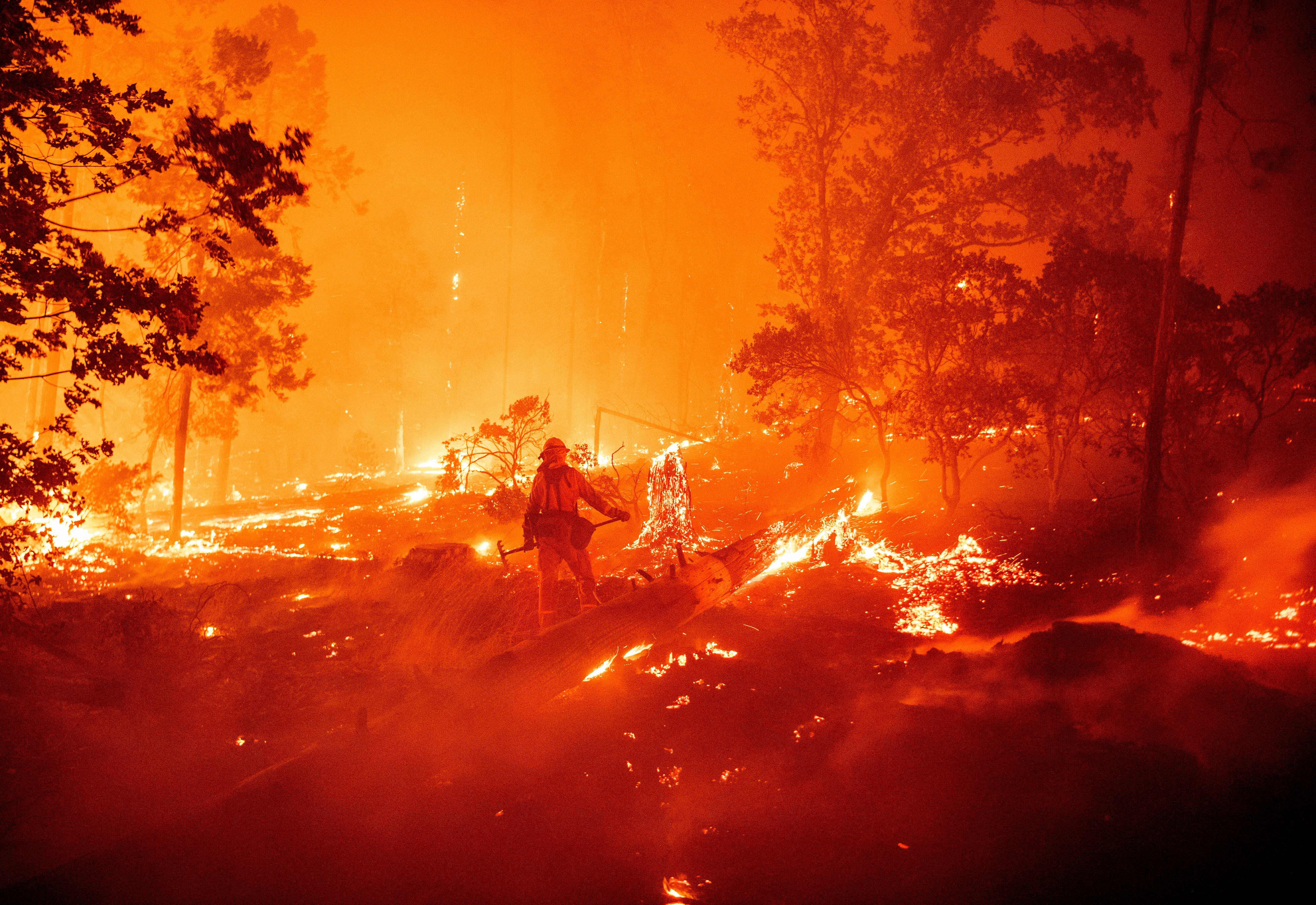 Lightning Storm, Easterly Wind: How the Wildfires Got So Bad

That happened again and again as he and the rest of the crew worked shifts that lasted two full days with little rest or food. They toiled in an alien environment where the sky turns lurid colors, ash falls like rain and towering trees explode into flames, sending a cascade of embers to the forest floor.

“The sky was just orange or black, and so we weren’t sure if was morning or night,” he said. “My crew and I said that to each other many times, ‘What is going on? When is this going to end?’”

As he worked, McAdoo worried about his wife and daughter, who had to evacuate the family’s home. Often all he could do was send painfully short text messages: “Unless they were running from fire, all I could say was ‘I’m busy,’” he said.

His family is safe, and his house is still standing, but he has not been able to check on it yet. Never before have flames crept so close to his Portland-area home.

Many firefighters are trying to protect the communities where they live. In California, Jesse Barnes had spent a full day working on another fire when he was called to a fast-moving blaze near his home county, close to Berry Creek, on the night of Sept. 9. An evacuation warning went out hours before, but some homes do not have cellphone service, and a few homes have no phones at all, he said. Some residents were reluctant to leave at first.

The crews saw people trying to escape the flames along the side of the road or in smoke-filled cars making panicked bids to outrun the blaze responsible for more than a dozen deaths so far.

The Dodson family's home outside of Estacada, Oregon was completely destroyed by the Riverside fire.

Some had burns. Everyone was covered in ash. “They were terrified,” Barnes said.

The firefighters tried to protect homes where they could, but the winds were so strong they could do little to stop the inferno as it spewed embers up to 10 miles away.

Instead, they worked to make sure people could get out, clearing trees off the roads, sometimes just feet from the flames. Barnes said it felt like being in the stinging, acrid path of campfire smoke — for two days straight.

The speed of the winds and the dryness of the forest made this fire one of the worst he’s seen. “There was no stopping it,” he said.

“We’re tired and covered in ash and soot all blowing in our faces, coughing from the smoke,” he said. But with so many wildfires burning, there was no one to take their places. “Once you’re there, there’s no relief,” he said.

Western states usually turn to each other for help, but that's been hard with the number of places under siege in this historic wildfire season, which has killed more than 30 people and destroyed thousands of structures in three states.

One of the few places initially able to send help was Utah. Firefighters from communities in the Salt Lake area went to southern Oregon to battle fires that have destroyed entire towns. They've been trying to keep forested communities from going up in smoke.

"If you are exposed for 12 hours of smoke in the air, then that is like 12 hours of continued smoking,” says Dr. Zab Mosenifar, a critical care pulmonologist at Cedars Sinai Medical Center.

The teams are working 12-hour shifts, ending in the early morning hours to get a few hours of rest. They sleep on school gym floors or under the stars. At fire camps, they also must take precautions against the coronavirus, wearing face coverings, drinking water only from bottles and staying with their own small groups rather than mixing with others.

As they pulled into to the town of Butte Falls over the weekend, the sky filled with an eerie light, and ash started to fall — danger signs that the blaze could be getting closer, said firefighter Matthew McFarland, a spokesman with Unified Fire Authority.

The fire did not get any closer that night, but as the week wore on, they worked to build fire lines, trying to draw the blaze away from town, sometimes with the help of local loggers.

“An active wildfire is almost impossible to attack head-on,” McFarland said. Instead, they use bulldozers to dig trenches it can’t jump or burn the wood and brush it needs for fuel.

The Pacific Northwest is new territory for many Utah firefighters, who typically battle wildfires fed by smaller trees in the mountains of that desert state. The giant trees of Oregon tend to burn hotter, drying out the forest nearby and further feeding the blaze.

Still, the basic tactics are the same. Firefighters cleared out brush, cut fire lines and laid out hoses near the school in Butte Falls so crews can grab them quickly if the blaze roars into town.