GOP Splits as Virus Aid Package Could Swell Past $1 Trillion

“Regretfully, this is not over,” McConnell said after a raucous private GOP lunch

The price tag for the next COVID-19 aid package could quickly swell above $1 trillion as White House officials negotiate with Congress over money to reopen schools, prop up small businesses, boost virus testing and keep cash flowing to Americans while the virus crisisdeepens in the U.S.

Senate Majority Leader Mitch McConnell on Tuesday promised a new round of direct payments to earners below a certain income level, similar to the $1,200 checks sent in the spring. President Donald Trump insists on a payroll tax holiday for workers. And Democrats want billions to outfit schools and shore up local governments.

“Regretfully, this is not over,” McConnell said after a raucous private GOP lunch, urging Americans to learn to live with the new virus by wearing masks and practicing social distancing until a vaccine can be found.

Supporters of the package “should be ashamed of themselves," Sen. Rand Paul of Kentucky said as he emerged.

President Donald Trump said Tuesday the coronavirus pandemic will "get worse before it gets better." He also urged Americans to wear masks whenever social distancing is not possible.

Paul compared GOP backers of the spending to “Bernie bros” — referring to the young supporters of Sen. Bernie Sanders of Vermont. “This is insane. ... There's no difference now between the two parties.”

As a long line of senators rose to speak about aspects of the bill, Texas Sen. Ted Cruz asked his colleagues, “What in the hell are we doing?”

Cruz warned if the economy is still shut down come November, Joe Biden will win the White House, Democrats will control the Senate and "we’ll be meeting in a much smaller lunch room,” according to a person granted anonymity to discuss the closed-door session.

With the pandemic showing no signs of easing,officials acknowledge the daunting challenge of trying to contain the coronavirus and prevent further economic distress. The U.S. has rising infections and a death toll nearing 142,000, more than anywhere else in the world. The health crisis is worsening just as emergency aid is about to expire.

Meadows told reporters the president wants to ensure the funding package “meets the legitimate needs that are before the American people.”

Democratic leaders said the Republicans are in disarray, and Pelosi later blamed the pandemic's mounting toll on the president's inaction. 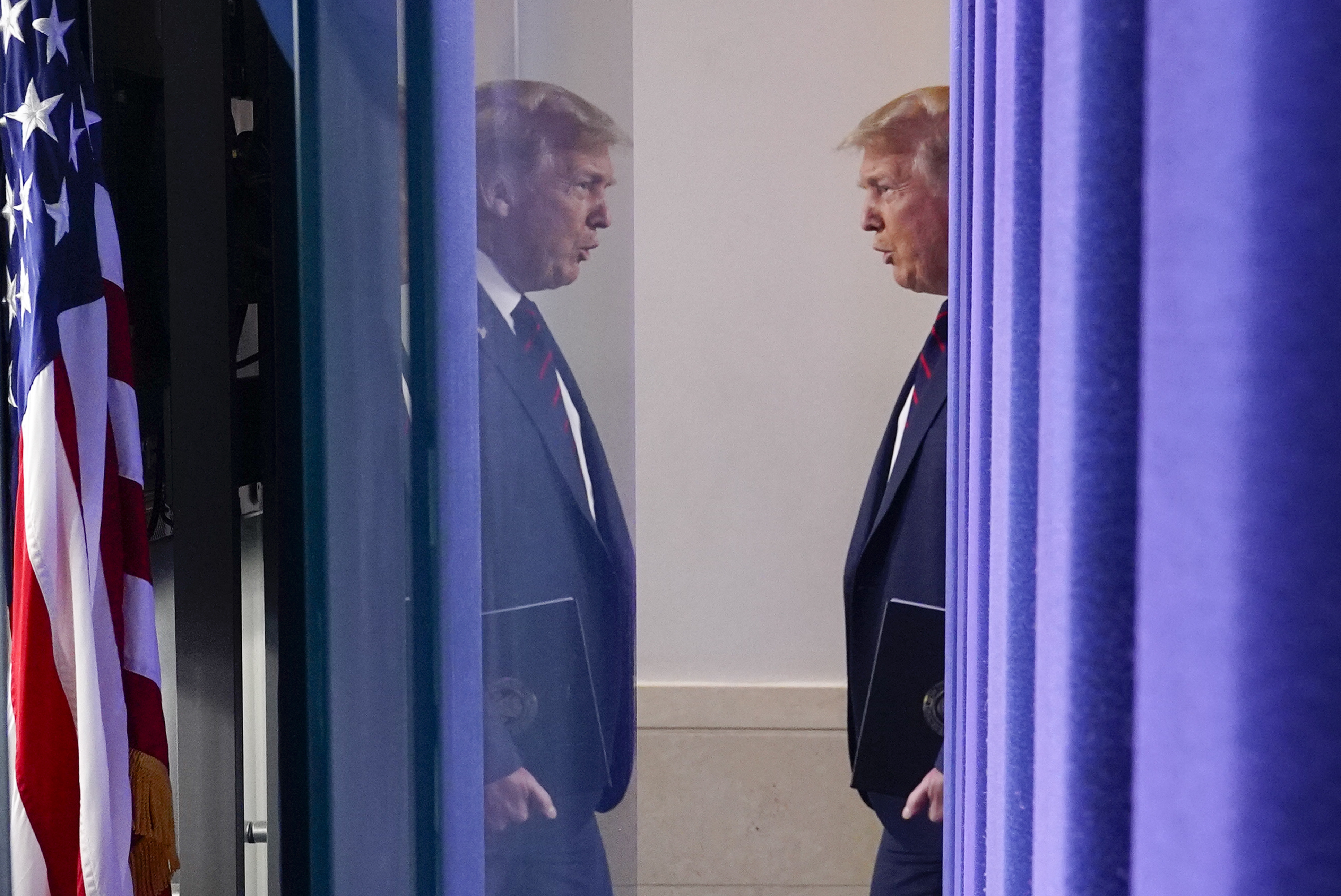 “It is the Trump virus,” she said on CNN.

The Republicans are poised to roll out a $1 trillion package, what McConnell called a “starting point” in talks. It's a counter-offer to Pelosi's $3 trillion House-passed plan as they race to strike a deal by the end of the month. That's when a $600 weekly unemployment benefits boostand other aid, including a federal rental moratorium on millions of apartment units, expires.

McConnell's package would send a fresh round of direct cash payments to Americans below a certain income level, likely $75,000 for singles, extend small business loans under the Paycheck Protection Program and create a five-year liability shieldagainst what he warns is a potential “epidemic” of coronavirus lawsuits.

It's also expected to include at least $105 billion for education, with $70 billion to help K-12 schools reopen, $30 billion for colleges and $5 billion for governors to allocate. The Trump administration wanted school money linked to reopenings, but in McConnell's package the money for K-12 would be split 50-50 between those that have in-person learning and those that do not.

Republicans want to replace the $600 weekly federal jobless benefit with a lower amount, to prevent the unemployed from receiving more aid than they would through a normal paycheck, Republicans said.

Over lunch, Mnuchin explained the unemployment boost could be phased down to a percentage of a worker's previous income, according to a Republican granted anonymity to discuss the private meeting. Some Republicans prefer simply eliminating the $600 benefit.

But the president’s priorities are splitting his GOP allies and giving momentum to Democrats.

Trump wants a full repeal of the 15.3% payroll tax, which is shared among employers and employees, and funds Social Security and Medicare. Experts say that alone would cost $600 billion. At a White House meeting on Monday, GOP leaders told Trump they preferred to include only a partial payroll tax cut.

Easing the payroll tax is dividing Trump’s party because it does little to help out-of-work Americans and adds to the debt load. The tax is already being deferred for employers under the previous virus relief package. Supporters say cutting it now for employees would put money in people’s pockets and stimulate the economy.

White House press secretary Kayleigh McEnany said Tuesday the administration wants “targeted” funds for the next round of aid, rather than adding more to the existing pot. She said no one is holding it up.

Senate Democrats began investigating why the Trump administration has left almost half the testing money unspent.

Country Time Lemonade has created the ‘Littlest Bailout Relief Fund’ to help support kids who are unable to run summer lemonade stands during the pandemic.

The political stakes are high for both parties before the November election, and even more so for the nation, as amid the virus crisis and economic fallout.

Biden, the Democrats’ presumed presidential nominee, stated his own priorities, urging “a lifeline to those who need it most: working families and small businesses.”

Trump's renewed focus on therapeutics and a vaccine is falling flat among lawmakers who understand that any COVID-19 cures remain months, if not a year, from widespread distribution in the U.S. The federal government is still struggling to provide basic medical supplies and personal protective equipment to health care providers.

Mnuchin vowed to stay on Capitol Hill for the next two weeks, determined to reach a deal by month's end.

The proposed virus aid package would be the fifth, following the $2.2 trillion bill passed in March, the largest U.S. intervention of its kind. The jobless rate has remained in double digits, higher than in the last decade’s Great Recession, and a federal eviction moratorium on millions of rental units approved in the last bill is about to expire.