Kobe Bryant's Legacy Continues on One Year After His Tragic Death

One year after a tragic helicopter crash took the lives of Kobe Bryant, his daughter, Gianna, and seven other people on board, we reflect back on the year that was and the legacy he leaves behind

If you close your eyes and open your heart, you'll hear it fill your ears.

It's a familiar sound. One you've probably heard hundreds of times inside the confines of Staples Center over the course of the last 20 years.

It's an unmistakable sound that only a chorus of 20,000 people can combine to make. Close your eyes, open your heart, and listen. Do you hear it? Let it slowly rise and reach its crescendo.

I remember the last time I heard it.

The day — Feb. 24, 2020 — was a symbolic day combining both Gianna and Kobe Bryant's jersey numbers with the 20 years he played for the Lakers. Showered in purple, and with spotlights shining on his two gold jerseys hanging in the rafters, thousands gathered inside and out on the corner of Chick Hearn Court and Figueroa Street for a celebration of life.

Surrounded by 33,643 red roses—one for each and every point he scored in his 20-year NBA career—athletes, musicians, actors, and adoring fans all gathered together.

Every major television network around the world carried the event live, and millions across the globe watched with tears in their eyes.

One year after a tragic helicopter crash took the lives of Bryant, his daughter, Gianna, and seven other people on board, we reflect back on the year that was, and the legacy he leaves behind.

Everyone remembers where they were on Jan. 26, 2020 when they heard the news. Whether you received a phone call, got an alert on your phone, or saw it on the television, the words hit like a punch to the gut. 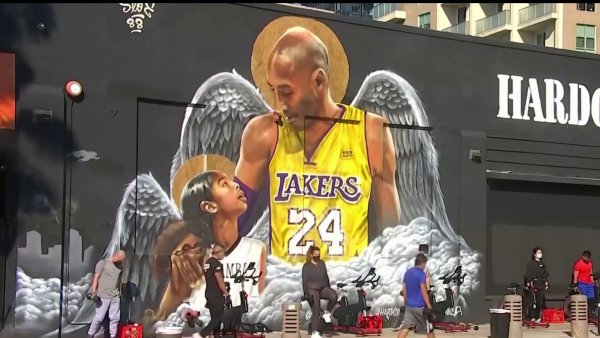 Kobe Bryant is Immortalized in These Murals Around the World 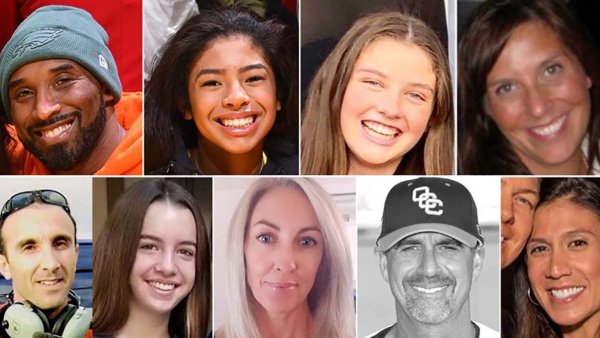 Nobody wanted it to be true. Hoping upon hope that the headlines were wrong, that the reports were a mistake, or that social media was once again circulating another fake death rumor.

But in the hours after the accident, as fans across the Southland flocked to the crash site, walking miles just to catch a glimpse, reality finally began to set in. With that reality, came the heartbreaking news that 13-year-old Gianna Bryant was also on board, as were seven others.

"God knew they couldn't be on this earth without each other," said a tearful Vanessa Bryant during the celebration of life ceremony at Staples Center. "He had to bring them home together."

In the days that followed the tragedy, Staples Center and L.A. Live transformed into a makeshift memorial. Mourners from across the country gathered to leave flowers, cards, jerseys, basketballs, and personal messages.

But Bryant's death was not just felt in Los Angeles. Around the world, tributes appeared in the form of murals and memorials. From China to India to Italy to the Philippines. It didn't matter that Kobe only played for the Lakers, he was a global icon, and the world grieved accordingly.

"I knew he was known and popular, but I didn't know how impactful he was worldwide," said current Lakers' forward Anthony Davis reflecting back on that day one year later. "He inspired so many people, and that's why so many people feel the pain the basketball community felt last year. As we approach his one-year anniversary, it saddens our hearts to actually come to the realization that he's gone."

Kobe Bryant may be physically gone, but his impact on the world lives on. His aura, larger than life when he walked the earth, is now immortal. Bryant has manifested the truth of Babe Ruth's famous idiom, "Heroes get remembered, but legends never die."

His legacy lives on in the Lakers, the franchise he spent 20 years shaping into his own. In the wake of his death, the Lakers painted the numbers 8 and 24 on the court. The team wore their "Black Mamba" designed jerseys with a special "KB" patch to honor him throughout the season.

During the Western Conference Finals, Davis shouted "Kobe!" after he drained a three-pointer at the buzzer to down the Denver Nuggets. A few weeks later, LeBron James honored Kobe in the best way possible: by winning a championship.

"There's a saying that goes: 'Time heals all,'" said James, reflecting back on the one-year anniversary of Bryant's death. "As devastating as it all was and is, it all takes time. Everyone individually is different and everyone grieves differently. We do whatever we can to live his legacy on. There's a lot of things that die in this world, but legends never die, and he's exactly that."

The Lakers continue his legacy on to this very day. Back on the floor at Staples Center — albeit, without fans still — they break each and every huddle with "Mamba on three!" And on their championship rings, reminders of Bryant's memory and legacy are everywhere.

But Bryant's legacy goes beyond the basketball court. He retired from the sport at the age of 37, and even though his second chapter of life was just beginning, it was nonetheless still impactful.

In the few short years that followed his illustrious basketball career, Bryant became somewhat of a secular saint by traveling the globe sharing his gifts with the world. In the next chapter of his life, Bryant became a filmmaker and won an Oscar. He became a storyteller and published a plethora of books. He became a philanthropist and established the Mamba and Mambacita Sports Foundation. But most of all, he became the greatest "Girl Dad" to four beautiful daughters, even coaching Gianna's youth basketball team. In fact, on the day he died, he was traveling to a basketball tournament to coach Gianna and her teammates.

"Kobe gave every last ounce of himself to whatever he was doing," said Michael Jordan last February. "After basketball, he showed his creative side. In retirement, he seemed so happy. He found new passions and continued to give back as a coach to his daughters. More importantly, he was an amazing dad and an amazing husband. He loved his daughters with all his heart."

In writing this article, I went back and watched the entirety of that celebration of life ceremony. I was fortunate enough to be there in person, but had never watched it on television until recently.

Over the course of his 41 years of life, Kobe made many friends, vanquished many foes, and didn't care who he offended along the way. Yet in his death, he brought each and every one of them back together inside the very venue where his most difficult obstacles and illustrious accomplishments occurred. He united us all inside Staples Center to share our memories, to try and heal our grief, and to live his life again.

For a little over a decade, Bryant was arguably the greatest basketball player on the planet. From 2000 to 2010, he won five championships, two Finals MVPs, and one NBA Most Valuable Player Award. Bryant's unbelievable basketball story was already legendary in and of itself, but it took everyone gathered together in the wake of his death to finally tell the whole story.

It's no secret that Kobe loved storytelling. It's what he was passionate about. So to hear his friends, family, mentors, and teammates retell his story only made me realize that Bryant remained very much a human being throughout it all.

"You were taken away from us way too soon," said Shaquille O'Neal, who was Bryant's teammate for three of his five championships. "Your next chapter in life was just beginning. But now it's time for us to continue your legacy. It's now time to raise from the anguish and begin with the healing."

As we reflect back on Kobe Bryant's legacy on the one-year anniversary of his death, it is not one that can be carried on with just championships or jewelry. No, it's a legacy that must live on through us, and through storytelling.

Bryant once said that it's the journey that's the dream, not the destination. Therefore, it is by heeding that message along the pathway of our own journey that we carry on his legacy.

One Year Later: How the World Paid Tribute to Kobe Bryant

Bryant's legacy will live on each and every time we crumple up a piece of paper and throw it toward the trashcan and shout, "Kobe!"

Bryant's legacy will live on if we attack each and every day with the same mamba mentality that he did.

But most importantly, Bryant's legacy will live on by supporting his young daughters as they grow up embodying that very legacy in their daily lives.

So the next time we can all gather safely again, when the sellout crowd rises to their feet to celebrate another Lakers victory. I want you to close your eyes, open your heart, and carry on Kobe's legacy by filling Staples Center with a vociferous chant that is long overdue.