Faced with growing pressure to crack down on an “occupied” protest zone following two weekend shootings, Seattle’s mayor said Monday that officials will move to wind down the blocks-long span of city streets taken over two weeks ago that President Donald Trump asserted is run by “anarchists."

Mayor Jenny Durkan said the violence was distracting from changes sought by thousands of peaceful protesters opposing racial inequity and police brutality. She said at a news conference that the city is working with the community to bring the “Capitol Hill Occupied Protest” zone, or CHOP, to an end and that police soon would move back into a precinct building they had largely abandoned in the area.

Durkan also vowed to address some of the protesters' demands, including investing more in Black communities, reimagining policing in cooperation with community leaders, and pushing for accountability measures and statewide reform of police unions.

The mayor did not give an immediate timeline for clearing out the occupation but said “additional steps” would be examined if people don't leave voluntarily. With scores of people camping in a park in the protest zone, Durkan said peaceful demonstrations could continue, but nighttime disorder had to stop.

“The cumulative impacts of the gatherings and protests and the nighttime atmosphere and violence has led to increasingly difficult circumstances for our businesses and residents,” Durkan said. “The impacts have increased and the safety has decreased.”

Across the country Friday, people gathered in observance of Juneteenth, a day that celebrates the end of slavery in the U.S.

A shooting Sunday night was the second in less than 48 hours at the edge of the zone, which is named for the Capitol Hill neighborhood near downtown Seattle and emerged during nationwide protests over the killing of George Floyd at the hands of Minneapolis police.

The 17-year-old victim was shot in the arm and declined to speak with detectives, police said. Gunfire early Saturday left a 19-year-old man dead and another person critically wounded.

The victims were taken to a hospital by volunteer medics in private cars, and police said they were met by a hostile crowd that prevented them from immediately getting to the scene.

It was not apparent if the shootings had anything to do with the protest — gunfire sometimes occurs in the neighborhood, especially on warm summer nights.

Protesters cordoned off the several-block area near the police's East Precinct after Seattle riot squads unleashed tear gas, pepper spray and flash-bangs on large crowds of mostly peaceful protesters, drawing condemnation from many city leaders and a federal court order temporarily banning the use of the weapons on demonstrators.

After police largely abandoned the building, protesters took over the area — with demonstrators painting a large “Black Lives Matter” mural on the street, handing out free food, playing music and planting a community garden. Its existence incensed Trump, who criticized Durkan and Washington Gov. Jay Inslee, both Democrats.

Peace has prevailed during the day. On Monday, people lounged on the turf at a park, while volunteers handed out food, water and toiletries. Artists painted designs on wooden barricades, and a few candles burned in front of a sign on the police building listing people killed by officers.

At night, however, the atmosphere has become more charged, with demonstrators marching and armed volunteer guards keeping watch.

“With not having a police presence here, people are free to do whatever they want to do," said Bobby Stills, a Seattle resident who has spent time volunteering at the protest zone. “You never know who’s going to show up. That’s why people here are on such high alert — they don’t know who’s who or what’s what or their intentions.”

Durkan, who has faced calls from protesters and even some City Council members to resign over her handling of the demonstrations, and Police Chief Carmen Best said they did not immediately have a timeline for returning officers to the East Precinct, which was established to better respond to emergency calls in the city's historically Black district. They said officers would return safely and in the near future. Best noted that some other crimes, including rape, arson and burglary, had been reported in or near the protest zone. 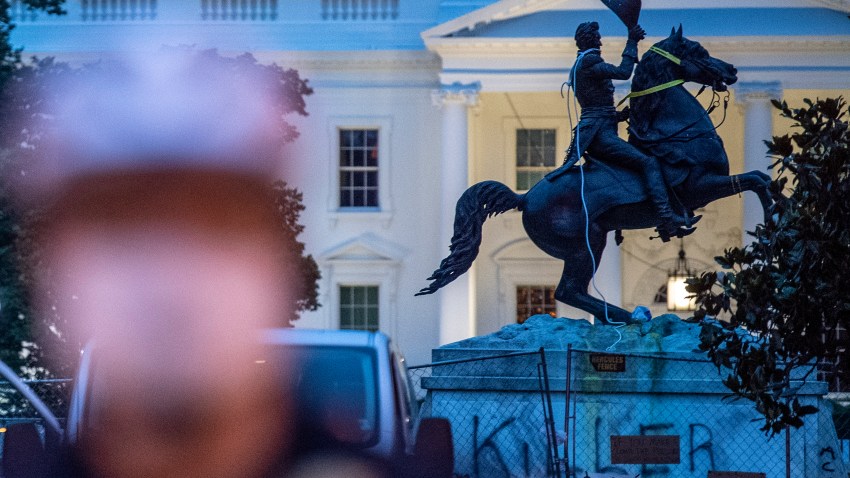 Demonstrators who had marched to the West Precinct police building downtown were returning to the zone when Sunday night's shooting occurred, police said.

Andre Taylor, who founded of the anti-police-shooting organization Not This Time! after his brother was killed by Seattle police in 2016, said Monday that he had warned protest organizers that the city would need to retake the area because of the violence.

“That CHOP area is attracting this kind of activity and it's unsafe,” Taylor said in a Facebook video. “I told them, 'All those people that were supporting you guys, they're going to start walking away from you, especially all those white people that were following you. ... They don't want to be associated with any part of that violence.”

Former U.S. Rep. Dave Reichert, a Republican who previously served as sheriff in the county where Seattle is located, also called on the city to take back control.

“Elected officials have abandoned the rule of law and their oath to protect and defend our communities,” he wrote in an opinion piece for Washington State Wire, a website devoted to state political news. “They have abandoned their law-abiding citizens and have been cowardly bullied into surrendering the East Precinct – and multiple city blocks.”

A statue depicting former President Theodore Roosevelt with a Native American man and an African man on either side of his horse is being moved in New York City.