Trump, Biden Scrap on Oil, Virus With Just Over a Week to Go

The surge of activity with just 11 days remaining in the 2020 contest highlighted the candidates' divergent strategies, styles and policy prescriptions

President Donald Trump and his allies fought for support in pivotal battleground states Friday after a debate performance that gave new hope to anxious Republicans. Democrat Joe Biden, campaigning close to home, tried to clean up a debate misstep while urging voters to stay focused on the president's inability to control the worsening pandemic.

The surge of activity with just 11 days remaining in the 2020 contest highlighted the candidates' divergent strategies, styles and policy prescriptions that are shaping the campaign's closing days. More than 52 million votes have already been cast, with an additional 100 million or so expected before a winner is declared.

The coronavirus pandemic has pushed Trump onto the defensive for much of the fall, but for the moment it is Biden's team that has been forced to explain itself. In the final minutes of Thursday night's debate, the former vice president said he supports a “transition” away from oil in the U.S. in favor of renewable energy. The campaign released a statement hours later declaring that he would phase out taxpayer subsidies for fossil fuel companies, not the industry altogether.

But Trump, campaigning in Florida, repeatedly seized on the issue.

President Donald Trump and Democratic presidential nominee Joe Biden squared off in their second debate on Thursday. It was the last scheduled debate before the Nov. 3 election.

"That could be one of the biggest mistakes made in presidential debate history," he gloated at a rally at The Villages, a sprawling retirement community in Florida, where thousands of people gathered outdoors on a polo field. Most did not wear masks.

Later, in Pensacola, Trump recounted the moment with glee.

“It looked like he made it, it looked like it was going to be OK. He got off the stage, going back to his basement, and then they hit him with the energy question. They hit him with a thing called oil," he told a sprawling crowd that appeared to be one of the largest of his campaign to date.

As part of his damage control, Biden dispatched running mate Kamala Harris to help clarify his position as she campaigned in swing state Georgia.

We’ve pulled out our Donald Trump and Joe Biden action figures to reenact the most talked about moment from the final presidential debate. In this exchange, Trump and Biden disagreed about how closely the president has compared himself to Abraham Lincoln.

“Let’s be really clear about this: Joe Biden is not going to ban fracking,” Harris said, referring to a technique that uses pressurized liquid to extract oil or natural gas. “He is going to deal with the oil subsidies. You know, the president likes to take everything out of context. But let’s be clear, what Joe was talking about was banning subsidies, but he will not ban fracking in America.”

As he campaigned in The Villages, Trump fired an insult at Harris that pointed to her gender, quickly stirring criticism.

As for Biden and oil, while ending the nation's reliance on fossil fuel is popular among many liberals, the idea could hurt him among working-class voters in swing states such as Pennsylvania, Ohio and Texas who depend on the industry, and fracking in particular, to make a living.

Trump's allies immediately began running new attack ads seizing on the Democrats' inconsistent answers on energy. And Trump played a video at his Pensacola rally that included past comments from Biden and Harris about fracking, which Harris supported banning during her primary campaign. 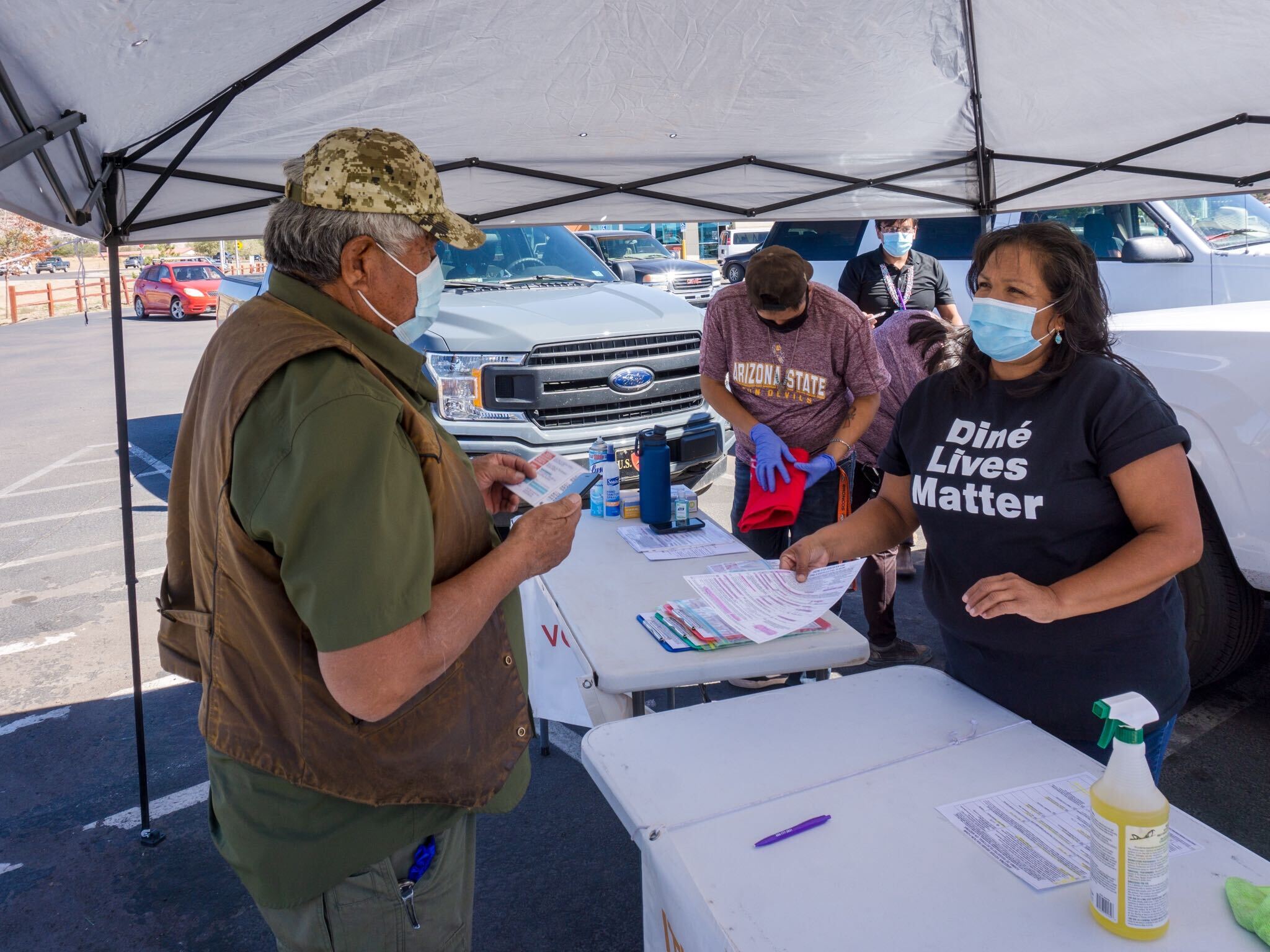 As part of his plan to fight climate change, Biden has said he would ban new gas and oil permits — including fracking — on federal lands only. The vast majority of oil and gas does not come from federal lands.

With 29 Electoral College votes, Florida is widely seen as a must-win state for Trump if he wants to win a second term in the White House. While polling here in early October showed Biden with a slight advantage, a more recent poll has the two candidates neck and neck.

Trump told rallygoers he planned to vote while in Florida on Saturday. “Eleven days from now, we are going to win my home state of Florida," he said.

Trump’s fate in the state is closely tied to his handling of the pandemic, especially among older voters, whose support for him has faded. He and his campaign have spent the last weeks trying to win them back, including Friday, when Trump pledged to protect Social Security and tried to paint Biden in hyperbolic terms.

A Biden election, Trump claimed at one point, “would mean that America’s seniors have no air conditioning during the summer, no heat during the winter and no electricity during peak hours.” Biden has not endorsed anything of the sort.

With 28.1 million votes already cast, nearly five times the number of people have voted so far in the 2020 election than at this time in 2016. NBCLX storyteller Chase Cain explains what this surge in early voting means for the presidential race.

The pandemic was a major focus of Thursday's debate and it was the sole focus of Biden's only public appearance Friday close to his home in Delaware, which is hardly a swing state.

During the debate, Trump rosily predicted that the pandemic, which is escalating in several states, will “go away." Biden countered that the nation was headed toward “a dark winter.” The former vice president reiterated that theme Friday in Wilmington as he outlined his plans.

Biden vowed to work with Congress to enact a new economic relief package for hard-pressed individuals, businesses and states by the end of January after seeking input from Republican and Democratic governors. He also promised to encourage state leaders to implement mask mandates. Should they refuse, Biden said he would lean on municipal leaders to require universal mask wearing in their communities.

Though U.S. cases are soaring and deaths are nearing 224,000, Trump insisted that Biden was being too pessimistic.

One person, one vote is the democratic ideal. So why is the American system of voting still based on the Electoral College? In this opinion piece from The New York Times, Jesse Wegman explains the myths that keep us clinging to this system of voting – and why it may be finally time to let them go.

“We’re not entering a dark winter,” he insisted. "We’re entering the final turn and approaching the light at the end of the tunnel. That’s how I look at it.”

In fact, infections, hospitalizations and deaths are on the rise across the United States.

Even in the closing days of the race, Biden has maintained a cautious campaign schedule, citing the pandemic, while Trump has been a much more aggressive traveler. And he said he would be campaigning nonstop until Election Day, with as many as five or six rallies in the race’s final day.