US Forest Service Firefighter Dies of Illness While Assigned to Dixie Fire: Officials

A spokesperson for the U.S. Forest Service told NBC Bay Area Saturday that the firefighter, an employee with the Lassen National Forest died from an illness

A U.S. Forest Service firefighter assigned to the Dixie Fire has died from an illness, officials said.

Marcus Pacheco, an assistant fire engine operator for Lassen National Forest with 30 years of experience, died on Thursday. He was assigned to the Dixie Fire burning north of the Caldor Fire, authorities said.

Edwin Zuniga with the California Department of Forestry and Fire Protection said he couldn’t provide other details on the death.

The Dixie Fire began in mid-July in the northern Sierra Nevada and is the second-largest wildfire in recorded state history. It has burned nearly 1,400 square miles (3,625 square kilometers) in five counties and three national parks and forests, according to Cal Fire.

Three firefighters have been injured battling the blaze, which was 56% contained after destroying nearly 1,300 homes and other buildings.

The fire was being fought by 3,800 firefighters from various agencies. Calmer winds and higher humidity in the past two days helped crews trying to surround the fire, which at its peak raged through more than 100,000 acres of timber in a single day, fire officials said. 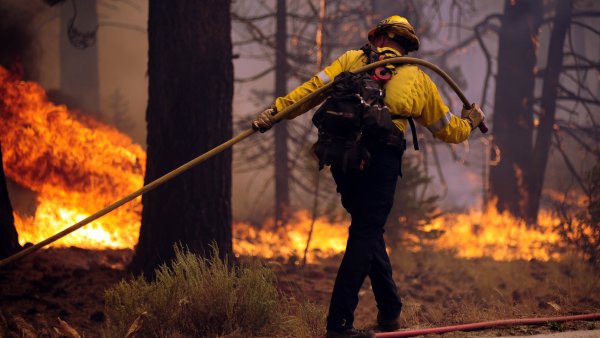 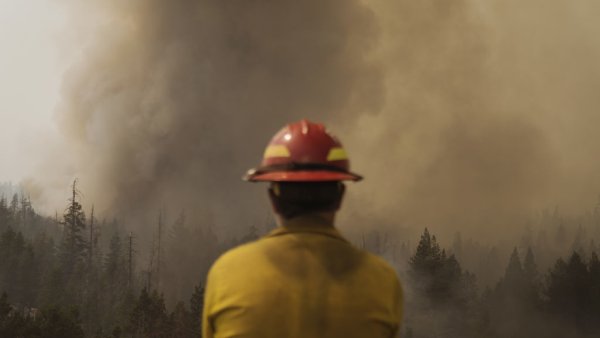 The blaze still was devouring 10,000 to 20,000 acres “which seems huge, except when you compare it to the size of the whole fire,” said Robert Jones, a fire information officer.

It was the first reported death among the more than 7,000 wildfires that have hit California this year in a season marked by drought and hot, dry weather that has turned timber, brush and grasslands into tinder throughout the U.S. West. California’s fires have burned over 3,000 square miles (nearly 8,000 square kilometers).

Fire concerns have shut down all national forests in the state.

South of the Dixie Fire, the Caldor Fire remained only a few miles from the popular resort of Lake Tahoe on the California-Nevada border. About 22,000 residents of South Lake Tahoe were ordered to evacuate last week.

Overnight, crews working on the eastern edge of the blaze were able to hold the fire within current containment lines and the immense blaze was now 43% contained, according to Cal Fire.

There was no immediate word on when residents might be allowed to return home but in a Sunday morning briefing, Tim Ernst, a fire operations section chief, said crews would continue to quench embers and mop up hot spots to make it safe to repopulate some communities around South Lake Tahoe “in the coming days.”

Mandatory evacuation orders on the Nevada side of the state line were lifted Saturday, but some areas remained on a warning status. Douglas County authorities urged residents to stay alert, saying the fire still has the potential to threaten homes.

The fire has injured five firefighters and civilians and burned more than 700 homes, Cal Fire reported. Nearly 28,000 homes, businesses and other buildings remained threatened, ranging from cabins to ski resorts.