Biden Signs Burst of Virus Orders, Vows ‘Help Is on the Way'

Biden also will address inequities in hard-hit minority communities as he signs 10 pandemic-related executive orders on Thursday, his second day in office

With a burst of executive orders, President Joe Biden served notice Thursday that America's war on COVID-19 is under new command, promising an anxious nation progress to reduce infections and lift the siege it has endured for nearly a year.

At the same time, he tried to manage expectations in his second day in office, saying despite the best intentions “we're going to face setbacks.” He brushed off a reporter's question on whether his goal of 100 million coronavirus shots in 100 days should be more ambitious, a point pressed by some public health experts.

The 10 orders signed by Biden are aimed at jump starting his national COVID-19 strategy to increase vaccinations and testing, lay the groundwork for reopening schools and businesses, and immediately increase the use of masks — including a requirement that Americans mask up for travel. One directive calls for addressing health care inequities in minority communities hard hit by the virus.

Dr. Anthony Fauci was asked Thursday about his experience working in former President Donald Trump’s administration. “It was really something that you didn’t feel you could actually say something and there wouldn’t be any repercussions about it,” said Fauci. “The idea that you can get up here and talk about what you know, what the evidence, what the science is. It is somewhat of a liberating feeling.”

“We didn’t get into this mess overnight, and it will take months to turn this around,” Biden said at the White House. U.S. deaths have have surged past 400,000, and he noted projections that they could reach 500,000 in a month.

But then, looking directly into the TV camera, Biden declared: "To a nation waiting for action, let me be clear on this point: Help is on the way.”

The new president has vowed to take far more aggressive measures to contain the virus than his predecessor, starting with stringent adherence to public health guidance. A key difference is that under Biden, the federal government is assuming full responsibility for the COVID response. And instead of delegating major tasks to states, he is offering to help them with technical backup and federal money.

He faces steep obstacles, with the virus actively spreading in most states, vaccine shortages, slow progress on distribution and political uncertainty over whether congressional Republicans will help him pass a$1.9 trillion economic relief and COVID response package.

Dr. Anthony Fauci on Thursday said new data indicated the existing COVID-19 vaccines were still effective against new variants. “Right now from the reports we have literally as of today, it appears that the vaccines will still be effective against them with the big caveat that you want to play close attention to it,” Fauci said.

Adding to the challenges are virus mutations, particularly one that has emerged in South Africa, that may make vaccines somewhat less effective. Dr. Anthony Fauci told reporters at the White House briefing that “we are paying very close attention to it.” Biden's plan includes an expansion of research capabilities to map out the genetic structure of new variants.

On Thursday a group influential with Republican office holders lent its support to the president's strategy. The U.S. Chamber of Commerce said, “We support the new administration’s focus on removing roadblocks to vaccinations and reopening schools, both of which are important steps to accelerating a broad-based economic recovery for all Americans.”

Biden officials have said they've been hampered by a lack of cooperation from the Trump administration during the transition. They say they don’t have a complete understanding of their predecessors’ actions on vaccine distribution. And they face a litany of complaints from states that say they are not getting enough vaccine even as they are being asked to vaccinate more categories of people.

Biden's mask order for travel applies to airports and planes, ships, intercity buses, trains and public transportation. Travelers from abroad must furnish a negative COVID-19 test before departing for the U.S. and must quarantine upon arrival. Biden has already mandated masks on federal property.

Although airlines, Amtrak and other transport providers now require masks, Biden's order makes it a federal mandate, leaving little wiggle room for passengers tempted to argue about their rights. The action was applauded by airline unions and supported by a major industry trade group.

It marks a sharp break with the culture of President Donald Trump's administration, under which masks were optional, and Trump made a point of going maskless and hosting big gatherings of like-minded supporters. Science has shown that masks, properly worn, cut down on coronavirus transmission.

Biden said his administration's coronavirus decisions would be based on science, not politics.

Biden is seeking to expand testing and vaccine availability, with the goal of 100 million shots in his first 100 days in office. But some independent experts say his administration should strive for two or three times that number. Even with the slow pace of vaccinations, the U.S. is already closing in on 1 million shots a day. 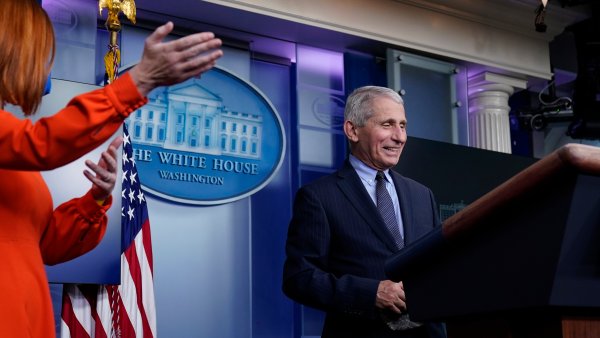 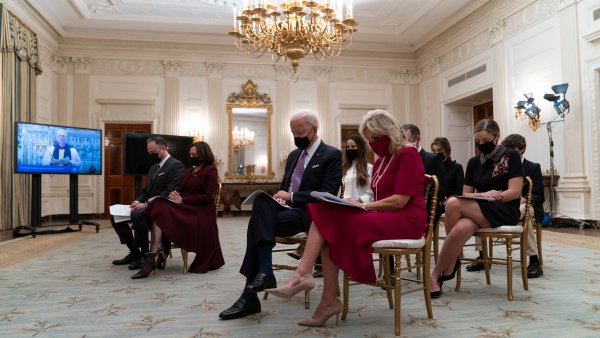 Asked about that at the White House on Thursday, Biden told a reporter: “When I announced it, you all said it’s not possible. Come on, give me a break, man.”

Fauci told reporters the U.S. could return to “a degree of normality” by the fall if the vaccination campaign goes well. Achieving widespread or “herd” immunity would require vaccinating as many as 280 million people.

Biden has directed the Federal Emergency Management Agency to begin setting up vaccination centers, aiming to have 100 up and running in a month. He's ordering the Centers for Disease Control and Prevention to begin a program to make vaccines available through local pharmacies starting next month, building on a plan devised by the Trump administration. And he's launching an effort to train more people to administer shots.

Biden has set a goal of having most K-8 schools reopen in his first 100 days, and he's ordering the departments of Education and Health and Human Services to provide clear guidance for reopening them safely. States would also be able to tap FEMA’s Disaster Relief Fund to help get schools back open.

Getting schools and child care going will help ease the drag on the U.S. economy, making it easier for parents to return to their jobs and for restaurants to find lunch-time customers.

Biden is giving government agencies a green light to use the Cold War-era Defense Production Act. It allows the government to direct private industry to produce supplies needed in times of national emergency. In this case it could be anything from swabs, to masks, to certain chemicals.

At a national memorial for the more than 400,000 Americans who have died from COVID-19, President-elect Joe Biden and Vice President-elect Kamala Harris paid their respects to the victims. “To heal, we must remember,” Biden said. “It’s hard sometimes to remember, but that’s how we heal.”

“We do not have nearly enough testing capacity in this country,” said White House coronavirus coordinator Jeff Zients.

The Biden plan estimates that a national vaccination strategy with expanded testing requires $160 billion, and he wants an additional $170 billion to aid the reopening of schools and universities.

As part of his strategy, Biden ordered establishment of a Health Equity Task Force to ensure that minority and underserved communities are not left out of the government's response. Blacks, Latinos and Native Americans have borne a heavy burden of death and disease from the virus. Surveys have shown vaccine hesitancy is higher among African Americans, a problem the administration plans to address through an education campaign.