Trump Blames ‘Domestic Terror' for Violence During Visit to Kenosha

Trump aides believe that tough-on-crime stance will help him with voters and that the more the national discourse is about anything other than the coronavirus, the better it is for the president

President Donald Trump stood at the epicenter of the latest eruption over racial injustice Tuesday and came down squarely on the side of law enforcement, blaming “domestic terror” for the violence in Kenosha, Wisconsin, and making no nod to the underlying cause of anger and protests — the shooting of yet another Black man by police.

Trump declared the violence “anti-American." He did not mention Jacob Blake, who was left paralyzed after being shot in the back seven times by an officer last week in Kenosha.

Soon after arriving in the city, a visit made over the objections of state and local leaders, Trump toured the charred remains of a block besieged by violence and fire. With the scent of smoke still in the air, he spoke to the owners of a century-old store that had been destroyed and continued to link the violence to the Democrats, blaming those in charge of Kenosha and Wisconsin while raising apocalyptic warnings if their party should capture the White House.

Governor of Wisconsin Tony Evers addressed the unrest in Kenosha at a press conference on Thursday, a day after police arrested a 17-year-old for the shooting of racial justice protesters. Evers was joined by the Wisconsin lieutenant governor and the National Guard, who spoke about maintaining peaceful protests.

“These are not acts of peaceful protest but, really, domestic terror,” said Trump. And he condemned Democratic officials for not immediately accepting his offer of federal enforcement assistance, claiming, “They just don’t want us to come."

The city has been the scene of protests since the Aug. 23 shooting of Blake, who was shot as he tried to get into a car while police were trying to arrest him. Protests have been concentrated in a small area of Kenosha. While there were more than 30 fires set in the first three nights, the situation has calmed since then.

Trump's motorcade passed throngs of demonstrators, some holding American flags in support of the president, others jeering while carrying signs that read Black Lives Matter. A massive police presence, complete with several armored vehicles, secured the area, and barricades were set up along several of the city’s major thoroughfares to keep onlookers at a distance from the passing presidential vehicles.

Offering federal resources to help rebuild the city, Trump toured a high school that had been transformed into a heavily fortified law enforcement command post. He said he tried to call Blake’s mother but opted against it after the family asked that a lawyer listen in.

Trump later added he felt “terribly" for anyone who suffered a loss, but otherwise only noted that the situation was “complicated" and “under investigation." The only words acknowledging the concerns of African Americans came from a pastor who attended Trump's law enforcement roundtable.

Pressed by reporters, Trump repeatedly pivoted away from assessing any sort of structural racism in the nation or its police departments, instead blasting what he saw as anti-police rhetoric. Painting a dark portrait of parts of the nation he leads, the president predicted that chaos would descend on cities across America if voters elect Democrat Joe Biden to replace him in November.

Biden hit back, speaking to donors on a fundraising call after Trump left Kenosha.

“Donald Trump has failed to protect America. So now he’s trying to scare the hell out of America," Biden said. "Violence isn’t a problem in Donald Trump’s eyes. It’s a political strategy.”

President Donald Trump discussed split-second decisions made by law enforcement saying "they choke, sometimes" and that is what get's all the attention, but the "tens of thousands of great things they do, nobody covers that."

The election is playing out in “anxious times,” with “multiple crises," Biden said. He included police violence in the list, along with the coronavirus pandemic and its economic fallout, and said Trump refuses to address any of them honestly.

Trump aides believe that his tough-on-crime stance will help him with voters and that the more the national discourse is about anything other than the coronavirus, the better it is for the president.

Biden said after Trump's Wisconsin visit: "The vast majority of cops are honorable, decent and real. But the idea that he wouldn’t even acknowledge the problem — and white nationalists are raising their heads all across the country.”

Trump condemned unrest in Portland, Oregon, too, where a supporter was shot and killed recently — and an increase in shootings in cities including Chicago and New York — and tried to take credit for stopping the violence in Kenosha with the National Guard. But it was Wisconsin’s Democratic governor, Tony Evers, who deployed the Guard to quell demonstrations in response to the Blake shooting, and he had pleaded with Trump to stay away for fear of straining tensions further. 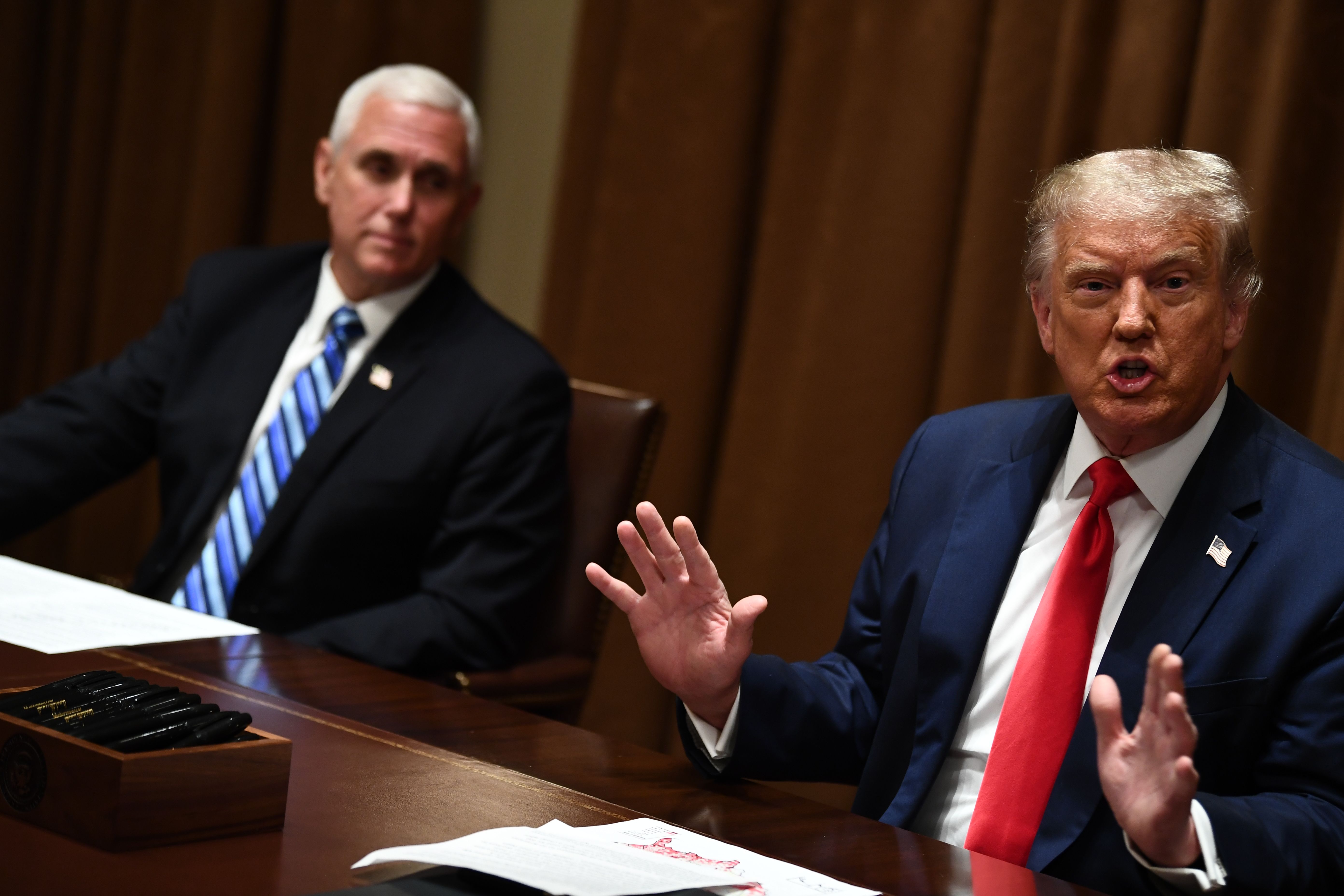 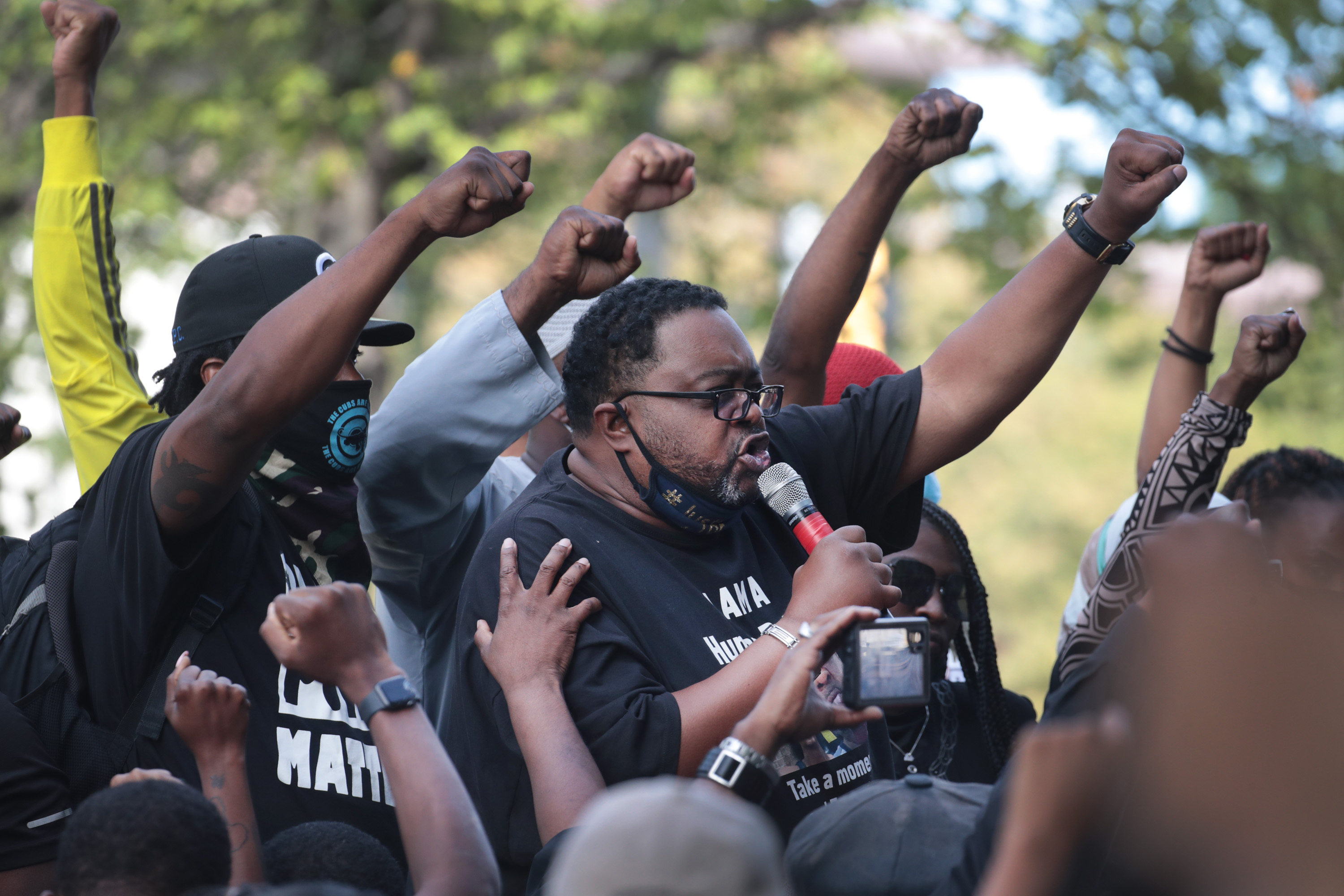 Ailing Kenosha on Edge as Trump Visit Looms Amid Tensions

Biden has assailed Trump as an instigator of the deadly protests that have sprung up on his watch. On the eve of his visit, Trump defended a teenager accused of fatally shooting two men at a demonstration in Kenosha last week, though he did not mention the young man Tuesday.

Claiming the mantle of the “law and order” Republican candidate, Trump insists that he, not Biden, is the leader best positioned to keep Americans safe. He said his appearance in Kenosha would “increase enthusiasm” in Wisconsin, perhaps the most hotly contested battleground state in the presidential race.

Blake’s family held a Tuesday “community celebration” at a distance from Trump’s visit.

President Trump and Joe Biden are preparing to return to the campaign trail after a weekend of protests. Biden will speak Monday in Pittsburgh, while the president on Tuesday will take his law and order message to Kenosha, Wisconsin. The president's planned visit, which does not include a meeting with Jacob Blake's family, comes despite requests from the governor and mayor to stay away.

“We don’t need more pain and division from a president set on advancing his campaign at the expense of our city,” Justin Blake, an uncle, said in a statement. “We need justice and relief for our vibrant community.”

The NAACP said Tuesday neither candidate should visit the Wisconsin city as tension simmers. Biden's team has considered a visit to Kenosha and had previously indicated that a trip to Wisconsin was imminent but has not offered details.

Protests in Kenosha began the night of Blake’s shooting, Aug. 23, and were concentrated in the blocks around the county courthouse downtown. There was an estimated $2 million in damage to city property, and Kenosha's mayor has said he is seeking $30 million from the state to help rebuild.

Trump announced Tuesday that his administration was making $5 million available to the city and sending than $42 million to the state, with most of the funding aimed at bolstering law enforcement, he said.

The violence reached its peak the night of Aug. 25, two days after Blake was shot, when police said the 17-year-old armed with an illegal semi-automatic rifle shot and killed two protesters in the streets. Since then marches organized both by backers of police and Blake’s family have all been peaceful with no vandalism or destruction to public property.

Biden, all the while, has tried to refocus the race on what has been its defining theme — Trump’s handling of the coronavirus pandemic, which has left more than 180,000 Americans dead — after a multi-day onslaught by the president’s team to make the campaign about the violence rattling American cities.

Biden's wife, Jill, on Tuesday kicked off a multi-week, 10-city tour of schools disrupted by the pandemic in eight battleground states, drawing a direct line from the empty classrooms to the administration's failures combating COVID-19.

During her tour of a Wilmington, Delaware, school, she spoke with teachers and administrators about doubts that in-person learning will actually resume anytime soon and the challenges — including obtaining new small desks and protective equipment to make sure classrooms can handle social distancing — if they do. She said feelings about heading back to school “have turned from excitement into anxiety, and the playgrounds are still.”