Twenty-two states in all, largely across the South, West and Midwest, already have total or near-total bans on their books

The leaked draft of a Supreme Court abortion opinion that would overturn the landmark Roe v. Wade decision is shaking the U.S. political landscape in what has been expected to be a difficult election year for Democrats.

While the Democrats decried the draft, they suddenly have a clear, unifying message. The real possibility that abortion could be outlawed in dozens of states in the coming months could animate their dejected base — especially young voters, people of color and suburban women, who are unhappy with the pace of progress under Democratic leadership in Washington.

Republicans, meanwhile, are struggling to contain their excitement at the prospect of winning a decades-long fight, even as they suggest Democrats are exaggerating the likely real-world impact of a Roe reversal.

The draft opinion surfaced just as the most competitive phase of the primary season was beginning, with races unfolding Tuesday in Ohio and Indiana. While the political fallout will take months to settle, this much is clear: Rarely in the modern era has a Supreme Court case had the potential to so dramatically reshape American life and politics.

“I hope that women across this country are going to rise up and realize this isn’t theoretical anymore," warned Michigan Sen. Debbie Stabenow. What's Next for Abortion After Supreme Court Draft Leak? 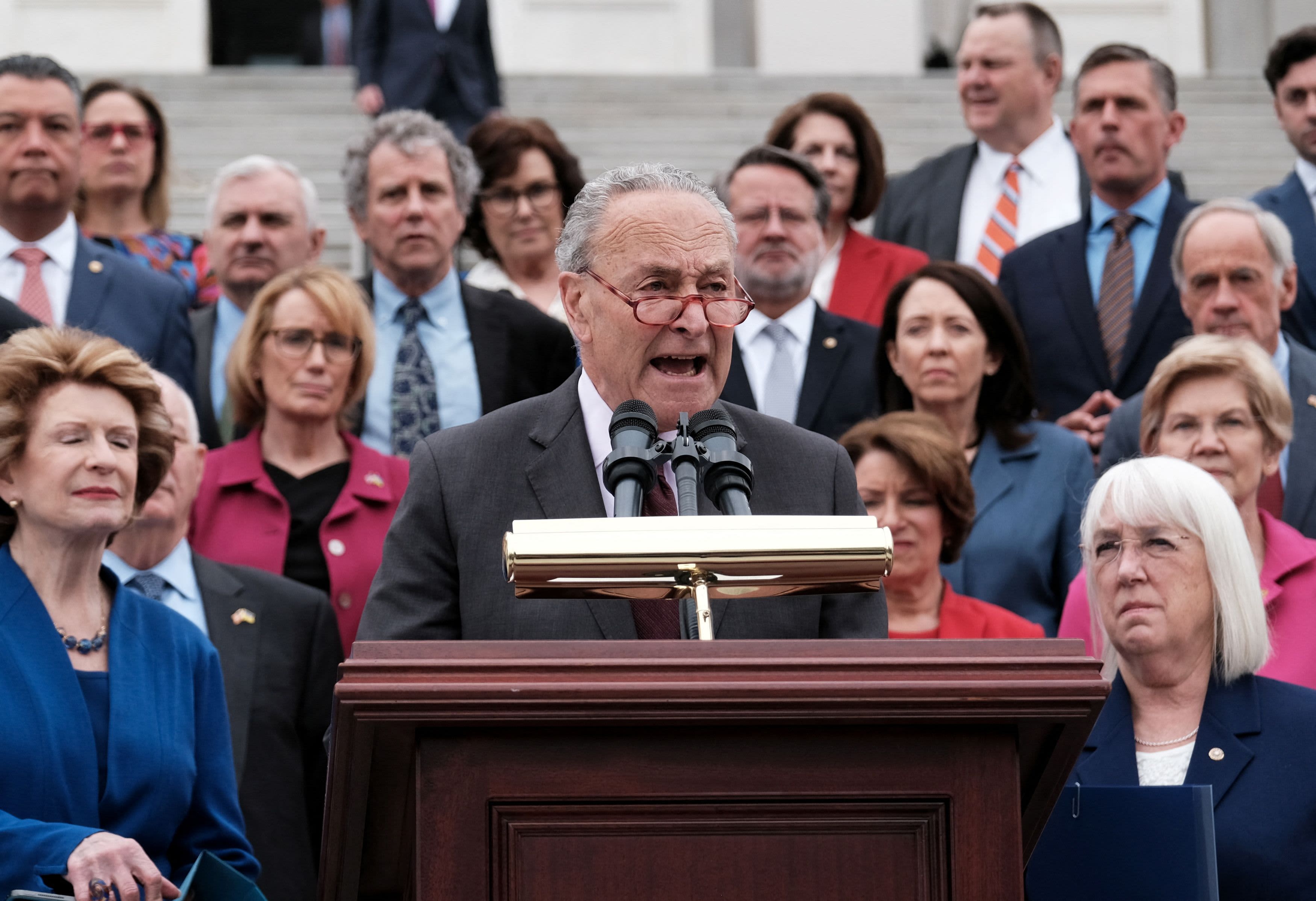 Republicans have been fighting to ban abortion since before the Supreme Court's 1973 Roe ruling, but on Tuesday many offered only modest estimates of the political impact of a decision eliminating the legal guarantee of the right.

The draft ruling, which the court emphasized was not final, would become the law of the land only after a formal announcement, which is expected in late June or early July. And privately, GOP strategists have worried that overturning Roe ahead of the election could trigger an anti-Republican backlash.

South Carolina Sen. Lindsey Graham acknowledged that a sweeping change in the nation’s abortion laws might help Democrats in November, but he suggested the election would depend more on the state of the economy than the explosive social issue.

Voters in some states would be affected more than others.

Twenty-two states in all, largely across the South, West and Midwest, already have total or near-total bans on their books — almost all now blocked in court because of Roe. They include deep-red states with elections this fall including Idaho, Missouri, North Dakota and Utah. But they also include high-profile swing states including Pennsylvania, Arizona, Michigan, Ohio and Wisconsin.

A White House adviser said a Roe reversal would serve as a galvanizing force for key segments of President Joe Biden's coalition, giving Democrats a clear message to link to the midterm elections. At the same time, the adviser, who requested anonymity to discuss internal strategies, acknowledged that an abortion change might not be enough on its own to overcome political headwinds come November.

Biden's popularity remains weak amid increasing concerns about inflation and the direction of the country. History also suggests that the party that controls the White House almost always suffers losses in the first congressional elections of a new presidency.

In one ominous sign, grassroots Democratic fundraising, usually a mark of enthusiasm, was noticeably sluggish in the hours after the draft decision was leaked.

After a U.S. Supreme Court draft was leaked threatening to overturn Roe v. Wade, a landmark decision that gave women the federal right to legal abortion in America, questions have risen over which states this would impact. NBC 5's Stefan Holt reports.

The Democratic fundraising platform, ActBlue, drew less than $3 million in donations between 6:30 a.m. and 1 p.m. on Tuesday. By contrast, the platform took in $71 million in the 24 hours after former Supreme Court Justice Ruth Bader Ginsburg's death.

As Democratic officials across the nation tried to sound the alarm, Republicans were quietly confident.

“There are now three things in life you can count on: death, taxes and Dems overplaying any hand,” said Republican strategist Chris Wilson, who is involved in several top elections this year. He noted that Democrats in states like New York and California wouldn't be affected by abortion bans in Republican-led states.

For most Democrats, Wilson said, “life goes on exactly as usual.”

But there are several swing states with Republican-controlled legislatures where November elections for governor may ultimately decide a woman's right to abortion, Georgia, North Carolina, Arizona, Wisconsin, Pennsylvania and Michigan, among them.

Even in states unlikely to outlaw abortions in the short term, Democrats are hopeful that a renewed focus on the issue will help their candidates overcome the party's other political challenges.

New Jersey Democratic Rep. Tom Malinowski, a top target of Republicans, cast this year’s election as centering on abortion rights, arguing that a GOP majority in Congress could pursue a nationwide ban that would overrule New Jersey’s law on the right.

“That’s the stake in this election in November that all of us have to remember," Malinowski said in an interview. "Are we going to preserve a majority in the House of Representatives, in the Senate that will protect 50 years of settled law in this country, that will protect a woman’s right to choose?”

In a draft Supreme Court opinion on Roe v. Wade, Justice Samuel Alito argues that rights need to be "deeply rooted in the nation's history and tradition" to be protected. "If that's their approach, then the right to contraception might equally be seen as 'not deeply rooted in our nation's history and tradition,'" says Caroline Mala Corbin, a University of Miami law professor.

Nevada Sen. Catherine Cortez Masto and New Hampshire Sen. Maggie Hassan, among the nation's most vulnerable Democrats this fall, also seized on the issue as critical in their upcoming elections.

“Do not underestimate what this decision would mean for women in Nevada and across the country,” Cortez Masto said in an interview. “If this court issues a ruling to overturn Roe vs. Wade, it will enrage women across the country who have lived for the last almost 50 years the right to choose."

From New Hampshire, Hassan said the leaked opinion clarifies the stakes this fall for voters in her state and beyond. She called a potential Roe reversal "devastating to women all across New Hampshire, all across the country and for all people who really believe in our individual freedoms.”

An abortion focus would also offer a sharp contrast with her Republican opponents, whom she described as “extremists” on abortion.

Some Republicans welcomed the fight.

Marjorie Dannenfelser, who leads the anti-abortion Susan B. Anthony List, said her group's fundraising has surged all year in line with excitement over a potential Roe reversal. Social conservatives have been waiting for this moment for decades, she said.

“I think this is an important issue to many people, but so is inflation, so is crime, so is the border,” Scott said.

States and the Department of Justice are waging court battles over the right to abortion that the Supreme Court outlined in Roe v. Wade. But in 1992, Planned Parenthood v. Casey, a key case that was less widely known, paved the way for some abortion restrictions - as long as they didn't meet the definition of an "undue burden." With help from Florida State law professor Mary Ziegler, we break it down in this LXplanation.