John Lynch had just finished another season in the relatively cushy job as television analyst when he decided to call Kyle Shanahan three years ago and offer up his services as a general manager if Shanahan got hired as head coach in San Francisco.

Shanahan, who was on a Super Bowl run as Atlanta’s offensive coordinator, was seeking a general manager he could work well with and jumped at the opportunity.

Niners CEO Jed York then invited Lynch for an interview in the Bay Area, starting the process that led to Shanahan and Lynch getting hired to team up to turn around a franchise mired in losing and dysfunction.

That decision to leave his job at Fox and get back working with an NFL team worked about as well as everything else Lynch seems to do in his life.

Lynch has helped build a roster that has the Niners in the Super Bowl this week against the Kansas City Chiefs, earning him the Pro Football Writers of America award as the league’s top executive in 2019.

Lynch is now looking to have an almost perfect weekend. He’s a finalist for the Pro Football Hall of Fame in voting to be conducted Saturday and could follow that up with a Super Bowl championship as an executive to join the title he won as a player in Tampa Bay 17 years ago.

“I’ve dreamt about it and here we are,” Lynch said. “It would be a real nice weekend.”

Lynch and Shanahan have formed the perfect pair in San Francisco. The two had never worked together before but were familiar with each other’s accomplishments. Shanahan studied Lynch’s play when he arrived as an assistant coach in Tampa Bay a year after Lynch had left for Denver.

Lynch then played his final four seasons for Kyle’s father, Mike, and then spent years calling Kyle’s games as an analyst on Fox.

Their team-building philosophies were so similar that when both were given a test by the 49ers on how to allocate 150 “points” as a fake salary cap to build a roster, they came up with nearly identical versions.

“Maybe they hired us for that reason,” Lynch said. 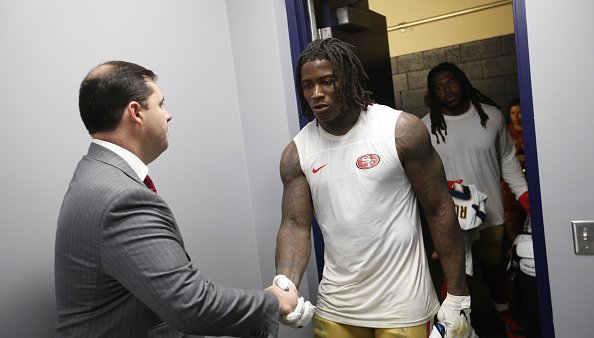 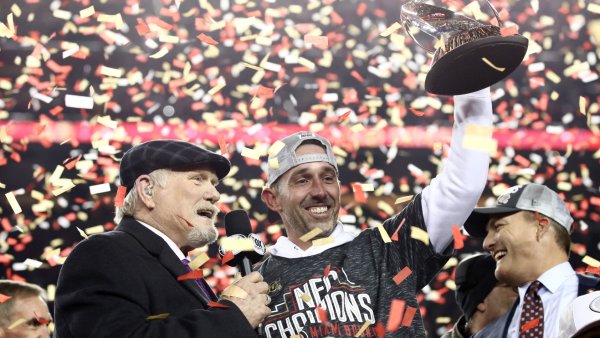 The two complement each other well. Lynch’s background is on defense as the former hard-hitting safety who played a key part on successful defenses in Tampa Bay and Denver, while Shanahan is considered an offensive guru who is one of the best play-callers in the game.

Lynch has the warmer personality and often plays the role of “good cop,” while Shanahan is far more blunt and serves as the “bad cop” when needed.

“Usually people like that just on average, usually, I think, I’m like, all right, the person’s got to be somewhat phony,” Shanahan said. “What’s he really like? No one is really Captain America. So, you’re waiting to see how they are really. That’s probably the opposite of how I am. But, then you get with John day in and day out, and that’s genuinely who he is. ... To have that type of personality that’s just exactly who he is and on top of that to be one of the most violent, physical players I’ve ever seen, I think it’s as cool of a combination as there is.”

Both were schooled in the 49ers way established by Bill Walsh back in the 1980s, with Kyle spending plenty of time around the team when his father was an assistant for three years in the 1990s and Lynch was playing for Walsh in college at Stanford.

That similar philosophy was important for York, who had endured a period of conflict between coach and general manager that had led to coach Jim Harbaugh’s departure in 2014 after the only successful run the franchise has had this century.

That relationship was put to the test early as the team started 0-9 the first season and then finished 4-12 in year two.

But it was an off-field issue that ended up proving to York he was right when he gave the two matching six-year contracts after shuffling through three coaches the previous three years.

The team had made an investment in linebacker Reuben Foster, trading up to draft him in the first round in 2017 and then sticking by him when he faced legal trouble the following offseason.

But when Foster was arrested again at the team hotel on a trip to Tampa during the 2018 season on domestic violence charges that later were dropped, the two didn’t hesitate to cut the talented player immediately.

“I don’t know that that would have been the case with every other coach or every other general manager — not just here, but across the league, because it’s hard to give up on talent,” York said. “That, to me, is one of the defining moments of John and Kyle, being able to say, ‘This is a first-round pick, in our first year, and we moved on from it,’ and it was hard, and we could have justified not moving on from it.”

The moves since then have paid off in a big way with offseason additions of pass rushers Dee Ford and Nick Bosa, along with speedy linebacker Kwon Alexander that transformed the defense into one of the league’s top units.

Then the Niners added the final piece they needed during the season when they acquired receiver Emmanuel Sanders from Denver in a trade that sparked the offense.

And now the Niners are back in the Super Bowl.

“I never thought you could equal the feeling of going to the (Super Bowl) as a player, but this one’s just as good,” Lynch said.