Of the 26 total riders named, 17 are returnees. The other nine are set to make their Olympic debuts

PyeongChang Olympic gold medalists in halfpipe – Chloe Kim and Shaun White – and slopestyle – Jamie Anderson and Red Gerard – are all returning to defend their Games titles in 2022. For White, who was also victorious in Torino and Vancouver, it'll be his fifth and likely final time competing at the Winter Olympics. Anderson, meanwhile, has a shot to accomplish the sport's first consecutive three-peat in a single event.

Of the 26 total riders named, 17 are returnees. The other nine are set to make their Olympic debuts.

Kim and White are the defending gold medalists from PyeongChang. Josey was just off the podium in sixth at those Games, while Mastro finished 12th. Gold, who sat out 2018 with injuries, took 14th in Sochi. Kalapos, Foster and Maud will make their debuts.

Watch all the action from the Beijing Olympics live on NBC 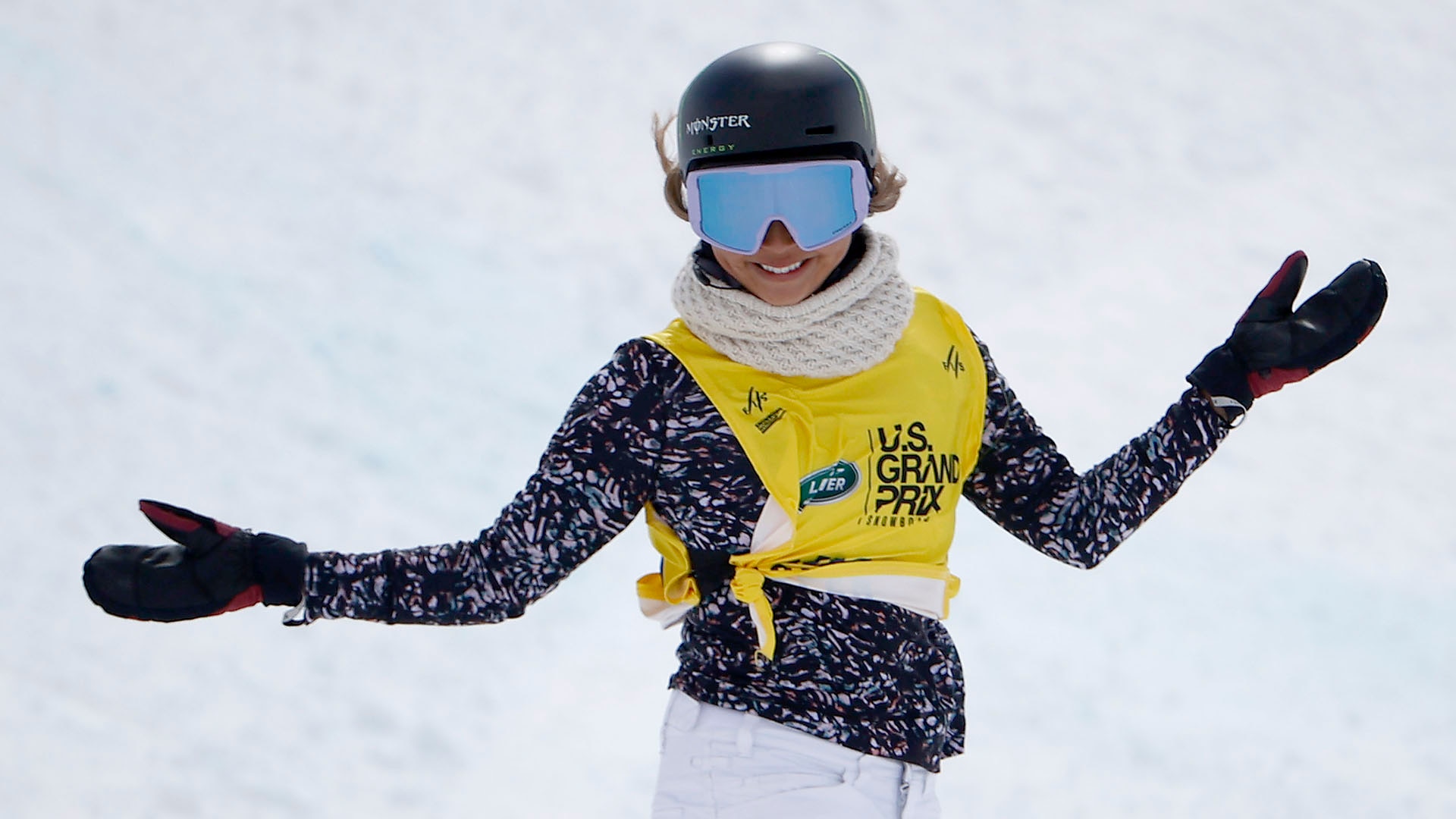 Things haven't changed much this time around, but Kim does return older and perhaps wiser after taking nearly two years off during the interim cycle to heal an ankle injury and attend Princeton University. She returned in 2021 with a renewed love for her sport.

Kim went two-for-two in the events she entered this season, clinching a Dew Tour victory on her final run and dominating the Laax Open World Cup. 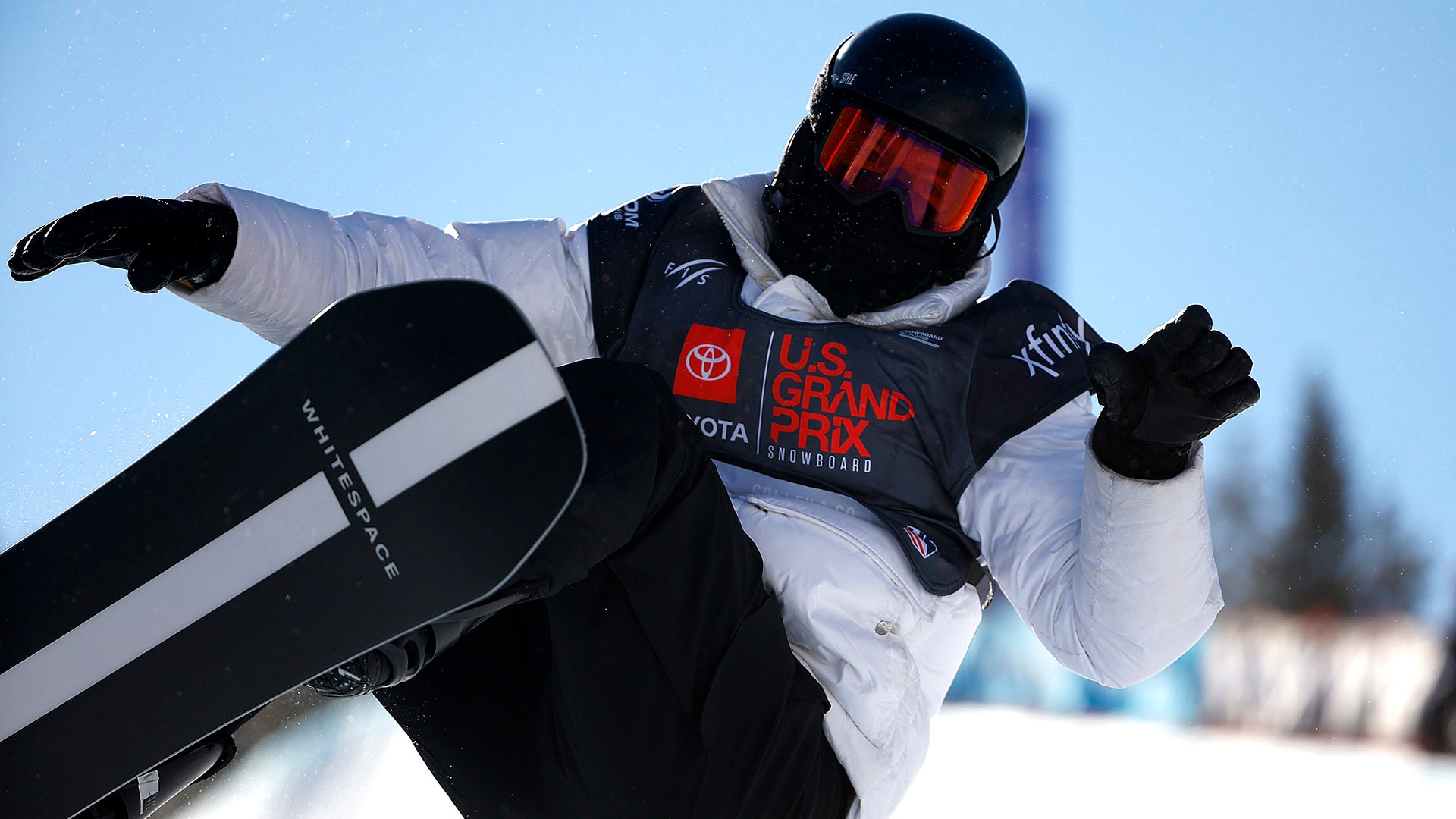 Shaun White just missed making the 2002 Olympics at age 15. JJ Thomas, who is now White's coach, took the team's last spot. There's no doubt it was a frustrating moment for the budding teenage phenom.

Fast-forward two decades later and White, at 35, now owns three Olympic gold medals and is headed to a fifth Games. He has said these may be his last, and if so, prepare yourselves to witness the legendary icon's last few drop-ins.

White began the 2022 qualifying period just off the Aspen podium in fourth, then took eighth at Copper and seventh at Dew Tour before landing a third-place finish at January's Laax Open to all but seal his monumental berth. 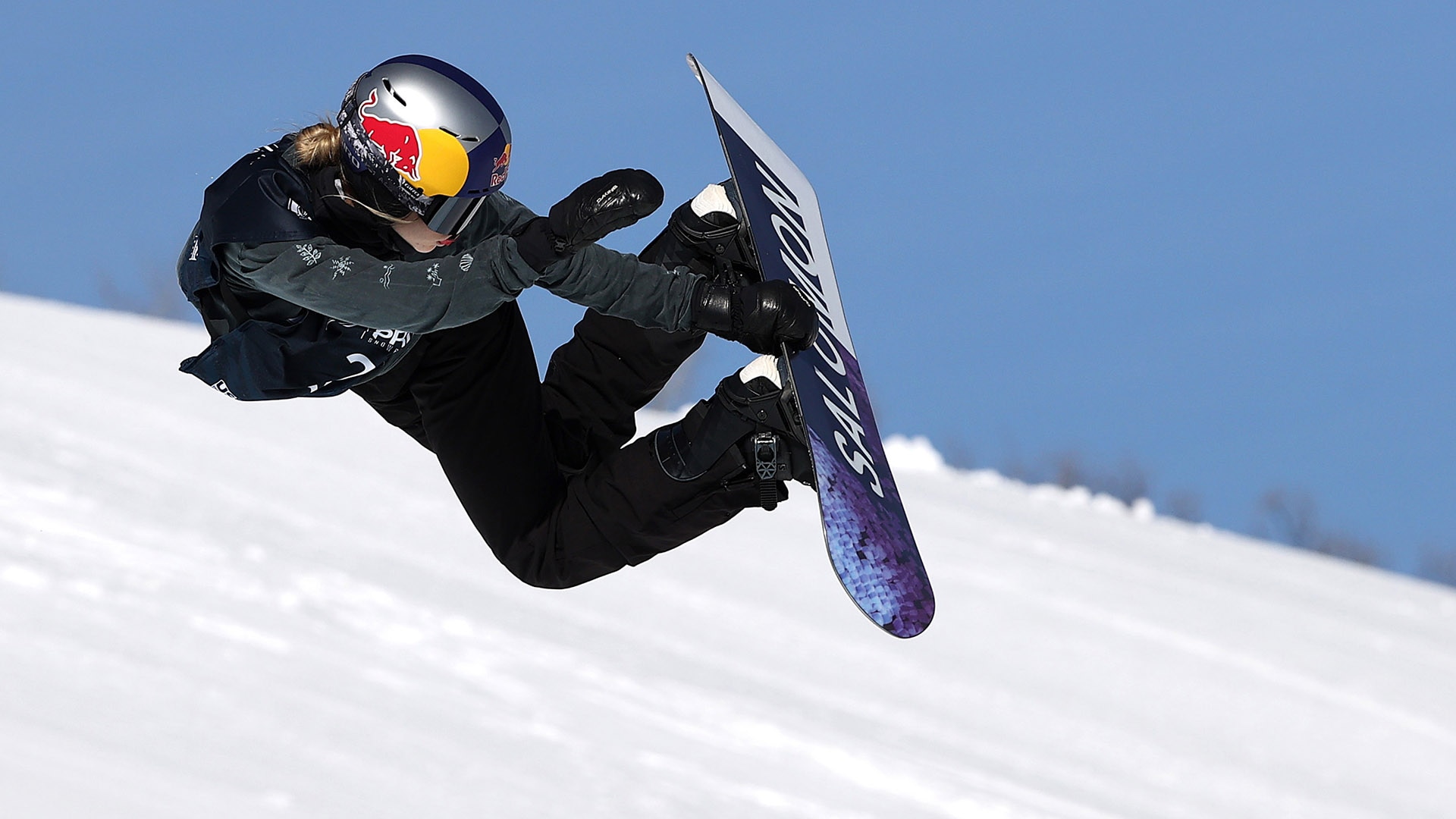 Maddie Mastro finished 12th in her Olympic debut at the 2018 PyeongChang Games. Since then she's earned two world championship medals – 2019 bronze and 2021 silver – and added a 2021 X Games silver to her bronze from 2018. Taylor Gold of the U.S. competes in the men's snowboard superpipe qualifier during the Dew Tour at Copper Mountain on Dec. 16, 2021, in Colorado.
Matthew Stockman/Getty Images

Taylor Gold's 2022 nomination clinches a non-consecutive second Olympic team for the 28-year-old Coloradan. He placed 14th in Sochi then missed the 2018 Olympic season with injuries. 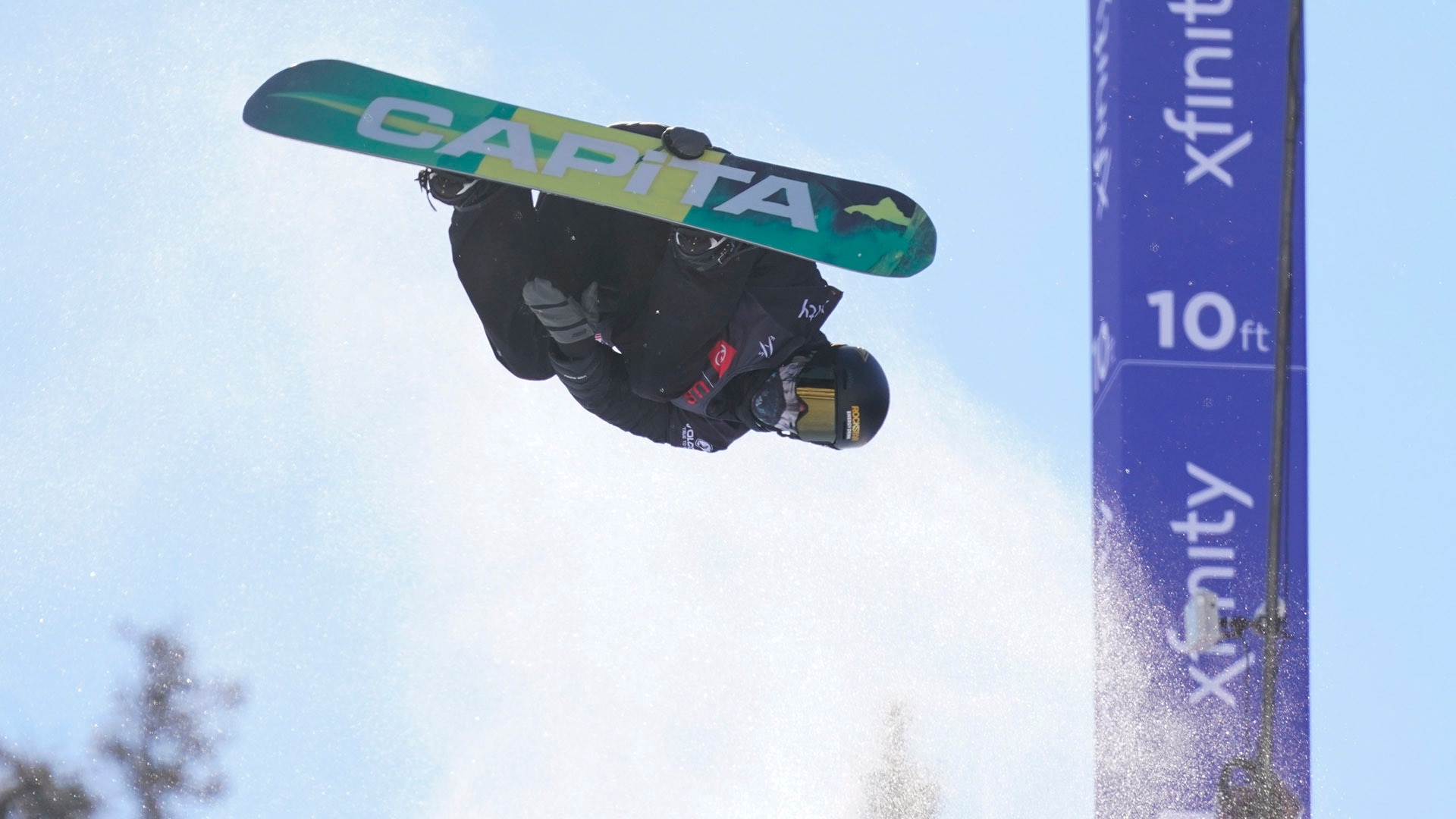 Zoe Kalapos averaged results just outside the top 10 at four of the U.S. qualifying period's major competitions: 11th at Aspen, Dew Tour and Mammoth, and 10th at Copper. Kalapos began skiing at age 2 and had a mini park in her backyard. Lucas Foster notched a pair of top-six finishes at U.S. qualifying events this season, placing sixth at Aspen and fifth at Mammoth, then added a seventh-place result earlier this month at the Laax Open in Switzerland. Tessa Maud closed out her 2021-22 World Cup tour with a season-best 11th-place finish at the Laax Open in Switzerland. She's a two-time junior world medalist with back-to-back silvers in 2018 and 2019, and just missed the 2020 Youth Olympic podium in fourth.

Anderson and Gerard are the defending slopestyle gold medalists from PyeongChang – for Anderson, her second straight time holding that title, as she's the gold medalist from Sochi as well. Also at the 2018 Games, Corning just missed the big air podium in fourth, Langland was sixth in slopestyle and Marino took 10th in big air. Henricksen, Fitzsimons and Rummel will make their Games debuts. Jamie Anderson of the United States reacts after placing first in the women's snowboard slopestyle competition at the Toyota U.S. Grand Prix at Mammoth Mountain on Jan. 08, 2022, in California.
Maddie Meyer/Getty Images

Jamie Anderson is the two-time defending Olympic gold medalist in slopestyle attempting to become the first snowboarder to three-peat in an Olympic event. Along with her third medal, a 2018 silver in big air, she's already tied for most decorated Olympic snowboarder of all time, a title she could run away with exclusively with a pair of upcoming medal opportunities.

Anderson competed in slopestyle at three of the 2021-22 U.S. qualifying events this season, placing sixth at Aspen, seventh at Dew Tour and first at Mammoth, stomping a cab double 10 in the latter to top reigning world champion Zoe Sadowski-Synnott of New Zealand, something the Californian will likely have to replicate at the Games next month.

Red Gerard of the U.S. competes in the men's snowboard slopestyle competition at the U.S. Grand Prix at Mammoth Mountain on Jan. 8, 2022, in California.
Sean M. Haffey/Getty Images

Red Gerard won slopestyle gold in PyeongChang at the age of 17, calmly sealing the victory on his final run. He was so shocked when he received his last score that he blurted out an expletive on live TV. Now he's back, ready to defend his title.

Setting aside an 11th-place finish at Big Air Steamboat, Gerard's 2021-22 slopestyle season was stellar — runner-up at Aspen, and two wins at Dew Tour and Mammoth. 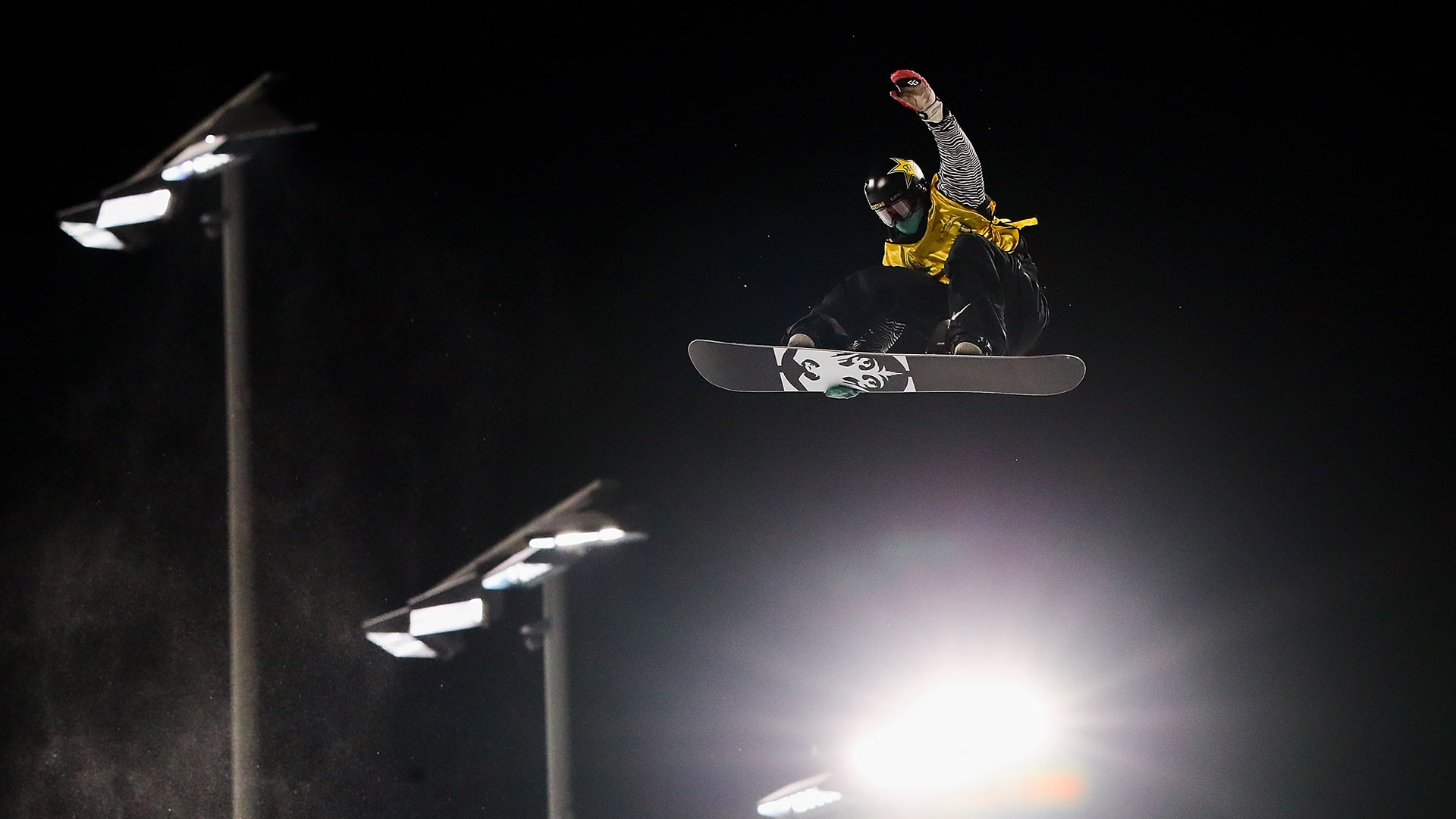 Chris Corning just missed the PyeongChang big air podium in fourth, 15.00 points off third place, at the 2018 Games. He also placed 17th in slopestyle. The next year, in 2019, he captured the world slopestyle title, adding to his bronze from 2017.

The Coloradan recorded his best result this season at Dew Tour with a runner-up finish behind Gerard in slopestyle. His last podium prior to that was third in slopestyle at last March's Silvaplana World Cup in Switzerland. Dusty Henricksen of the U.S. reacts after finishing a run in the men's snowboard slopestyle final during the 2021 FIS Snowboard and Freeski World Championships on March 12, 2021, at Buttermilk Ski Resort in Aspen, Colorado.
Ezra Shaw/Getty Images

Dusty Henricksen experienced his breakout moment a year after winning slopestyle gold at the 2020 Youth Olympics by claiming the X Games title in the event, completing runs in a T-shirt in below-freezing temperatures in Aspen. Hailey Langland of the U.S. competes in the women's snowboard slopestyle qualifications during the 2021 FIS Snowboard and Freeski World Championships on March 10, 2021, at Buttermilk Ski Resort in Aspen, Colorado.
Ezra Shaw/Getty Images

Hailey Langland placed sixth in slopestyle at the 2018 PyeongChang Games, as well as 14th in big air. Since then she's added a third X Games medal to her collection with 2019 slopestyle silver, which joins her 2016 slopestyle bronze and 2017 big air gold.

The 21-year-old had a huge slopestyle runner-up finish at Aspen to kick off 2021-22 U.S. qualifying, and followed it up with fourth at Big Air Steamboat and fifth in slopestyle at Mammoth, only faltering slightly in a 12th-place slopestyle result at Dew Tour. 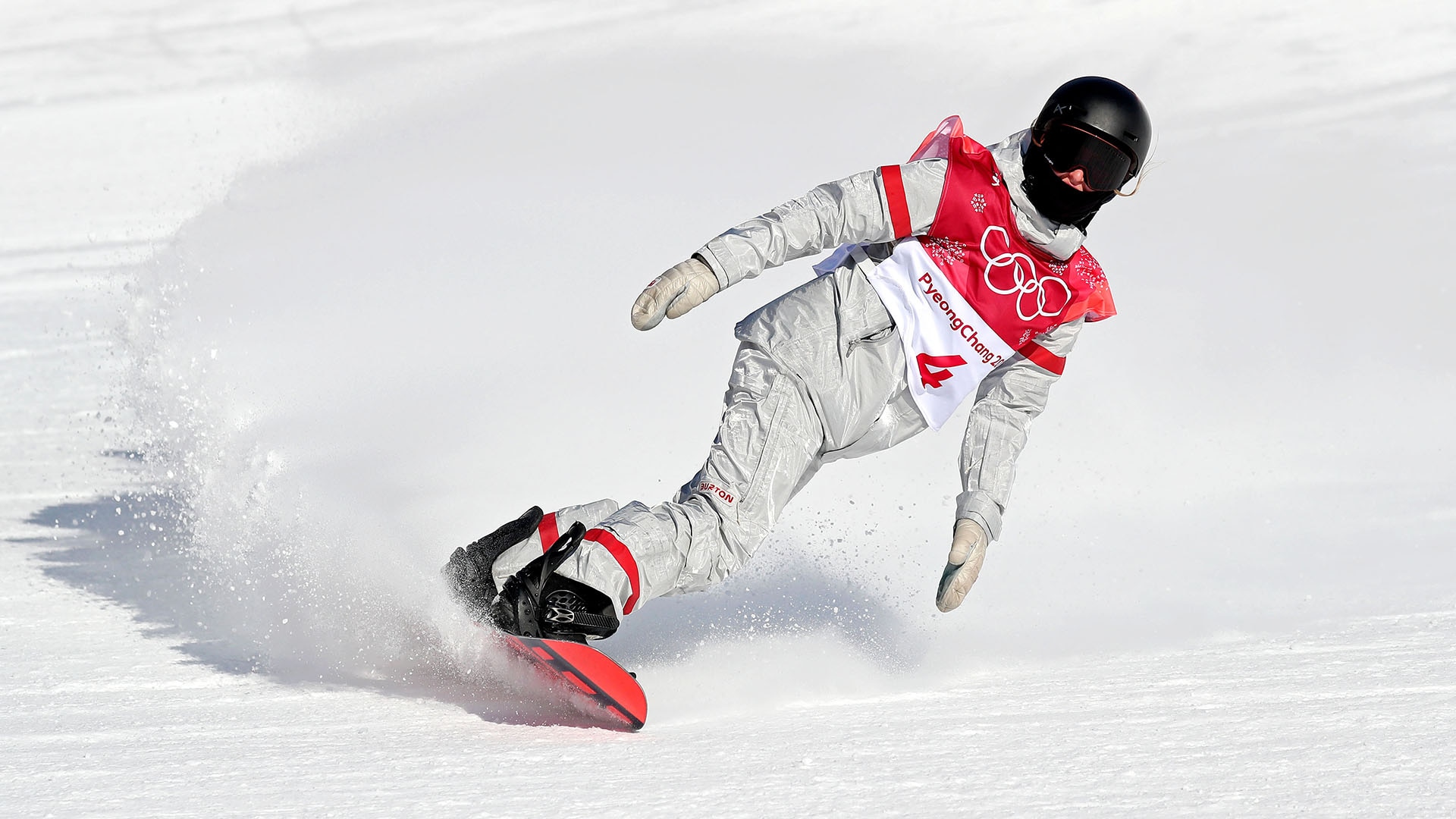 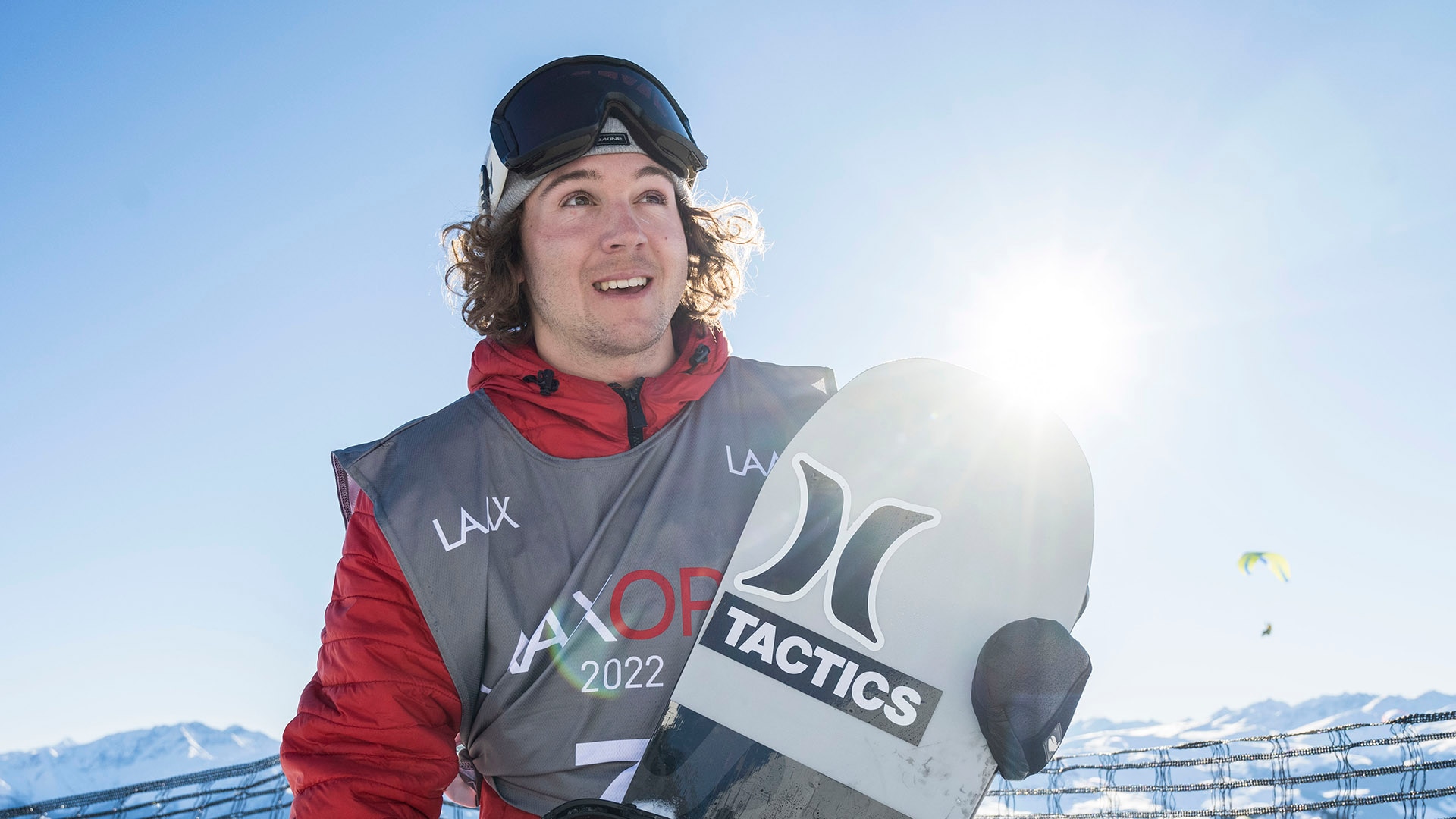 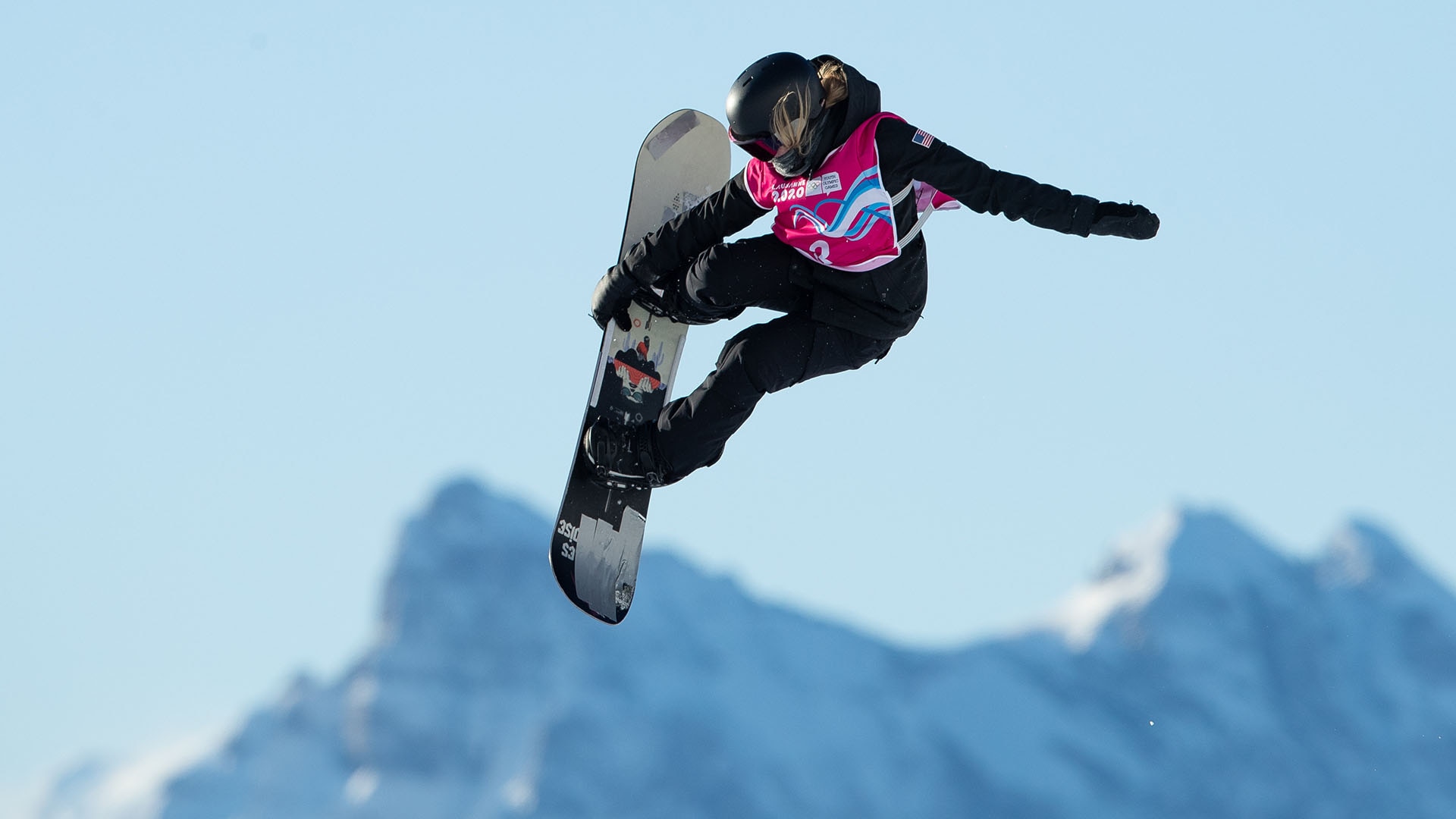 Courtney Rummel of the U.S. during qualification of the snowboarding women's slopestyle at the Leysin Park at the Winter Youth Olympic Games on Jan. 18, 2020, in Lausanne, Switzerland.
Ben Queenborough/OIS Handout Photo via USA TODAY Sports

Kearney, Dierdorff and Tierney each make their second Olympic teams, Gulini and Baumgartner their fourth and Jacobellis her fifth. Jacobellis hasn't finished worse than seventh in four Games appearances, yet her only medal is a silver from Torino in 2006. Baumgartner and Dierdorff placed fourth and fifth respectively in 2018, while Gulini was fourth in 2014 at the Sochi Games. Gaskill and Vedder are making their debuts. 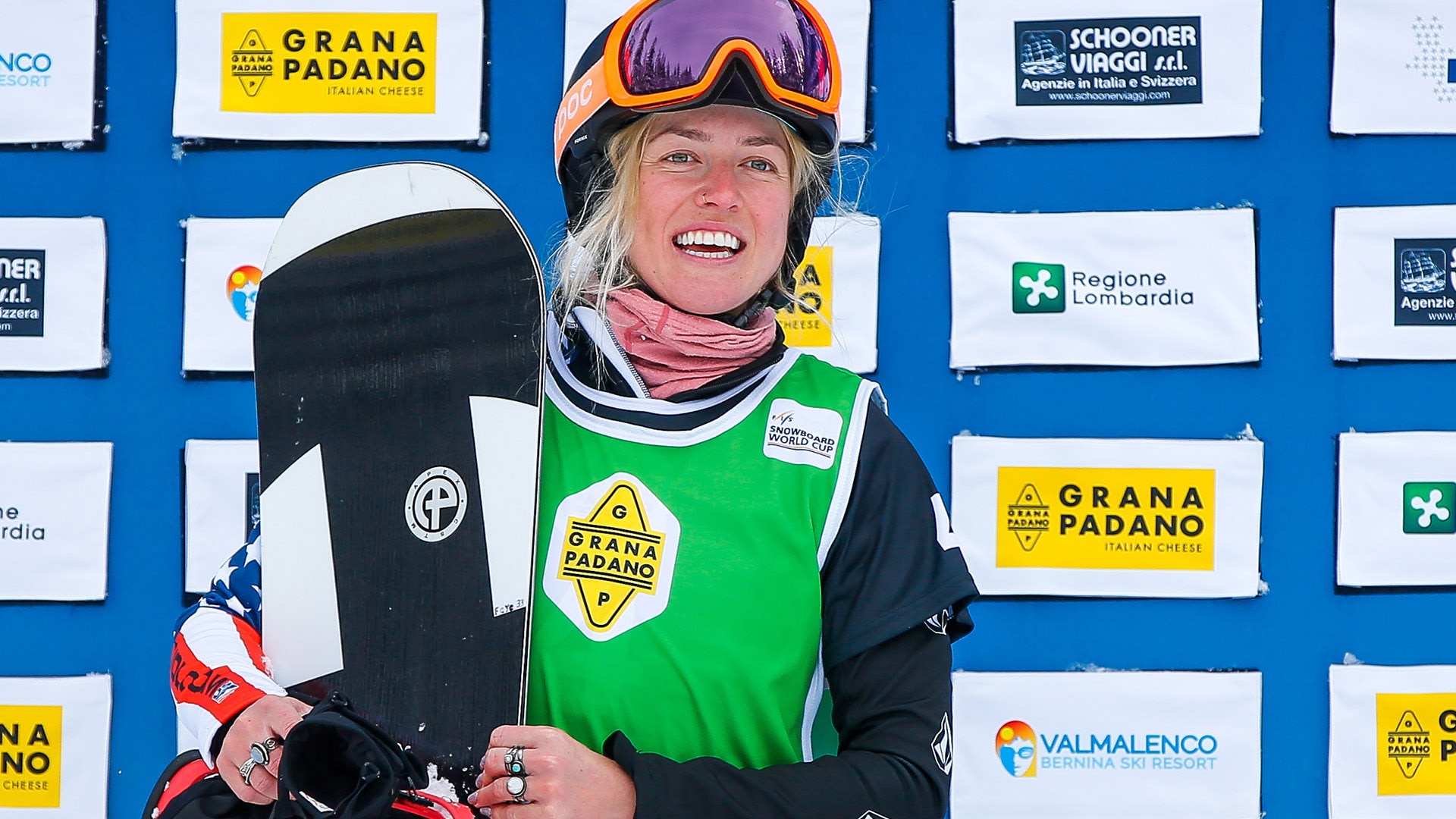 Faye Gulini makes her fourth Olympic team. She finished 12th in 2010, just missed the podium in fourth at the 2014 Sochi Games and took 21st in 2018. More recently, she placed fourth at the 2021 World Championships.

The Salt Lake City native has six career World Cup podiums though has yet to win individually on the circuit. She's earned five of those six over the past three seasons, with the latest in December, a runner-up finish at the Cervinia World Cup in Italy. 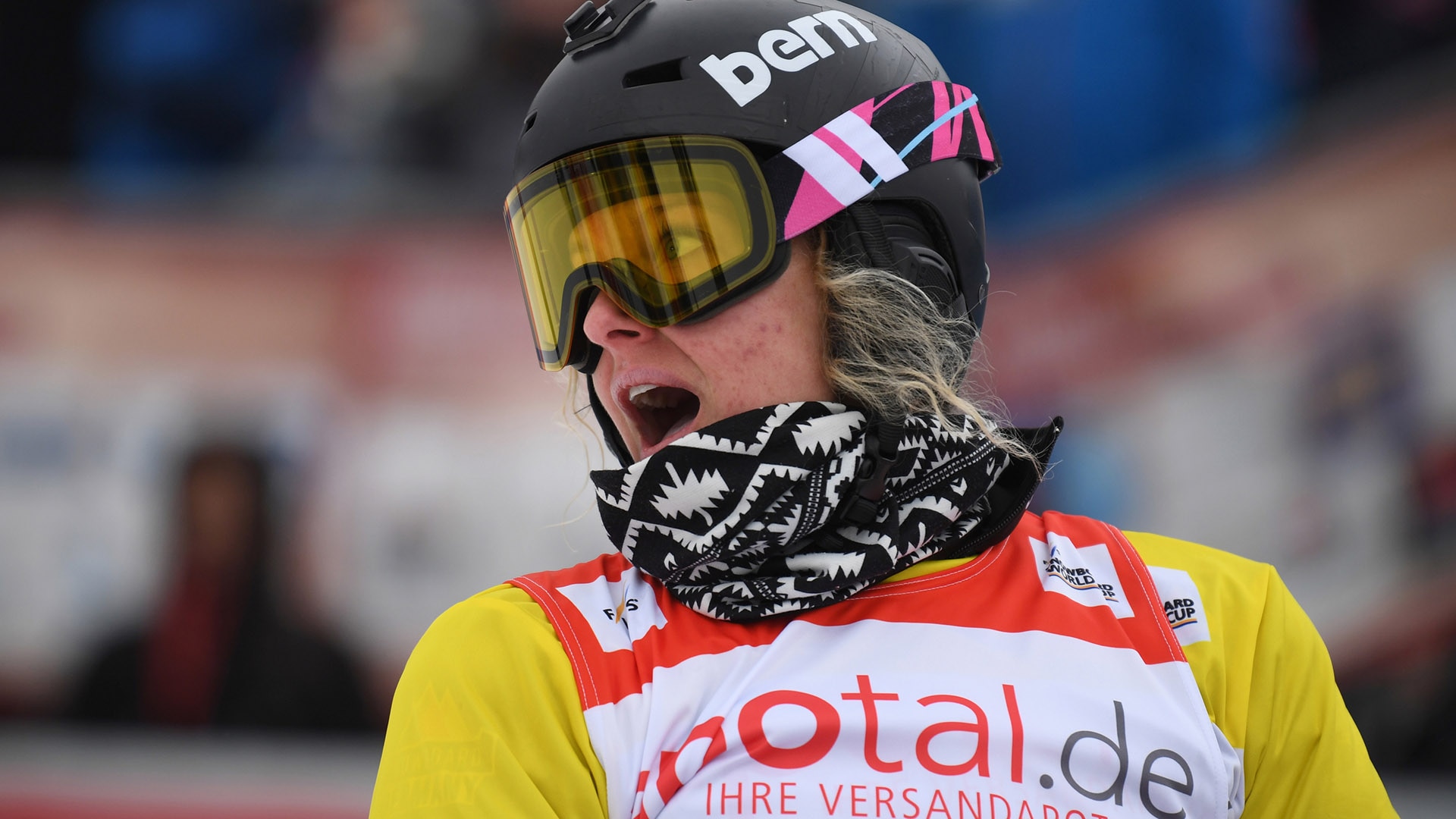 Winner Lindsey Jacobellis from the U.S. celebrates her victory at the Snowboard Cross World Cup on the Feldberg in the Black Forest on Feb. 9, 2019, in Feldberg, Germany.
Patrick Seeger/picture alliance via Getty Images

Lindsey Jacobellis, now a five-time Olympic team member, has continually proven herself outside the Games, racking up five individual world titles and 10 individual X Games wins, yet Olympic gold remains elusive for the 36-year-old Vermonter. She captured silver in her 2006 Games debut despite a fall that cost her gold, then fifth in 2010, seventh in 2014 and fourth in 2018.

Jacobellis' World Cup record is perhaps her most obscene statistic. In individual SBX alone, she has an astonishing 52 podiums and 30 wins. This season, she placed third in back-to-back World Cup competitions in Krasnoyarsk, Russia. 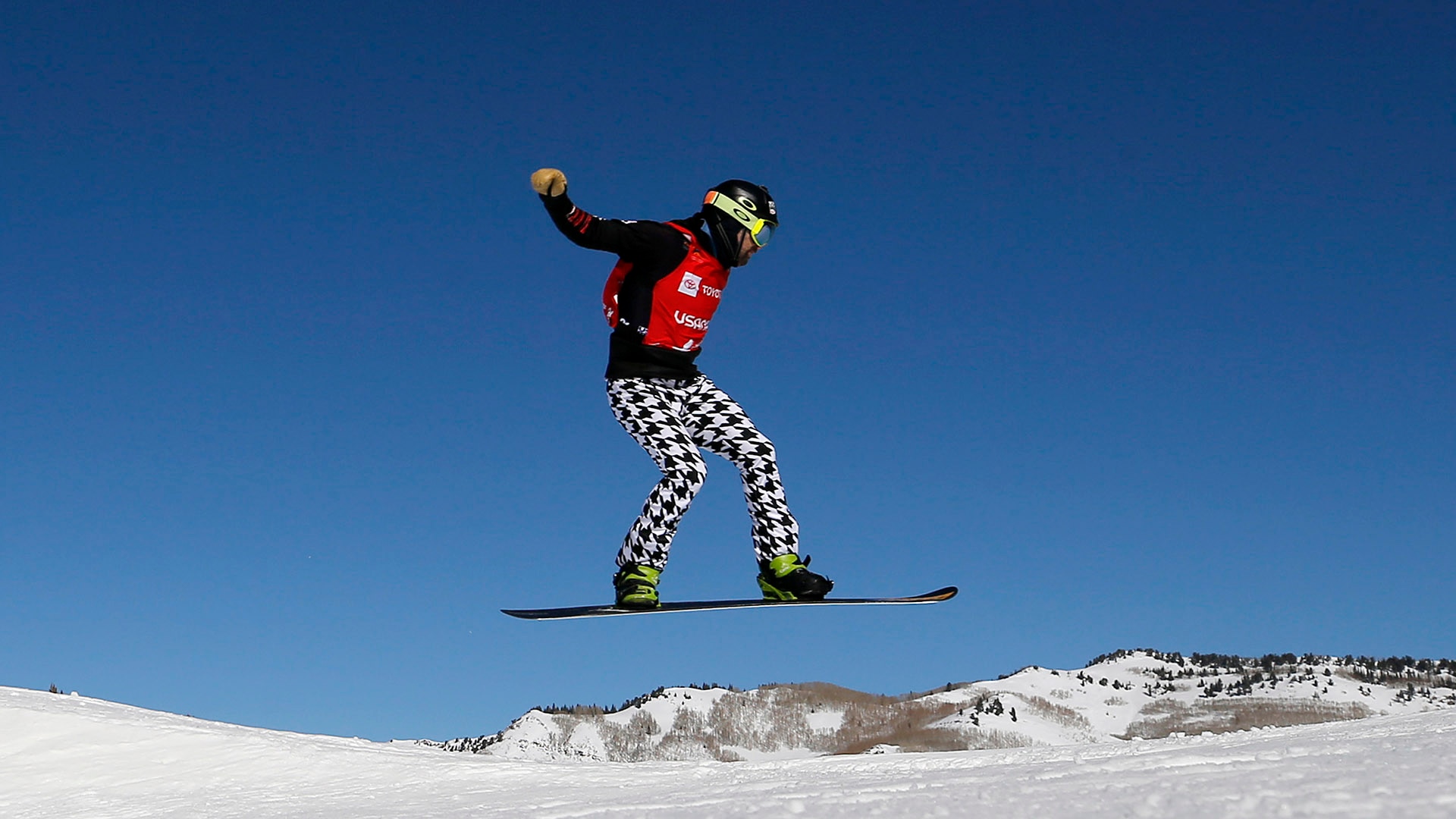 Nick Baumgartner of the U.S. competes during the first round of the men's snowboard cross final of the FIS Snowboard World Championships on Feb. 01, 2019, at Solitude Mountain Resort in Solitude, Utah.
Tom Pennington/Getty Images

Nick Baumgartner heads to the 2022 Games as the oldest U.S. Olympic snowboarder in history at age 40. A three-time Olympian, the Michigander placed 20th in 2010, 25th in Sochi and just off the podium in fourth at the 2018 PyeongChang Games. Hagen Kearney of the U.S. rides during qualifying of the Snowboard Cross (SBX) World Cup in Chiesa In Valmalenco, Sondrio, Italy, on Jan. 22, 2021.
Andrea Diodato/NurPhoto via Getty Images

Hagen Kearney placed 13th at the 2018 PyeongChang Games. He earned two of his three career World Cup podiums in 2021: third at Italy's Chiesa in Valmalenco and runner-up in Veysonnaz, Switzerland. 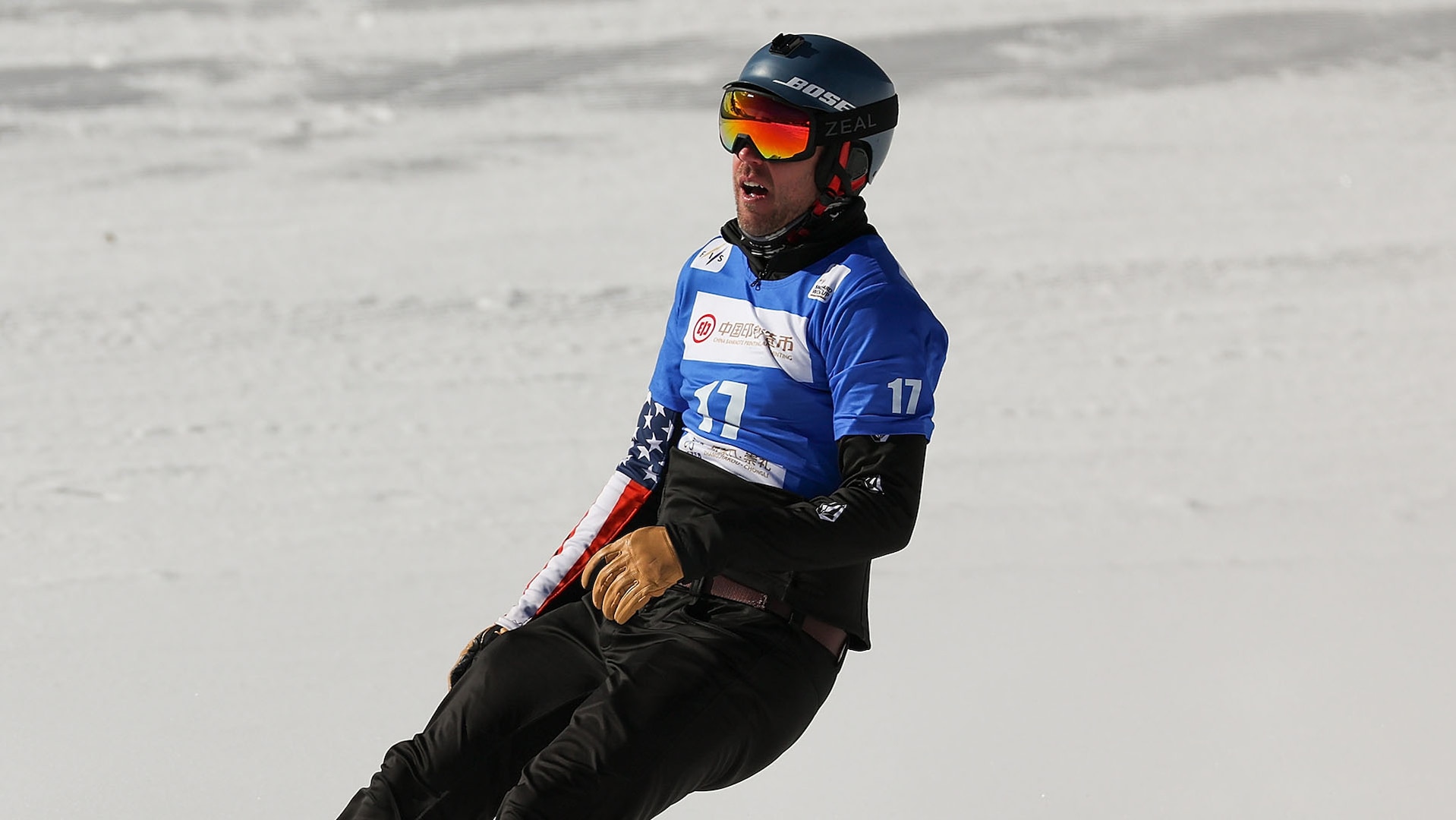 *due to an injury in late January, Deibold withdrew and was replaced by Jake Vedder 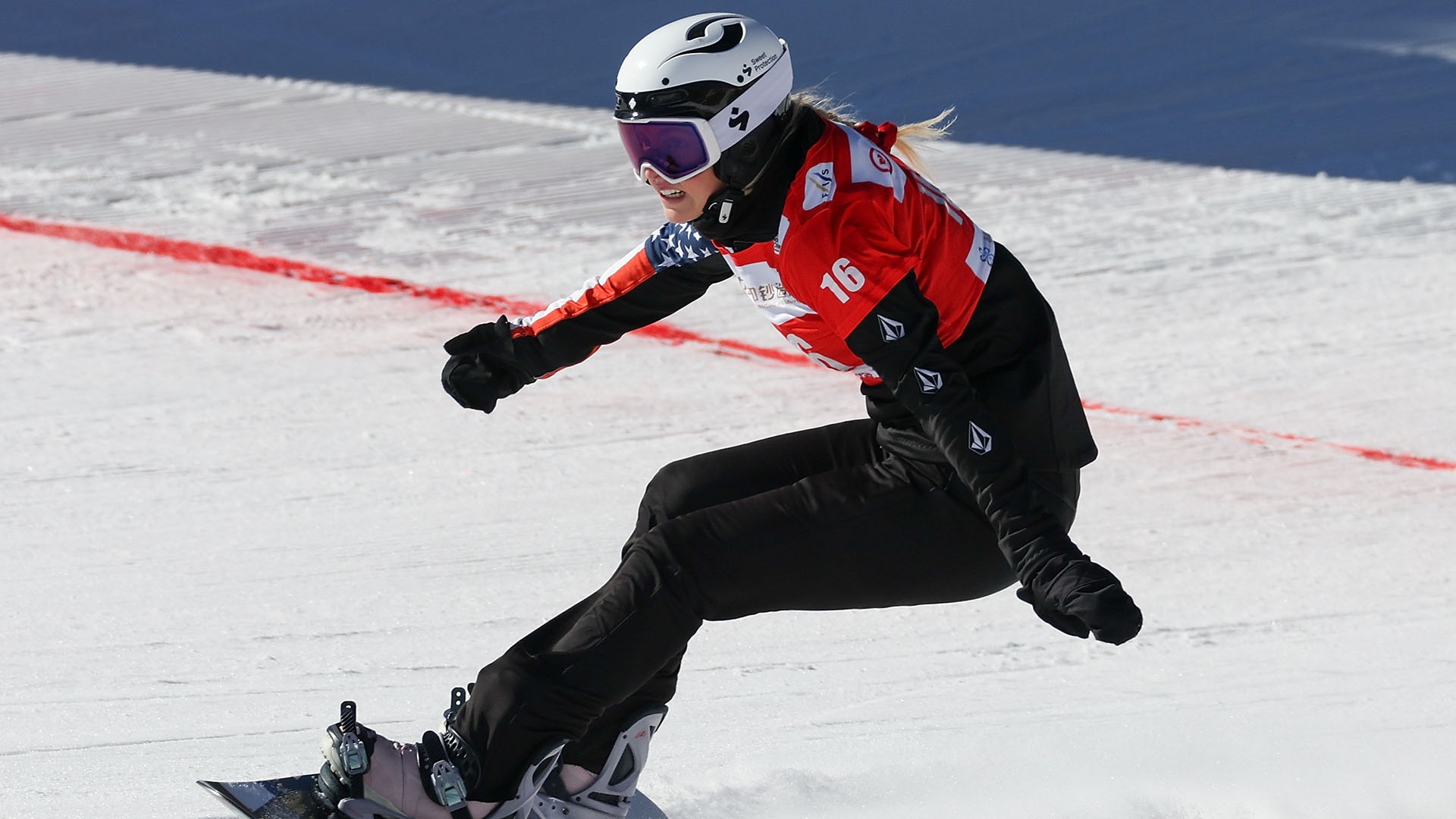 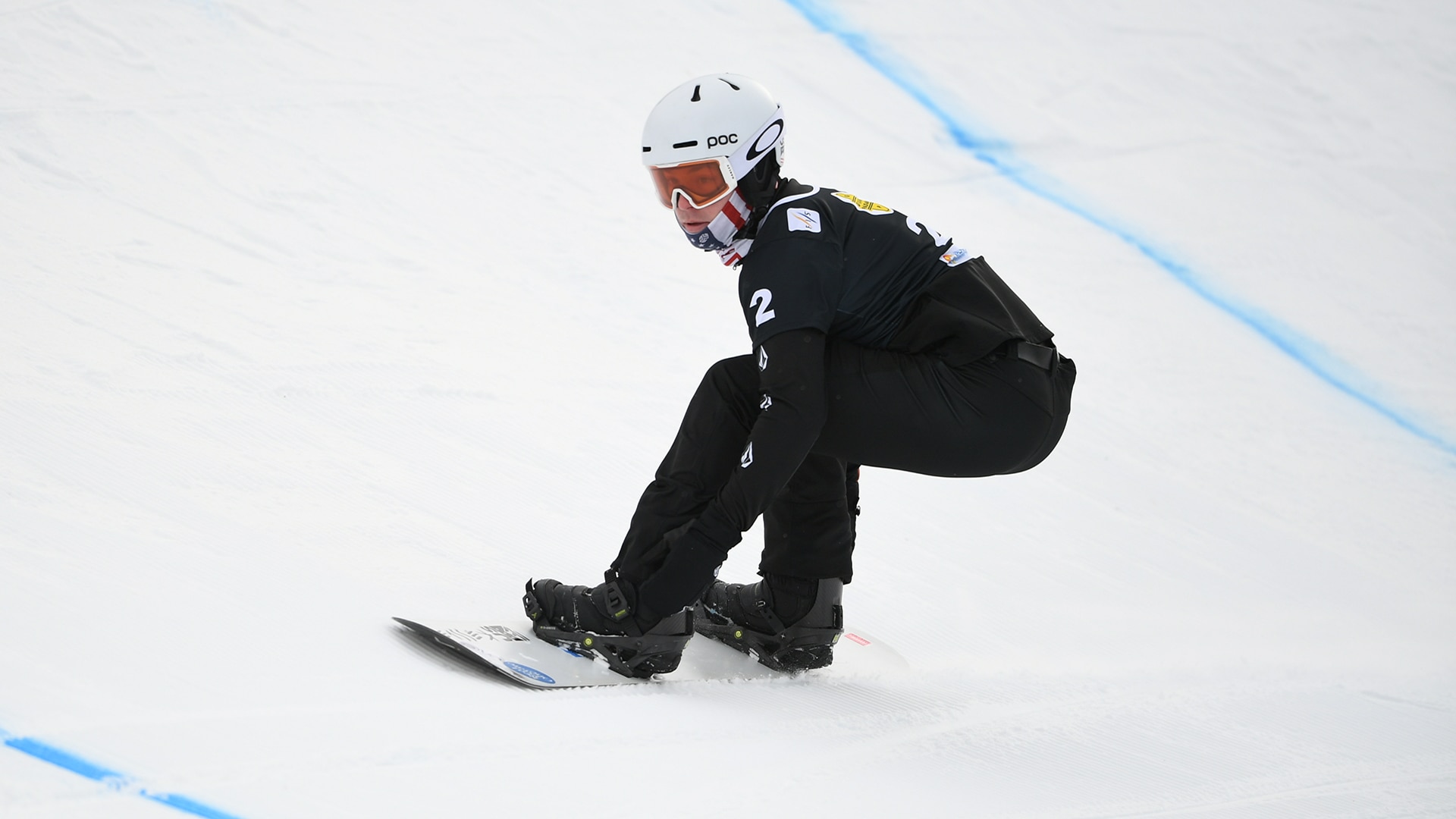 Jake Vedder of the U.S. competes during qualifying of the first and second snowboard cross (SBX) World Cup events in Chiesa in Valmalenco, Italy, on Jan. 22, 2021.
Andrea Diodato/NurPhoto via Getty Images

Burns recorded two top-10 PGS results in early 2020 at Canada's Blue Mountain World Cup, the best of which was fourth, while Winters took 10th in the non-Olympic parallel slalom event this past December at the Bannoye World Cup in Russia. 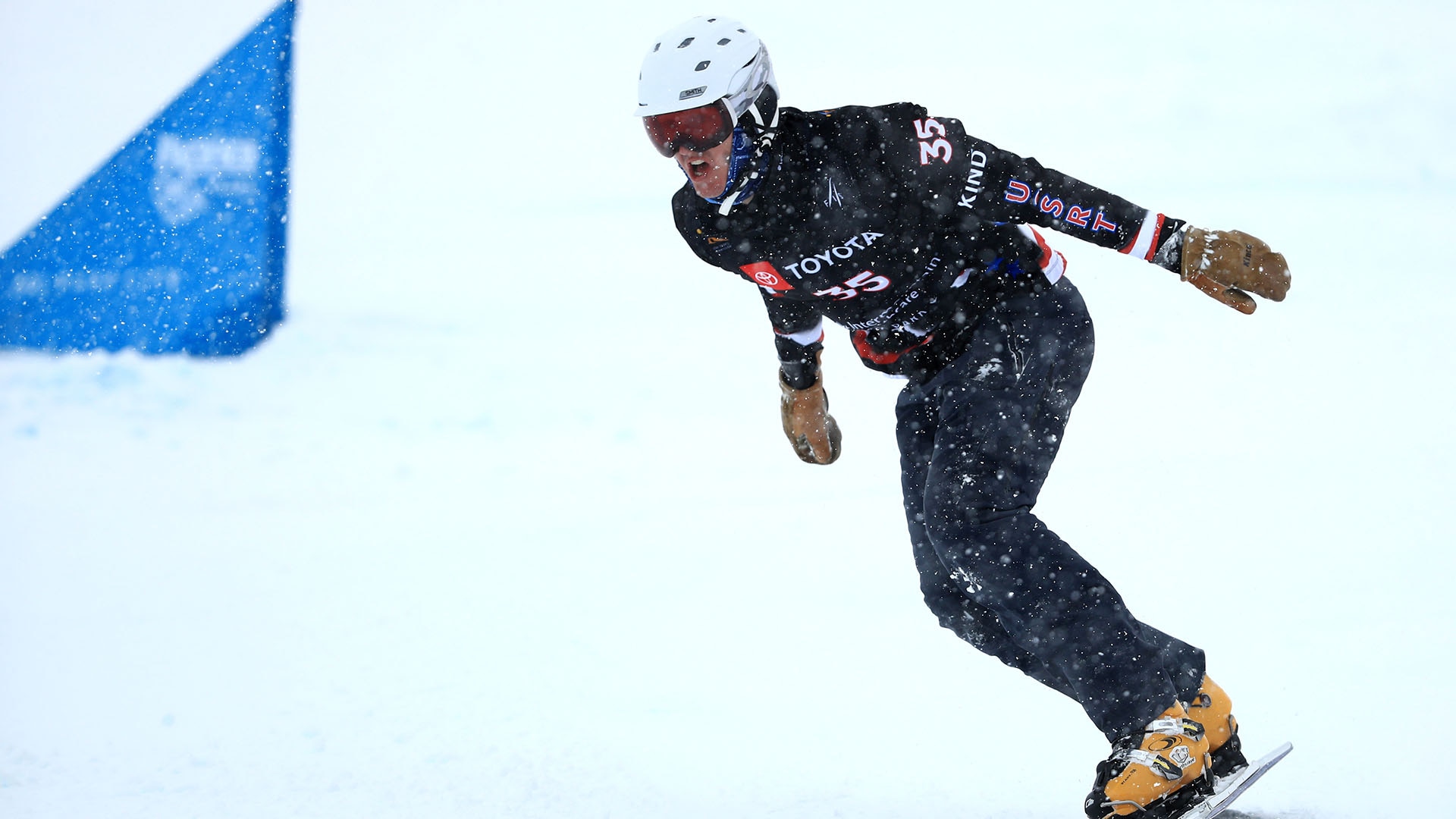 Robert Burns of the U.S. competes in the round of 16 for men's parallel slalom at the FIS Snowboard World Championships on Feb. 5, 2019, at Park City Mountain Resort in Park City, Utah.
Sean M. Haffey/Getty Images 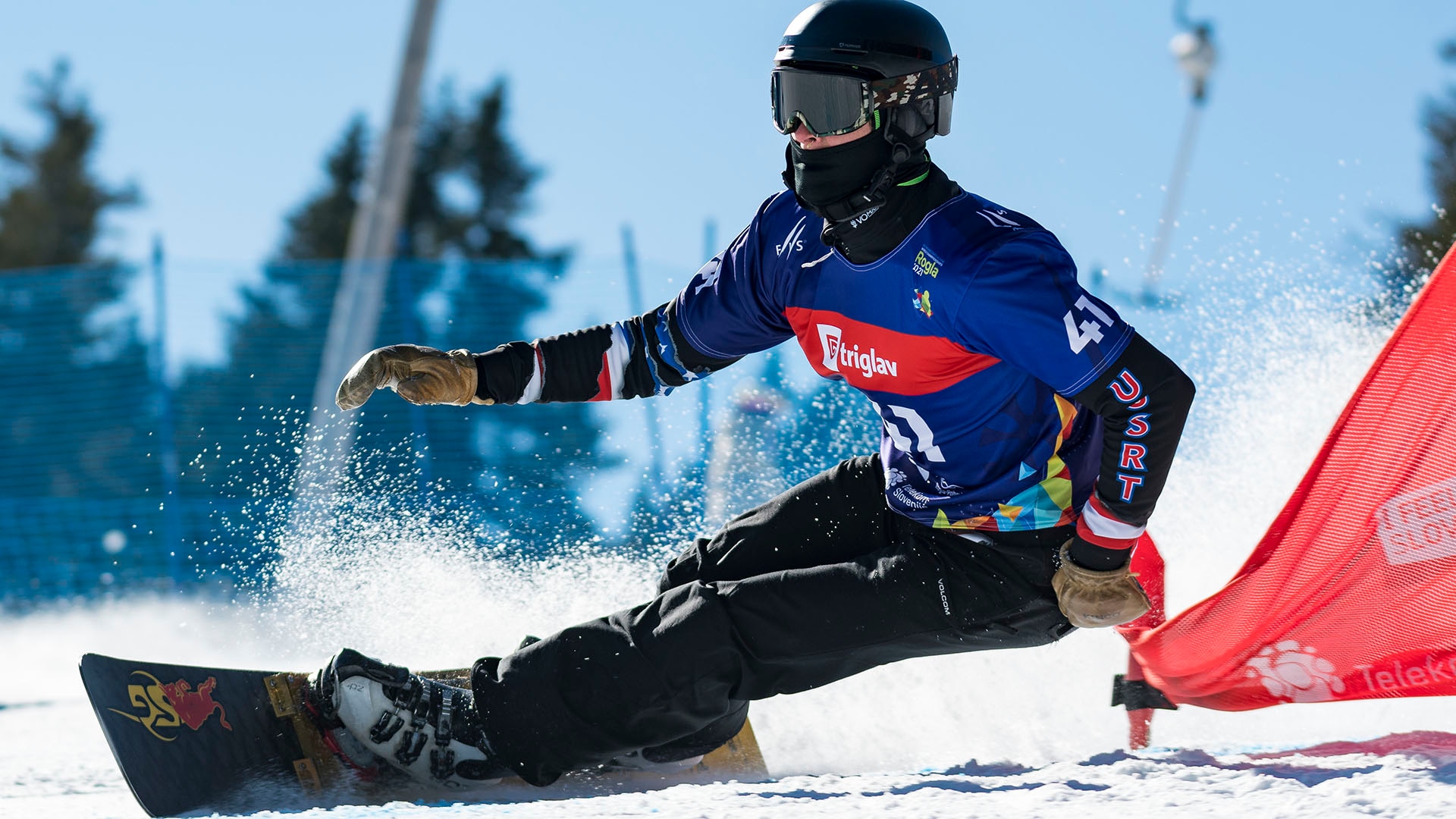 Cody Winters of the U.S. during the men's parallel slalom qualification at the FIS Snowboard Alpine World Championships on March 2, 2021, in Rogla, Slovenia.
Jurij Kodrun/Getty Images

Snowboarding at the 2022 Olympic Winter Games kicks off Saturday, Feb. 5, with women's slopestyle qualifying, and wraps up Thursday, Feb. 15, with the men's big air final. Find the full schedule here, and learn more about the sport here.