ALAMEDA -- What do Joe Flacco, Jacoby Brissett and Chase Daniel have in common? All three are in the "non-elite" category of quarterbacks and all three have been handed defeats by Jon Gruden's Raiders this season.

On the other end are Patrick Mahomes and Aaron Rodgers, two NFL stars that sliced and diced the Silver and Black en route to decisive victories over Gruden's club. The Raiders' third loss -- a trouncing at the hands of Kirk Cousins and the Vikings -- was a perfect avalanche that doesn't fit into either box.

Turn your attention to Week 8 -- the final contest in a five-game road trip that has seen the Raiders go 2-2 and put themselves in the thick of the AFC playoff race -- and you'll see the Texans and otherworldly star quarterback Deshaun Watson.

The Clemson is an elite talent, and when his offensive line isn't making him run for his life, Watson is as lethal as they come. 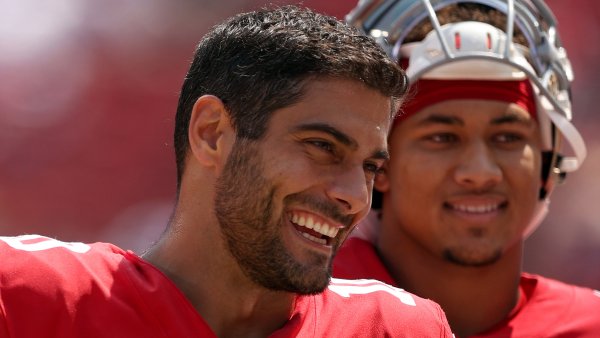 A win Sunday in Houston would give the Raiders a 4-3 record and a 3-2 road trip, sending them back home with momentum for a playoff push. A victory over Watson also would be a big test passed for defensive coordinator Paul Guenther's unit, giving them a first win against the level of quarterback they have been unsuccessful in stopping to date.

"He's an accurate thrower of the ball," Guenther told the media Thursday about Watson. "He can move around the pocket, he's athletic, he understands coverage."

The Raiders have struggled to generate a pass rush this year, and Watson could pick them apart if he's allowed to stand in the pocket with time.

Mahomes threw four touchdowns in a second-quarter barrage in Week 2 that left the Raiders' defense frustrated and stunned. Rodgers was surgical in Week 7, putting up a perfect passer rating while throwing for 429 yards and five scores in the Packers' win at Lambeau Field.

In order to not fall victim to another elite quarterback, the Raiders must do a better job at every level Sunday.

"I just feel like, we know we have to complement each other," edge rusher Clelin Ferrell, who played with Watson for two seasons at Clemson said. "That's the biggest thing, you know what I mean? Guys on the backend got to compliment the D-line, guys on the D-line got to compliment them. Also with the linebackers. Obviously, we have to be able to contain a guy like Deshaun and just be able to put pressure on him and guys just have to cover the receivers good on the back end, not have any miscommunications, stuff like that.

While talented, Watson still is young and prone to making mistakes. After going four straight games without a turnover, Watson has thrown two interceptions in each of the last two games. The importance of the Raiders pressuring Watson and forcing him off his spot can't be overstated, especially with rookie cornerback Trayvon Mullen getting his first career start following the trade of Gareon Conley.

Guenther and the Raiders were unable to fluster Rodgers and it led to a gashing they are still recovering from. Watson has yet to reach supernova status, but he has all the tools to carve the Raiders up in a similar fashion Sunday in the Lone Star State.

The end of a season-defining road trip is here for the Raiders. Now, they just have to find a way to force an elite quarterback out of his comfort zone and into some mistakes.

If they do that, the plane ride home will be a celebration with talk of playoff football for the Silver and Black.