Gwen Berry, 3rd in Hammer at Trials, Turns From Flag During Anthem

Berry said she felt the anthem playing as she stood on the podium felt like a "set-up," while a Track and Field spokesperson said it was part of a pre-published schedule

For the past week, they've played the national anthem one time a night at the U.S. Olympic track and field trials.

On Saturday, the song happened to start while outspoken activist Gwen Berry was standing on the podium after receiving her bronze medal in the hammer throw.

While the music played, Berry placed her left hand on her hip and shuffled her feet. She took a quarter turn, so she was facing the stands, not the flag. Toward the end, she plucked up her black T-shirt with the words “Activist Athlete" emblazoned on the front, and draped it over her head.

“I feel like it was a set-up, and they did it on purpose,” Berry said of the timing of the anthem. “I was pissed, to be honest.”

Berry's reaction to the “Star-Spangled Banner” took its fair share of the spotlight on a blazing-hot second-to-last day at trials that also featured some blazing-fast times.

Gabby Thomas became the second-fastest woman ever in the 200, winning the final in 21.61 seconds. The only woman faster: Florence Griffith-Joyner. And, as expected, Grant Holloway won the 110-meter hurdles, though his time in the semifinals was the eye-opener. His 12.81 was only 0.01 off the world record.

NBC Entertainment reporter Heather Brooker sat down with three-time Olympian Dominique Dawes who produced “Golden: The Journey of USA’s Elite Gymnasts” to find out why she’s shining a light on this sport and these athletes as they compete for a spot at the Tokyo Olympics. “Golden” is streaming now on Peacock TV.

Not winning: Allyson Felix, who finished fifth in the 200, but already had her spot secured in the 400.

Also, Noah Lyles finished second in his 200 semifinal and looked somewhat shocked to see that 17-year-old Erriyon Knighton had beaten him to the line. Knighton finished in 19.88 to top an under-20 world record that had been held by none other than Usain Bolt.

Earlier, with temperatures reaching 101 degrees (38 Celsius) on the field, Berry earned her spot, and her platform at the Tokyo Olympics, grabbing the third spot by a scant 2 inches over Janee Kassanavoid.

Berry has promised to use her position to keep raising awareness about social injustices in her home country. 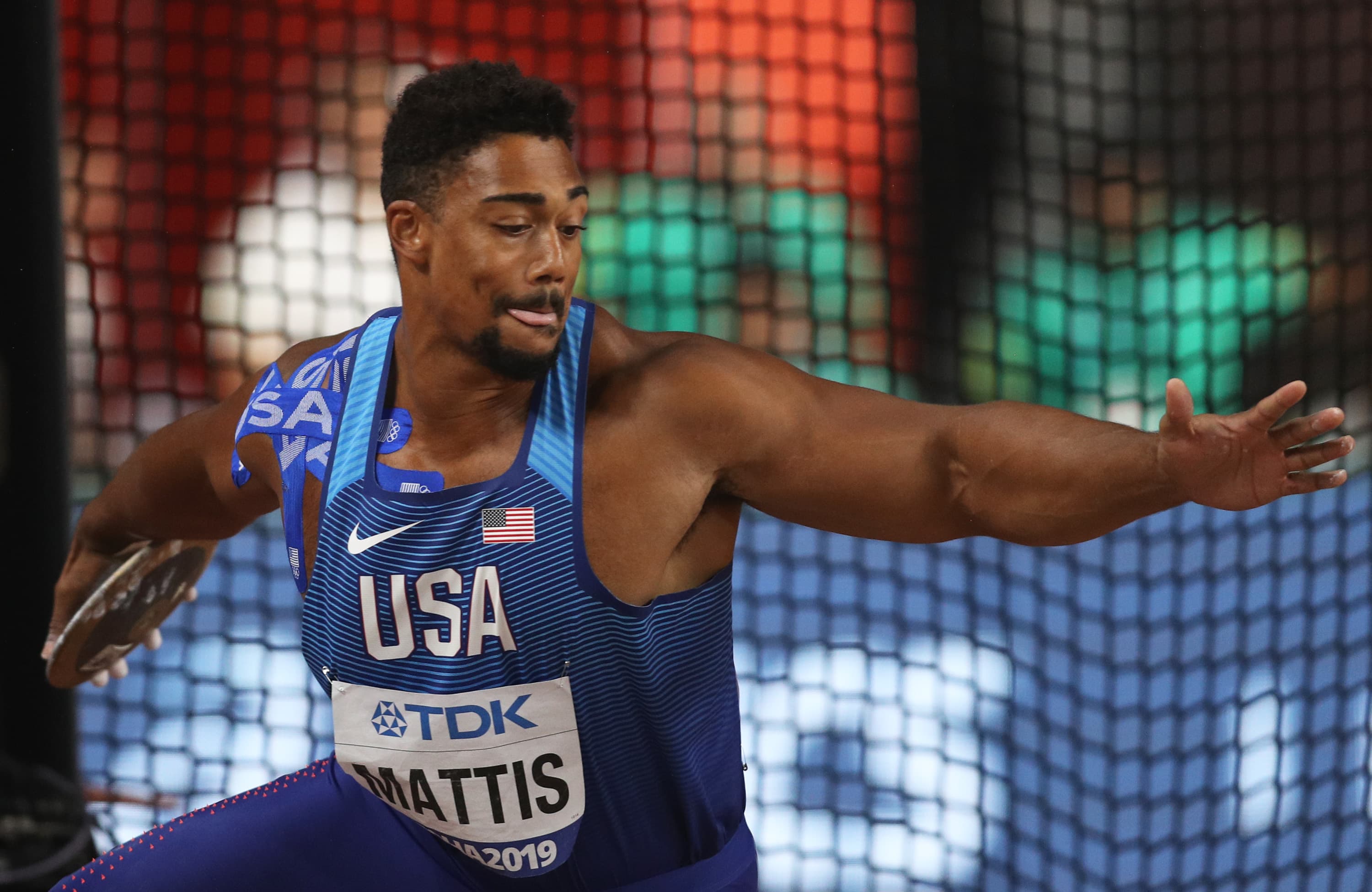 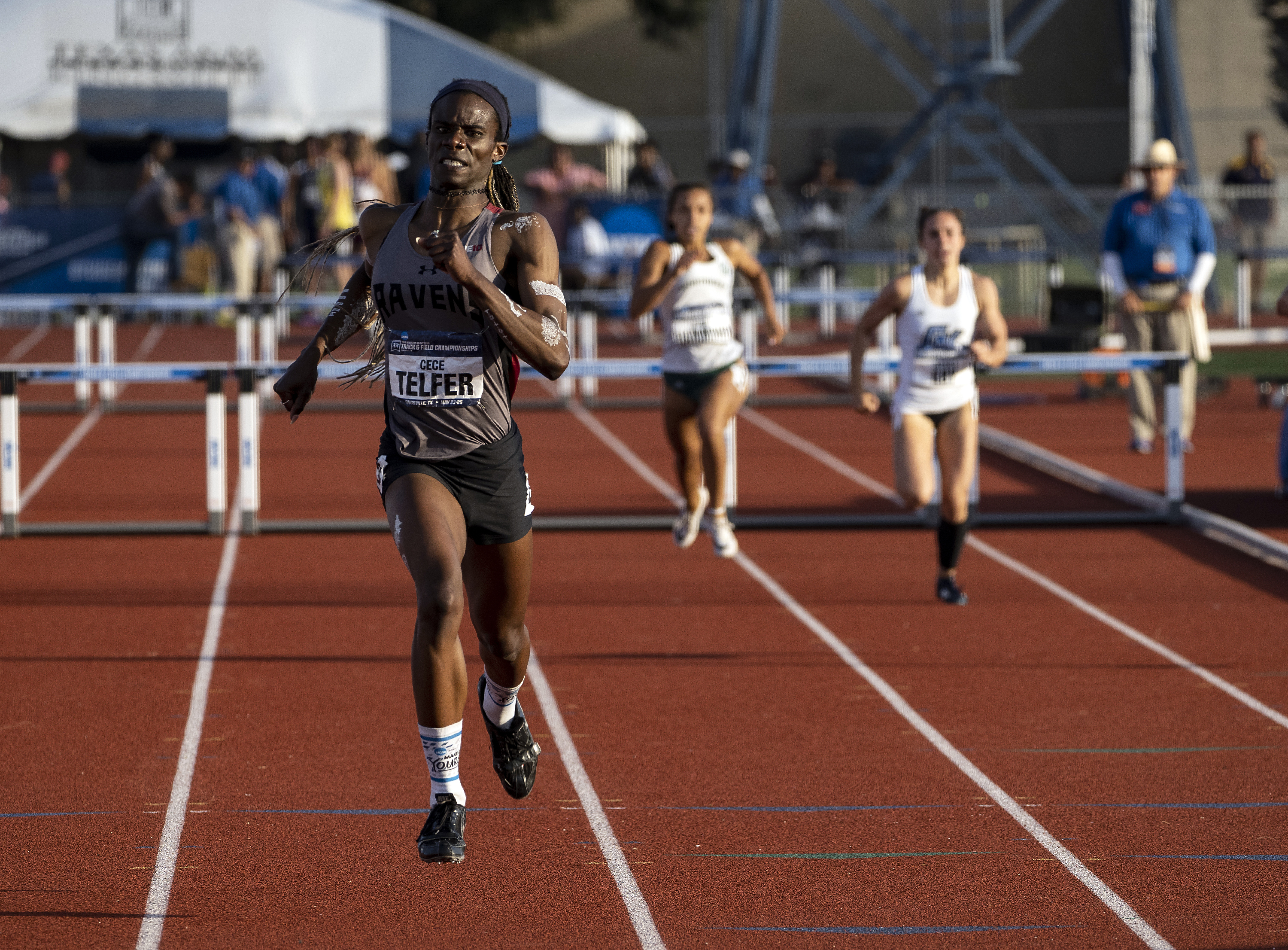 She found it to be no matter of coincidence that she was front and center during the anthem. Unlike the Olympics, they don't play anthems to accompany medals ceremonies at the trials. But the hammer throwers received their awards just before the start of the evening session, which has been kicking off all week with a video rendition of "The Star-Spangled Banner” played on the scoreboard.

USA Track and Field spokeswoman Susan Hazzard said “the national anthem was scheduled to play at 5:20 p.m. today. We didn't wait until the athletes were on the podium for the hammer throw awards. The national anthem is played every day according to a previously published schedule.” On Saturday, the music started at 5:25.

And so, while winner DeAnna Price and second-place finisher Brooke Andersen stood still on the podium with their hands over the hearts and stared straight ahead at the American and Oregon flags, Berry fidgeted and paced on the third step. Then turned away. And finally grabbed her T-shirt.

Louisville, Kentucky student D'Corey Johnson wowed the internet recently with a viral performance of the National Anthem on his school's morning announcements. D'Corey and mom Nakia told us about his influences including Whitney Houston, Tina Turner and Jennifer Hudson before singing for us!

“They said they were going to play it before we walked out, then they played it when we were out there,” Berry said. “But I don't really want to talk about the anthem because that's not important. The anthem doesn't speak for me. It never has.”

Berry's gestures drew virtually no reaction from the still-filling stands. And they were something far less than two summers ago, when she raised her fist on the podium after winning the Pan-Am Games.

That demonstration led to a sanction, but ultimately pushed the U.S. Olympic and Paralympic Committee to commit to not punishing athletes who raise fists or kneel at the trials or in Tokyo. It's a potential flash point for Tokyo, where the IOC has said it will enforce its Rule 50 that bans demonstrations inside the lines. It's the same prohibition that got sprinters Tommie Smith and John Carlos sent home from the Mexico City Games in 1968.

Now, Berry will be heading to her second Olympics, and she saw what it will take to earn anything close to a similar moment in Tokyo.

Olympian Paige McPherson has rituals she performs before her taekwondo matches to help her feel calm and confident. Makeup, skin care and hair care are a big part of that routine. McPherson, who took home the bronze medal from the 2012 London Olympics, joined LX News to explain how her “war paint” ritual has helped boost her self-confidence as she prepares for the Tokyo Olympics.

Price won with a throw of 263 feet, 6 inches (80.31 meters), which was nearly 7 feet longer than Berry's throw. Price, who became only the second woman in history to crack 80 meters, had no problem sharing the stage with Berry.

“I think people should say whatever they want to say. I’m proud of her,” Price said.

She figures to be going for gold along with world-record holder Anita Wlodarczyk of Poland, who is expected to be in Japan. Meanwhile, Andersen's throw was a mere 2 inches shy of Berry's personal best.

Berry said she needs to get “my body right, my mind right and my spirit right” for the Olympics. The women's hammer throw starts Aug. 1.

But she doesn't think she needs to be on the podium in Tokyo to have an impact.

“I don't need to do anything sport-wise,” she said. “What I need to do is speak for my community, to represent my community and to help my community. Because that's more important than sports.”