Backing Up the Talk: Outspoken Lilly King Wins at US Swim Trials

Townley Haas, who finished fifth in the 200 free at the Rio Games, earned a sure spot in the 4x200 free relay

Lilly King always seems to back up her big talk.

King is headed back to the Olympics after a victory in the 100-meter breaststroke at the U.S. swimming trials Tuesday night, ensuring she will have another huge platform in Tokyo to rip into drug cheats and muse on pretty much anything else that pops into her mind.

“It’s kind of what I expected,” King said.

National team newcomer Kieran Smith added a second race to his Tokyo program with a victory in the 200 freestyle, two days after his triumph in the 400 free.

Katie Ledecky cruised through her busiest day of the trials as the top qualifier in a pair of events.

A world record-holder and another of the biggest trials favorites, King powered to the finish of the 100 breast, her head furiously bobbing up and down as she drove to the wall in 1 minute, 4.79 seconds.

The 24-year-old from Evansville, Indiana, got a bit of a challenge from Lydia Jacoby, who locked up the expected second spot on the Olympic team by finishing next in 1:05:28.

This would be Jacoby’s first Olympics.

Olympic swimmer Caeleb Dressel took home two gold medals from Rio in 2016. Dressel explains how his philosophy of being one with his environment helps him excel.

“I was not expecting Lydia to have that incredible race,” King said. “I’m really excited to have a new partner going into Tokyo.”

In addition to her well-documented complaints about doping within the sport, King has boldly predicted the American women are capable of winning every individual event in Tokyo — a comment that will surely stir passions in the expected rivalry with the Australians.

“It’s the same race we’ve always had: USA vs. Australia,” King said. “I know they’re swimming really fast at their trials, but so are we.”

Murphy is going back to the Olympics to defend America’s dominance in the men's backstroke.

The 25-year-old from Jacksonville, Florida, held on to win the 100 back — the first of two spots he hopes to claim in his bid to pull off another backstroke sweep at the Tokyo Games.

Weitzeil originally started swimming as a 9-year-old, and only because her sisters did it. She wasn't a fan of weekend practices, either, and briefly gave up on the sport. Now, Weitzeil is eyeing a ticket to Tokyo.

“I got through it,” Murphy said. “It's really exciting to be going back to another Olympics.”

He won both the 100 and 200 in Rio, extending a U.S. winning streak in the men's events that began after the 1992 Barcelona Games — three years before Murphy was born.

Matt Grevers, who won the 100 back at the 2012 London Games and just missed qualifying for the U.S. team five years ago, failed again in what was surely his final bid to make his third Olympics.

The 36-year-old finished sixth in 53.27. He lingered on the deck for a few extra seconds, acknowledging the cheers of the socially distanced crowd.

The expected second spot on the Olympic team went to Hunter Armstrong (52.48).

Backstroker Ryan Murphy is representing the USA at this year's Olympics in Tokyo. He tells LX News' Jobeth Devera about managing migraines throughout his swimming career, including a time on a flight in 2012 where he hurled on an Auburn coach.

One of the oldest swimmers at the trials, Grevers called it “a changing of the guard.” He can still be proud of a career that included four gold medals and two silvers at the Olympics.

On the women's side, Regan Smith claimed her first Olympic berth in the 100 back.

The 19-year-old from Lakeville, Minnesota, touched first in 58.35, not as fast as her then-record time at the 2019 world championships (57.57), but surely good enough to set her up as one of the gold medal contenders in Tokyo.

“The American backstroke is a powerhouse,” Smith said. “We have so much depth. I knew it was going to be extremely tough to come out on top.”

Rhyan White is also likely to be Tokyo-bound after finishing second in 58.60.

At the 2016 Olympics in Rio de Janeiro, Katie Ledecky established herself as the new face of USA Swimming at 18 years old. Now, she's back following a successful college career at Stanford and is poised to dominate another Olympic games this summer in Tokyo, Japan.

Kieran Smith, who has never even been on the national team (and is no relation to Regan Smith), continued his breakout performance in Omaha.

The 21-year-old native of Ridgefield, Connecticut, who attends the University of Florida, added to his victory in the 400 free with a winning time of 1:45.29 in the 200.

Townley Haas, who finished fifth in the 200 free at the Rio Games, earned a sure spot in the 4x200 free relay and a likely individual race as the second American by taking the runner-up spot in 1:45.66.

Coming off a relatively slow winning time in the 400 freestyle, Ledecky took on her busiest day of the meet with the preliminaries of the 1,500 free and the prelims and semifinals of the 200 free. 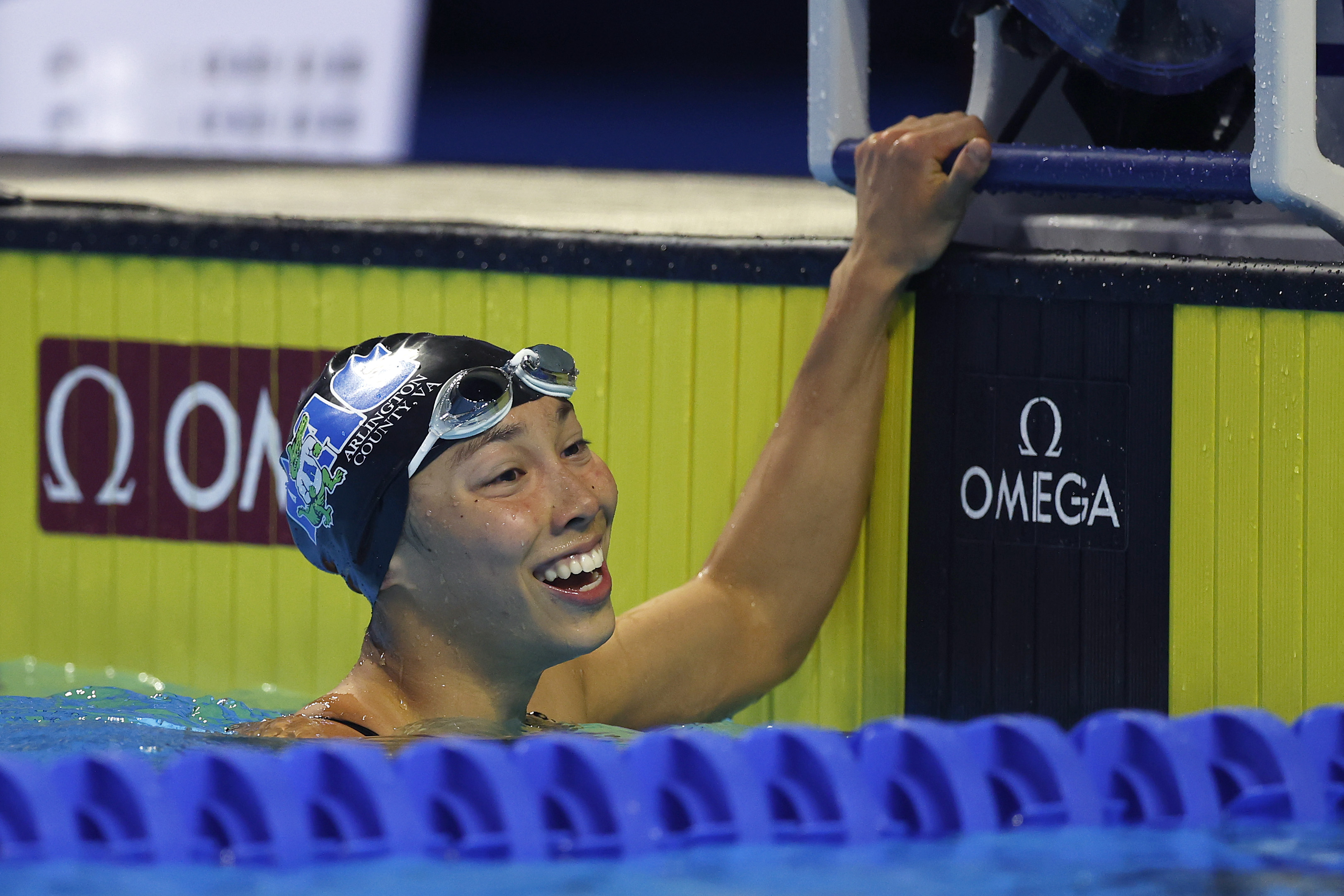 Ledecky was top qualifier in the metric mile in the morning, and came back to post the fastest time in the 200 semis in the evening (1:55.83). She will try to lock up two more races for Tokyo in the finals Wednesday, which are about an hour apart.

“It was a good day,” she said. “Of course, my biggest day of racing from top to bottom. A long day at the office. It was good to get some rest in between.”

Ledecky said she's still adjusting to racing before fans after the coronavirus pandemic shut down the sport and forced the trials and the Olympics to be delayed a year.

“I was a lot more nervous than I expected to be,” she said. “I felt like we went from zero to 100 when it comes to fans. Being in that environment, it just takes some time for me to get used to."

Watch 2020 Olympic sprinter Gabby Thomas talk about how she managed to pursue her athletic career while studying inequities in the health care system at Harvard University in this full video interview from episode 2 of the My New Favorite Olympian podcast.
Copyright AP - Associated Press