When the 49ers invested a third-round pick Friday evening in a running back, it seemed to be a bit of a head-scratcher.

Not only that, non-NFL affiliated draft evaluators seemed to be in agreement that LSU running back Ty Davis-Price was in the 130-range of prospects — not No. 93 overall, where he was selected.

But, now, let’s take a look at the big picture.

Even with a group that consists of four running backs with NFL experience, Davis-Price might end up being the player from the 49ers’ 2022 draft class who makes the biggest impact early in his career.

Here are looks at each of the 49ers’ nine draft picks, ranked in order of their possible impacts for the 2022 season:

Davis-Price played last season around 230 pounds. But he is not just a big, short-yardage back.

He dropped weight to run faster at the combine, but he still exhibited breakaway speed at his heavier game weight.

He rushed for a school-record 287 yards and three touchdowns in a 49-42 victory over Florida in mid-October. Davis-Price is a well-rounded player, including his willingness and ability in pass-protection.

Coach Kyle Shanahan places a lot of emphasis on the running game. Injuries happen. Last season, the 49ers ran short on running backs, which forced Deebo Samuel to regularly line up in the backfield over the final 11 games of the season.

Davis-Price’s presence should enable the 49ers to keep Samuel at wide receiver — except for the occasional jet sweep or gadget play -- and limit the wear and tear of getting carries between the tackles.

Elijah Mitchell was the 49ers’ fifth different leading rusher in the five seasons Shanahan has been the head coach. He took a beating last season and missed six games due to a variety of injuries. Mitchell was hobbled with a knee injury in the postseason that required an offseason procedure.

Davis-Price’s size, skill and durability could lead to him moving ahead of Trey Sermon and Jeff Wilson Jr. on the depth chart and sharing carries with Mitchell early in his rookie season.

With the expected transition to young, strong-armed quarterback Trey Lance, the 49ers have an opportunity to feature more of a deep-passing game. Gray immediately enters the picture as the 49ers’ top deep threat. He was chosen in the third round at No. 105.

Gray can flat-out run, as he showed with his time of 4.33 seconds in the 40-yard dash at the NFL Scouting Combine. He registered the fourth-fastest time of all the wide receivers.

“What I like about Danny, I would say his No. 1 trait was speed,” Shanahan said. “But his No. 2 trait was toughness. And I think that’s a rare quality for those to be one and two, so I definitely like that about him a lot.” 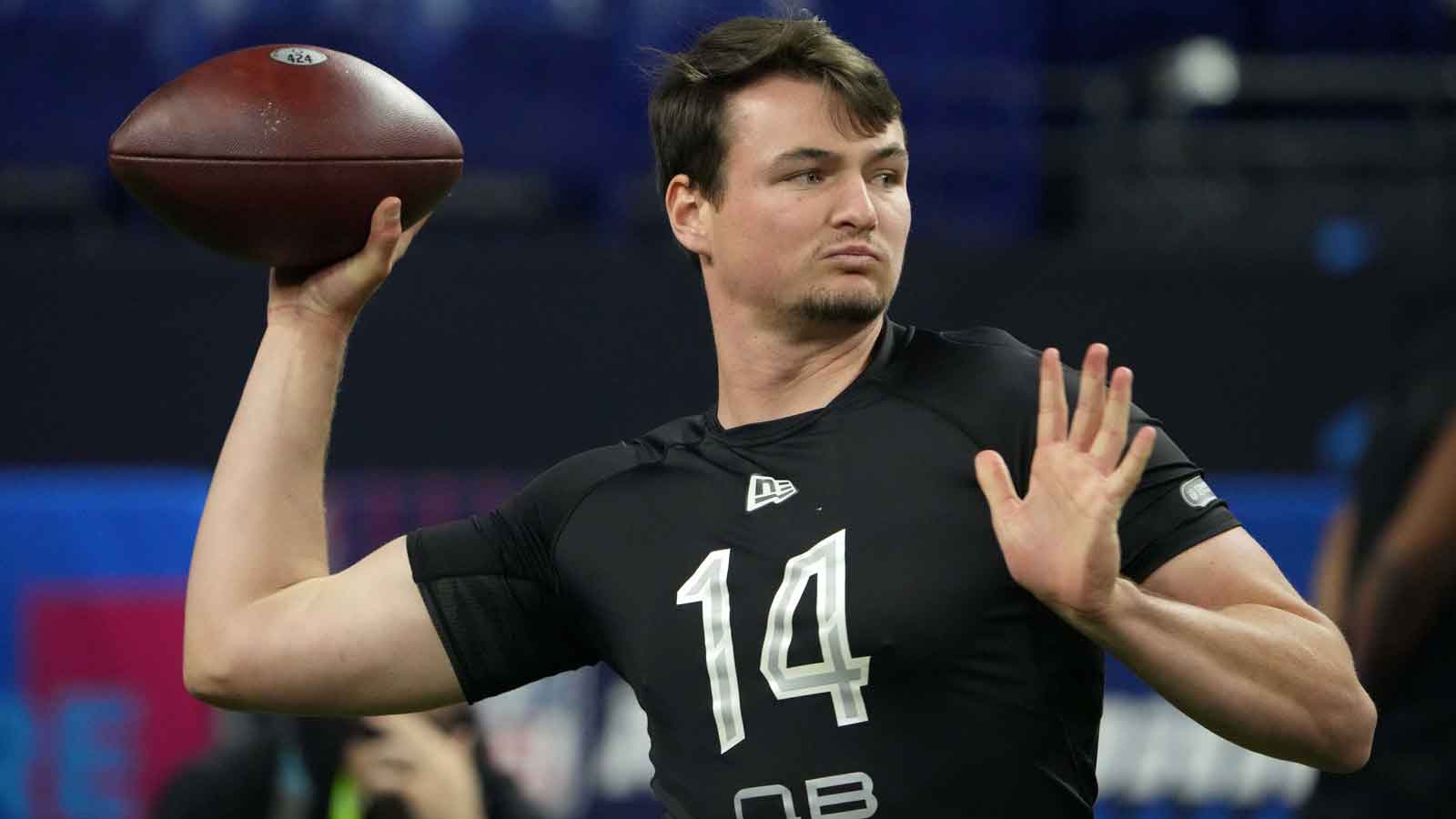 NFL Undrafted Free Agent Signings Tracker: Who Is Headed Where? Womack was not listed high among the non-NFL draft crowd, but the more the 49ers saw him and learned about him, the more they liked him. He was the pick in the fifth round at No. 172.

During the scouting process, 49ers area scout Ryan Kessenich grew quite impressed with Womack and gave him a hearty recommendation. Womack walked-on at Toledo and eventually became a two-time captain.

He has the speed, movement and cover skill that could enable him to compete for and, potentially, win the all-important job at nickel back. The 49ers have an opening at nickel back after K’Waun Williams signed with the Denver Broncos as a free agent.

Womack, whom the 49ers selected in the sixth round, will compete against Deommodore Lenoir, Darquez Dennard and Dontae Johnson for the role.

Jackson became the sixth defensive lineman the 49ers selected with their first pick in the past eight drafts. With no first-round selection, the 49ers scooped up Jackson at No. 61 overall.

Jackson, obviously, has a lot of talent. The 49ers will entrust D-line coach Kris Kocurek to get the most out of him. Jackson will certainly be part of the rotation along the defensive line, where the 49ers are deep with NFL-caliber players.

In 27 college games over three seasons, Jackson registered 12.5 sacks. The 49ers opted for Jackson over Oklahoma’s Nick Bonitto, who had 16 sacks over 21 games the past two seasons.

Jackson should get better and better over the course of his initial four-year contract. As a rookie, it will be difficult for him to win a spot on the field for the most-important snaps of the game opposite Nick Bosa.

If Jackson plays well enough to beat out the veterans and win his way onto the field for crucial snaps as a rookie, that will be a huge bonus for DeMeco Ryans' defense.

The 49ers evaluated Castro-Fields over the past three seasons because they thought there was a chance he would declare early for the NFL draft.

“He’s played a lot of football at a high level,” said Tariq Ahmad, the 49ers’ director of college scouting.

With his size (6-1, 197) athleticism, intelligence and work habits, Castro-Fields enters the picture much further along than most cornerbacks selected on Day 3 of the draft. The 49ers picked him in the sixth round at No. 221.

He will not immediately compete for a starting job, but he can make a Year 1 contribution on special teams.

He will report to the 49ers behind Charvarius Ward, Emmanuel Moseley and Ambry Thomas on the depth chart. Castro-Fields can work his way into a position where he is called upon as a reserve.

Zakelj is a player Ahmad has been keeping tabs on for four years, since visiting Fordham during Zakelj’s freshman season to scout another player. The 49ers selected him in the sixth round at No. 187.

At 6-foot-6, 316 pounds, Zakelj figures to compete for a role as an interior offensive lineman. And with the 49ers considered thin at the center position, he has an opportunity to fill a need at wherever he might be most needed.

The 49ers kept close tabs on Zakelj at the Senior Bowl, where he was moved to guard and got off to a slow start, 49ers assistant general manager Adam Peters said.

“But as the week went on he got better and better, and in the game he was really good,” Peters said. “We think he has the skills with the quickness and intelligence to play both guard and center.”

The 49ers thought there was a chance Burford would be chosen in the third round. He was still there when the 49ers selected at No. 134 overall in the fourth round.

“The athleticism stands out right away,” Ahmad said. “Great practice habits. He practices extremely hard. You see all that natural athleticism. It was easy for everyone to get on board once they saw him.

Burford figures to bump inside to guard to compete for a role. The 49ers will have at least one new starter on the interior offensive line after Laken Tomlinson signed with the New York Jets as a free agent.

The 49ers expect Aaron Banks, a second-round pick last season, to earn one starting job. Daniel Brunskill started every game at right guard last season after splitting time at guard and center in 2020. The 49ers also plan to allow second-year player Jaylon Moore to compete at guard this year, too.

The 49ers envision Burford as a player who can easily develop into a starter down the road. But it might be too much to ask him to win playing time as a rookie.

There is a lot to like about Davis, beginning with the person. The 49ers were drawn to him throughout the process and decided he was worth the investment of a sixth-round pick at No. 220 overall.

Davis sustained a torn ACL in October, and he is likely to enter training camp on the physically-unable-to-perform list. With their depth along the defensive line, there is no rush for the 49ers to get Davis on the field.

At 6-2, 310, the 49ers are reminded of D.J. Jones, who left the club this offseason as a free agent. Davis has similar explosiveness at the snap of the ball with his ability to penetrate between the center and guards.

His contributions as a rookie might be minimal, but he should eventually work his way into a starting job.

The 49ers had to add a quarterback to their 90-man roster, so they saved that call until the end of Day 3. Purdy was chosen in the seventh round with the No. 262 and final selection in the 2022 NFL Draft.

Purdy joins a quarterback room that, for sure, will consist of Trey Lance and Nate Sudfeld. The status of Jimmy Garoppolo remains unknown. Garoppolo is nearly two months into an expected four-month rehab from shoulder surgery, and the 49ers would like to trade him.

RELATED: 'Mr. Irrelevant' Purdy looks to have impact with 49ers

Purdy has a good chance to remain with the 49ers the entire season, though his best shot is to stick on the practice squad. He started 46 games in four college seasons. The 49ers were drawn to him because of his experience, smarts and decision-making.

Shanahan compared Purdy to former 49ers quarterback Nick Mullens, who spent his rookie season on the practice squad before eventually beating out C.J. Beathard for the No. 2 job and starting 16 games over three seasons.