After four straight losses, Kyle Shanahan already is facing questions he hoped to avoid during the 49ers' 2021 season.

At 2-4, the 49ers are in third place in the NFC West and already are out of the division race with the Arizona Cardinals at 7-0 and the Los Angeles Rams right behind them at 6-1. With the 49ers' season teetering, the rumbles for rookie quarterback Trey Lance should replace Jimmy Garoppolo are getting louder.

Inserting Lance as the starting quarterback might give the 49ers a better chance to win in 2021, but that depends on how quickly the rookie develops and how he meshes with Shanahan. But giving Lance 11 games to start certainly would give him important experience that will help him grow into a better quarterback down the road.

But Shanahan announced Monday that Garoppolo would remain the starter for the 49ers' Week 8 trip to Chicago to face the 3-4 Bears and that he doesn't think the 49ers are in a place to start Lance just for the sake of Sunday reps.

“I think you're asking, when do you start playing people just for experience?" Shanahan said Monday. "And when you're playing people just to get them experience, you start to do that when you're completely eliminated from playoffs. If you're doing it for other reasons, then you do that when you feel a person's ready. Our record is 2-4, so I get it, and we've lost four in a row. So I get why I'm getting questions like that. But we're 2-4, you get two games in a row and you're right back to .500 and you’ve got a chance.

"I remember 10 years ago, I was on a Bye Week at 3-6 and it felt like the world was falling apart and we were last place in the division. And we finished the year 10-6 and ended up winning the division and going into the playoffs. So I get all the questions, but it's way too early for me to start thinking about just getting guys experience and giving up on the year in that way. I'm trying to do what's best for our team. And also what's best for those players, not just Trey, but other guys. Getting experience just to get it isn't always beneficial.” 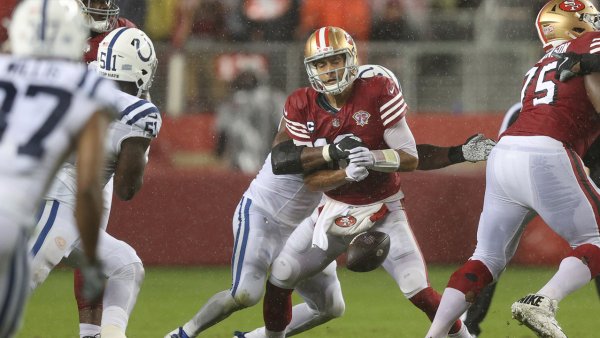 Lance has played in four games so far this season for the 49ers. The North Dakota State product saw brief action in Weeks 1 and 3 before taking over for an injured Garoppolo at halftime of the 49ers' Week 4 loss to the Seattle Seahawks. Lance made his first career start in Week 5, a 17-10 loss to the Cardinals.

The rookie signal-caller suffered a knee sprain in Week 5 and was inactive for the 49ers' Week 7 loss to the Indianapolis Colts on Sunday.

Garoppolo returned from his calf injury to start against the Colts and didn't have many good moments during a game that played in a deluge at Levi's Stadium.

Still, Shanahan noted Monday that one bad game does not mean Garoppolo is getting the hook.

"We didn't go into that game thinking that Jimmy was one bad game away from losing his job or anything like that," Shanahan said in a Monday in a conference call with Bay Area reporters.

"Jimmy didn't play as good as he could, which he knows that and I know that. I think there were some pretty hard circumstances for him -- for both quarterbacks, considering some of the weather. But I definitely thought he could play better."

The 49ers will hope Garoppolo can elevate his game and lead them to a win Sunday in Chicago or else their playoff hopes will be on life support at 2-5.