What we learned as Giants win wacky game vs. Angels in extras originally appeared on NBC Sports Bayarea

Kevin Gausman against Shohei Ohtani might have been the matchup of the year in MLB so far, and both pitchers lived up to the hype. But they were not the story of Wednesday's game. Not even close.

In a messy, bizarre, 13-inning game, the Giants prevailed 9-3 against an LA Angels club that ran out of players in extra innings. The Giants struck out 19 times and went 3-for-19 with runners in scoring position, but the Angels were punchless on the other side, and the Giants won it with a wild rally in the 13th. They scored the go-ahead run on a bases-loaded walk and then tacked on three more on a wild pitch and infield single.

race for a vaccine Jun 23 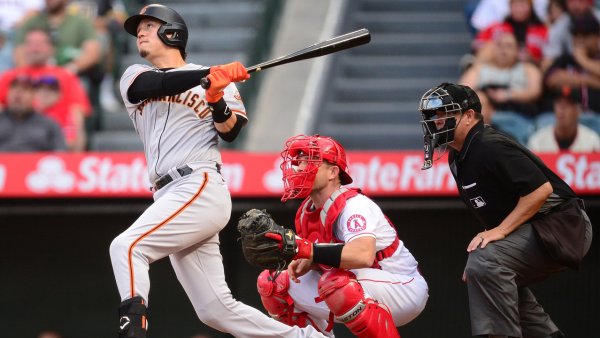 The inning continued for Mike Tauchman, who struck out in his first five at-bats. Tauchman was one strike away from becoming the first Giant to strike out six times and helping the lineup tie a franchise record, but he crushed a three-run homer to right.

All of this happened after about an hour during which the Giants should have lost multiple times.

Neither team had many opportunities through nine. The Giants got a free baserunner on second to start the top of the 10th, but Angels closer Raisel Iglesias struck out the side. The Angels immediately pushed their free runner to third with a bunt and a couple of walks by Zack Littell -- one intentional -- loaded the bases for Max Stassi. He twice swung and missed at ball four for the second out, and Anthony Rendon followed with a hard grounder that bounced off Littell and right to Darin Ruf, getting the Giants out of the inning.

Neither team scored in the 11th, but Steven Duggar put the Giants on top in the 12th with a double, snapping an 0-for-11 the Giants had going with a runner in scoring position. The Angels at that point had an emergency catcher behind the plate and a pitcher in left field, but the Giants couldn't add on. Mike Tauchman ended the inning with his fifth strikeout.

The Angels tied it up in the bottom of the inning and put the winning run on third when Juan Lagares alertly took a second bag on an infield single. Lagares raced home on a grounder to first and appeared to score the winning run, but replay overturned a bang-bang play.

That led to the fireworks in the 13th. It was all very weird. Here are three things to know from the first nine innings, which were normal:

Lived Up To The Hype

Ohtani allowed six hits, one run and struck out nine. He was his usual dominant self, but the Giants forced him to throw 24 pitches in the first inning and kept pressuring him. Ohtani was at 69 pitches through four shutout innings, but he ended up getting through six, throwing 105 pitches. That was the second-highest total of his career and highest since he had Tommy John surgery in 2019, but he didn't seem to be running out of gas. His final pitch was a 97 mph fastball that blew Mauricio Dubon away.

Ohtani gave up a run in the fifth, but that might have been his most impressive stretch. With two runners on, Ohtani dialed it up to 99 mph for the Brandons and got a couple of strikeouts to escape the jam.

Gausman also struck out nine, although he went one additional inning. He allowed a solo homer to Luis Rengifo but nothing else, lowering his ERA to 1.49. Gausman threw an astounding 49 splitters and got 18 swinging strikes, the most since tracking began. He twice struck out Ohtani while feeding him a steady stream of splitters.

Alex Dickerson made his first start since June 8 and had one of the better days anyone has ever had against Ohtani. He became the first player to get three hits off him in one game, picking up two singles and a 112-mph double.

Dickerson and George Springer (four hits including a homer) are the only two big leaguers with more than two hits off Ohtani, and Springer has done it in three matchups.

What made Dickerson's day particularly impressive is the fact that he picked up hits on three different pitches: a splitter, curveball and cutter. Dickerson was starting to heat up before he went on the IL with a back strain and it appears the time off didn't rob him of his timing.

Ohtani had a shutout going into the fifth, but he did hang a few pitches in those early innings. Mike Yastrzemski finally took advantage with one out in the fifth. Yastrzemski got a cutter right over the heart of the plate and crushed a high drive to right, getting the Giants on the board.

The homer was Yastrzemski's 10th, giving the Giants four players in double-digits. Yastrzemski joins Brandon Crawford (16), Buster Posey (12) and Brandon Belt (11). Led by those four, the Giants now have 111 homers on the season, the most in the big leagues.