The 49ers appear to have dodged a bullet as it pertains to the groin injury Deebo Samuel suffered Sunday in the win vs. the Minnesota Vikings. The injury is not expected to be a long-term ailment, but Samuel will miss the 49ers' Week 13 game vs. the Seattle Seahawks, and the third-year wide receiver will be week-to-week going forward.

Not having No. 19 on the field means the entire 49ers' offense must elevate its game, but that's a task head coach Kyle Shanahan believes they are well-equipped to handle.

“He's been a big part of our offense, but I think we're in a spot right now that we can overcome that," Shanahan said Monday when asked about adjusting the offense without Samuel. "[TE George] Kittle came in yesterday and made a huge play. [WR Brandon] Aiyuk's been stepping it up each week, doing better. You guys see [WR] Jauan [Jennings] coming along. I’d love to give [WR] Travis Benjamin more opportunities anyways, having his speed out there. Kittle’s getting healthier and better each week. And our run game has been doing well too.”

RELATED: Where 49ers sit in NFL power rankings after win vs. Vikings 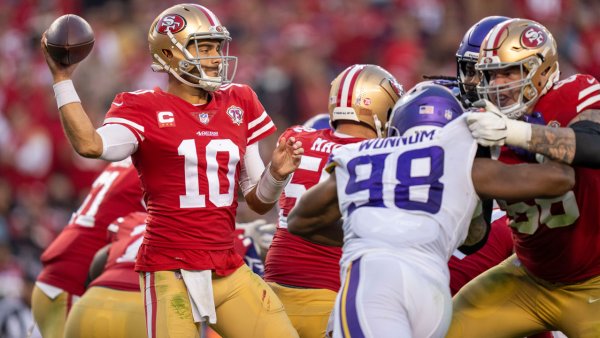 With Kittle injured and Aiyuk in the dog house early in the season, the 49ers' offense had to lean heavily on Samuel to keep them afloat while Shanahan found a play-calling rhythm and quarterback Jimmy Garoppolos steadied himself.

While Kittle has returned and Aiyuk has re-emerged of late, it's the success of the 49ers' running game that has keyed their current three-game winning streak that has vaulted them back into playoff contention.

The 49ers will face the Seahawks on Sunday. The 7-4 Cincinnati Bengals loom after that. Shanahan and the 49ers' offense can survive Samuel's absence in the short term, but there is no question they need the electric wide receiver back as soon as possible.