If it wasn't for Damion Lee, the Warriors would have likely suffered their first loss of the season Tuesday night.

Lee's performance off the bench (20 points in 25 minutes) helped Golden State squeak out its fourth-straight win of the season, and avoid a loss to the lowly Oklahoma City Thunder.

Lee's early success from this season has carried over from last season, where he began to make strides on the court before missing the Warriors' 16 remaining games due to a bout with Covid-19.

Warriors coach Steve Kerr joined 95.7 The Game's Damon & Ratto where he discussed Lee's progress on the court, and when he believes the fifth-year guard turned the corner in his career.

“I thought he turned the corner last year," Kerr said. "He had some really good games for us a year ago. The season didn’t end well for him, he got Covid late in the year and was not able to play in the two play-in games. He didn’t really have a complete season health-wise, but he really helped us win some games. This was a great summer for him, he got healthy, was able to work on his body. I think he came into camp in the best shape of his life, but also with the most knowledge that he’s ever had and the most confidence."

Lee, who is newly married to Curry's younger sister Sydel Curry-Lee, is expecting a baby with his new wife. Kerr believes the positives in Damion's life have directly impacted his play on the court, something he believes plays a role in Curry's life as well. 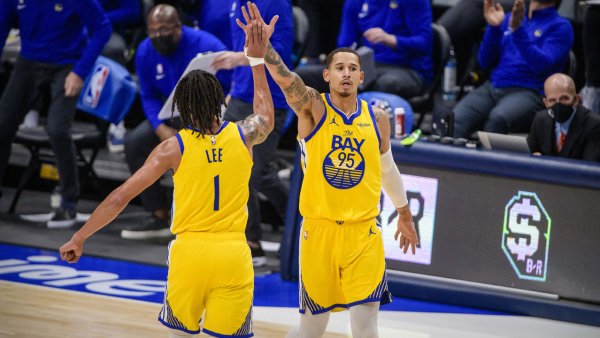 RELATED: How Lee set himself up to have big season with Warriors

“He and Sydel, his wife, are having a baby too," Kerr said. "There’s just a lot of great things going on in Damion’s life. He’s just right at that sweet spot where he’s ready to help (I think) a good team win a lot of games. You saw that last night, and you saw that in all four of these wins that we’ve had to start the year.”

“They are directly related, there’s no question. I’ve long felt that’s one of Steph [Curry’s] secrets to his success, he loves his life. He loves his family, he loves his hobbies, his daily existence on the Earth, he just enjoys it so much. He’s got so much going for him that it makes everything smoother and more fun for him on the court. I think that’s true for everybody. If you can get things in order and you’re in a comfortable place, you’re going to have more success.”

Happiness off the court is an important factor towards any success a player might experience on the court, and it appears that Lee has a lot to be happy about right now.