We know what the 49ers gave up to acquire quarterback Jimmy Garoppolo in the middle of the 2017 season.

That might be the question the 49ers ask themselves in the coming weeks or months — if another NFL team prefers to have Garoppolo over anyone currently on their quarterback depth chart.

The best indicator of what he might be worth on the trade market is to compare Garoppolo to Garoppolo.

The rest of the football world was surprised that all New England Patriots coach Bill Belichick requested from the 49ers was a second-round draft pick at the trading deadline in 2017. 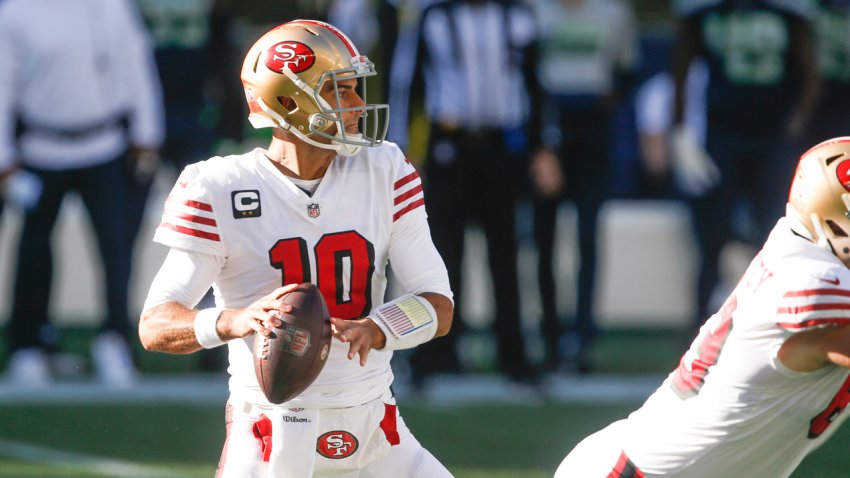 The 49ers were 0-8 at the time and were heading toward the No. 1 overall pick. Then, Garoppolo learned enough of the 49ers’ offense to prompt his move into the starting lineup.

The 49ers finished the season with five consecutive victories, and the Patriots’ return for Garoppolo turned into the No. 43 overall pick of the 2018 draft.

Now, Garoppolo is 3 1/2 years older and has 33 more starts, including the playoffs.

At the time of the trade, he was signed only through the remainder of the season. But his encouraging play led the 49ers to sign him to a five-year, $137.5 million contract in the offseason.

Any team that would make a trade for Garoppolo before the start of the 2021 season would have him under contract for the next two seasons with base salaries and bonuses totaling $25.5 million and $25.6 million.

Two teams that have been speculated as having interest in Garoppolo are the Patriots and his hometown Chicago Bears. New England’s second-round pick is the No. 46 overall pick, while the Bears own No. 52.

But the 49ers have sent the signal they plan to hold onto Garoppolo.

General manager John Lynch and coach Kyle Shanahan articulated the belief that the organization can win this season and Garoppolo gives them a better chance than any rookie.

But their minds could change once they get to work with the young quarterback. If they believe the quarterback the 49ers select at No. 3 overall is ready, then they will be more apt to make a trade.

If it is close, the 49ers should be more willing to deal Garoppolo and avoid paying his salary. That money saved can be devoted to future big contracts for some of their other players, such as Fred Warner, Nick Bosa and Deebo Samuel.

The other most-relevant quarterback trade occurred early in the 2018 offseason. And it is the situation that most-closely resembles the 49ers’ plan for the upcoming year.

The Kansas City Chiefs traded up to select Patrick Mahomes at No. 10 overall. But coach Andy Reid decided to stick with Alex Smith one more season while developing Mahomes behind the scenes.

Smith had a career year, while Mahomes was impressive in one late-season start.

Smith was 34 and had started 151 games when he was traded to Washington. He had one year remaining on his contract, and Washington immediately signed him to a new, lucrative contract.Garoppolo is 29, and has nowhere near the experience of Smith.

If the 49ers were to get a similar price for Garoppolo with the Patriots, one scenario would be for them to acquire defensive end Chase Winovich, who was chosen with a third-round pick in 2019, and a third-round draft pick (No. 96 overall).

RELATED: How Jimmy G reacted when Shanahan explained trade for No. 3 pick

From the Bears, a deal for Garoppolo could net them 2019 third-rounder David Montgomery, a pass-catching running back who fits Shanahan’s scheme, and the No. 83 overall pick.

The 49ers would almost certainly be open to considering any trade involving Garoppolo -- if the price is right.

It is a matter of determining how much Shanahan and Lynch believe Garoppolo can still help them before the sides inevitably part ways.