What 49ers Must Fix, Improve to Get Back Into NFC Playoff Race

The 49ers emerged from their bye week slightly higher in the NFC West standings than when they entered it, but at 2-3, there's a tall task that lies ahead if they hope to rebound from their slow start and qualify for the playoffs.

After two straight victories to begin the season, San Francisco has lost three in a row. However, all three losses came in one-score games, suggesting perhaps that the 49ers' situation isn't as dire as it appears to be heading into Sunday night's game against the Indianapolis Colts. That said, they know they must improve in multiple areas, and do so quickly.

"We've got to get more turnovers on defense, have to be better in the red zone there," coach Kyle Shanahan said Wednesday. "On offense, I think we have to be much better in situational football. We have to be much better throwing and catching. I'd like to generate a few more explosive runs. I think we're running the ball somewhat decent, but if you don't get big runs you're never going to have those numbers. And then it just comes down to execution in some real critical situations."

Certainly, injuries have played a big role, but the 49ers have still managed to be in every game. Quarterback Jimmy Garoppolo believes it's only a matter of stringing some long drives together before they find their groove.

"But when we go three-and-out and we get off the field quick, it just puts our whole team in a bad situation. You know, that's the complementary football that we've played in the past here. That's when we play our best and when we kind of lap teams and turn one score into two real quick. I think if we can get back to that we’ll be in a good spot." 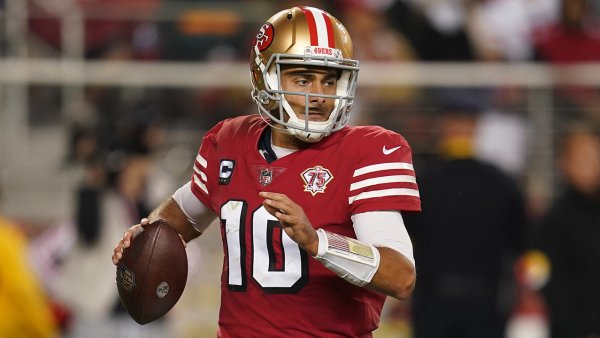 RELATED: Jimmy G back at practice; Lance unlikely to play vs. Colts

Sunday night presents the 49ers with an opportunity to remind the rest of the NFC that they plan to be a factor in the playoff race. If they get back to playing complementary football, they just might be impossible to ignore.