The Invisible Crowd: Inside the NFL's Fake Crowd Noise System

There are no fans at Levi's Stadium this season, but when the 49ers score a touchdown, you'll hear 70,000 of them cheering on TV

During a game, he's thinking about the sound of the announcers' voices, when to play the iconic theme music, what players are doing on the field and what coaches are yelling from the sidelines. But there's one thing he's never had to give much thought: the crowd.

"We just fill up the stadium with 70,000 people, and we have mics in the crowd, and they do their thing," said Stevens, who's the lead audio mixer for NBC's Sunday Night Football. "It's loud when their team is doing great, and it's quiet when there's nothing going on."

But with the 2020 NFL season now underway in the midst of the global coronavirus pandemic, all of that has changed. Many games, including those at Levi's Stadium, where the 49ers play, are happening with no fans in the stands.

Fred Gaudelli, Sunday Night Football's executive producer, had been watching sporting events from around the world over the summer, many of them played in empty stadiums.

"It gets really dull quickly," Gaudelli said. "I mean, there's just no energy."

As he wondered how his team would bring excitement to viewers watching at home, Gaudelli said he got a call from a friend at NFL Films that changed everything.

"They called me and said, 'You know, we have curated audio from every single stadium in the National Football League,'" he recalled. "'Do you think we could do anything with that?' And I said, 'Yeah!'"

In what amounts to a fortuitous coincidence, NFL Films had just wrapped up a multi-year project making high-quality surround audio recordings of the crowd at home games of each of the league's 32 teams.

"We were just doing it to capture sounds for our library, that we use in our shows," said Vince Caputo, NFL Films' supervising sound mixer.

Consulting with experts at the Conservatory of Recording Arts and Sciences, Caputo's team set about slicing up the recordings into small samples of pure, uninterrupted cheering that could be made into a sort of playable musical instrument that produces crowd sounds on demand.

"We didn't realize how ambitious it was, because if you listen to an NFL game, there are a lot of other sounds in the stadium besides the crowd — and none of those sounds could be part of our project," Caputo said. "What was left was a whole bunch of small pieces of things. Some were ambiance, some were reactions, some were boos, some were applause, some were high reactions — positive, negative — and then we just started separating them into categories."

The result was a system — actually, 32 different systems — running on a Windows laptop with a small handheld controller. The software, called Audiokinetic Wwise, comes from the video game industry. The controller, a Korg NanoKontrol, comes from the music world. Using two faders and a small cluster of buttons, an operator can use just a few fingers to cheer (or boo) on behalf of 70,000 fans while watching the game unfold.

"We made these pools of sounds for the things that will loop, like ambiances, and also the very specific types of reactions," Caputo said. "So we took all of what we call 'Yes-Low,' which is kind of the lowest degree of positive reaction, and put all of those similar reactions into a bank. And when you press the Yes-Low button, it reaches into that bank and randomly selects one."

The banks of sounds are specific to each team — and so are the operators. Audio engineers by training, they're also generally true fans of their home teams, with years of knowledge about how the stadium sounds during a sold-out game. In some cases, they're able to operate from inside the stadium bowl, overlooking the game.

Caputo walked through the procedure step by step, starting with the ambiance fader on the far right edge of the controller. It's a 4-position switch, with level 1 being the chatter of a crowd between plays, and level 4 being a loud, raucous crowd trying to distract the visiting team's offense. The fader in the middle of the controller, called the "peak fader," controls the building excitement during a play.

"Before the play starts, you'd be in level 1," he explained. "49ers come out to the line of scrimmage ... you can move it up to level 2, to let the excitement build just kind of a little bit and get the crowd a little more into it. When they take the snap, you would start kind of easing up this, what we call the peak fader, to build a little excitement as the play starts. And then fire a reaction if something big happens, and then you can kind of taper down that positive reaction, to make it last as long as you want."

As he demonstrated, pressing the "Yes-Medium" trigger, a sudden cheer erupted from the computer, which slowly died off as he lowered the peak fader back down to zero.

With the NFL's preseason canceled this year, operators — and the audio mixers they work with — have needed to learn on the job during the first few weeks of the regular season.

"Things I never thought I'd have to say, I have to say," Stevens said. "We had an operator react to a replay. And it was just sort of in my brain that you don't react to the replays."

The absence of crowds has also revealed the presence of something else: profanity.

"The language was probably always there," Stevens said. "It's just now, with that many sensitive microphones, you can hear thoughts. I'm exaggerating only slightly, but you can really hear everything."

"We're actually on a 5-second delay now, so that we can — you know, the old term was 'bleep them out.' Now, when we hear them, we just 'replace' the audio," Gaudelli said.

Stevens explained that an off-site technician in New York handles the cleanup of obscenities by triggering a device that "scrambles" the audio from the on-field mix, while leaving the announcers' voices and crowd noise audio untouched. It enables the team to broadcast most of the field audio, which can include some fascinating tidbits fans have never heard before.

For TV viewers, the shouting on the field can sometimes be accompanied by a hollow-sounding roar in the background. To ensure fairness, the NFL's rules for 2020 require a flat drone of recorded crowd noise to be played through the stadium's PA speakers at 70 dB. The in-stadium noise doesn't react to plays on the field — the reactions are only audible to those watching the broadcast at home.

"It's just a flat line sound," Gaudelli explained. "Just to give the players a little bit of the feel of a crowd."

Asked whether there were changes or improvements he'd make to the NFL's new crowd noise system, Stevens didn't hesitate with his answer. What he really wants, he said, is to not need it anymore.

"I hope we get to a point in the country where we can put people back in the stadium, because we miss 'em," he said. "We want to be safe, but we really, really miss 'em." 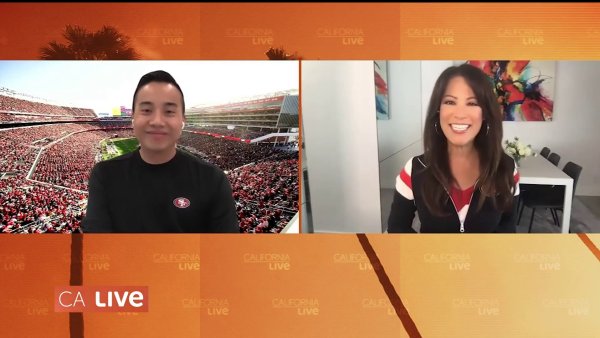 The 49ers Are Calling All Faithful Fans 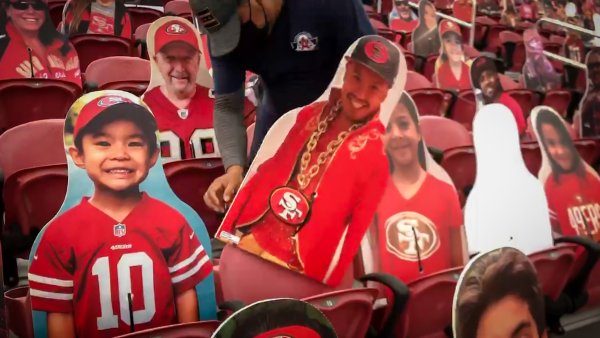 Flat and Faithful: The Story Behind the 49ers' Fan Cutouts