Durant: ‘I'm Never Gonna Get a Look' at NBA Defensive Player of the Year

Kevin Durant was phenomenal defensively over the first 33 games last season. From Opening Night through Jan. 3, Durant averaged 2.3 blocks and 0.8 steals per contest for the Warriors.

After Golden State's Dec. 27 win over the Utah Jazz, Draymond Green declared that Durant should be the front-runner for NBA Defensive Player of the Year.

"I don't think it's really a race right now (with) the way he's playing on the defensive side of the ball," Draymond told reporters. "He's been spectacular. It's a thing now, which is impressive because it always seemed like it wasn't possible to be a thing. But he's getting more and more attention for that." 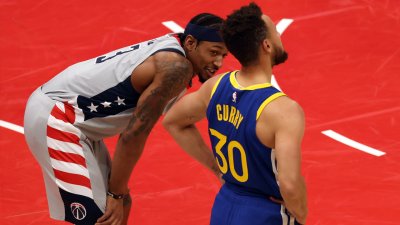 "It's cool that people are starting to recognize me for more than just a scorer," Durant said that night. "I've been trying to shake that rap since 2012. ... You want people to appreciate what you bring to the table."

The reality is that Durant's defense wasn't as strong when the calendar flipped to 2018, and the Warriors sputtered down the stretch. In the end, Durant did not win DPOY -- although he did receive two second-place votes and one third-place vote.

Was it a goal to win the award?

"You know they're not gonna give me anything," Durant said Monday on 95.7 The Game. "Even if it's on the fence, I have to be clear-cut better than everybody for me to even get a look.

"It's just pure hate for me, obviously, and no appreciation for my real skill for the game. But I get it. I understand where we coming from. I understand what we have here in this building that scares everybody.

"But for me, I was just proud of the growth that I had in that area. I just wanted to be able to be relied on to guard anybody -- whether it was helping guys at the rim, switching out onto point guards -- so I just tried to do everything. I feel like I grew so much on the defensive side of the ball last year.

"I feel like my whole game is unlocked now, when I was able to see the things I can do on that side of the basketball. ... I'm never gonna get a look when it comes to that, especially playing here for the Warriors."

Perhaps this year he gets that nod for the first time in his career ...