The United States has reached yet another grim milestone in the coronavirus pandemic – more than 30,000 people have died from COVID-19 nationwide, according to a tally from Johns Hopkins University.

Meanwhile, the number of U.S. cases continues to climb. As of Thursday night, more than 670,000 infections have been reported along with more than 30,000 deaths, according to Johns Hopkins. New York state alone is home to more than 210,000 cases and 10,000 deaths.

The Trump administration has issued new guidelines for states, individuals and employers on how to ease up on social distancing to deal with the coronavirus in areas where COVID-19 are on the decline.

The guidelines distributed to governors are published under the headline “Opening Up America Again.”

The guidelines say states or regions should meet certain criteria before moving to a phased opening. For example, there needs to be a downward trajectory of documented COVID-19 cases within a 14-day period and a robust testing program in place for at-risk health care workers.

“You're going to call your own shots," Trump told governors in a call.

For states and regions that satisfy the criteria for a “phase one” opening, the guidelines recommend that vulnerable individuals should continue to shelter in place. Others who go out should avoid socializing in groups of more than 10 people in places that don’t provide appropriate physical distancing. Trade shows are cited as an example.

For specific types of employers, it’s recommended that bars remain closed as part of phase one. However, theaters, sporting venues and churches can open “under strict physical distancing protocols.”

President Donald Trump threatened to use his "Constitutional authority" to adjourn both chambers of Congress and appoint some of his nominees without the Senate's approval.

New York Gov. Andrew Cuomo said Thursday hospitalizations, ICU and intubation rates are all down in the state but there are still roughly 2,000 people a day being diagnosed with COVID-19, so he's extending 'NY Pause' through May 15. That means social distancing measures and restrictions on businesses will remain in place for another month.

"The close down has worked," Cuomo said at a news briefing. "However, we're not there yet."

The death toll soared higher than expected this week when, in accordance with new CDC guidelines, New York City revised its reporting structure to include presumed or probable lives lost to COVID-19, NBC New York reported. Those are people who likely died of the virus but passed away before they could be tested or even seek treatment. The change added thousands more deaths to the five boroughs' toll, which stands at nearly 11,000, according to city data.

Cuomo says New York state is working to do the same, though it wasn't clear when the data would be available. Cuomo announced another 606 new deaths Thursday, bringing the state's fatality toll above 12,000.

In neighboring New Jersey, Gov. Phil Murphy announced Thursday that all schools in the state would remain closed until May 15. 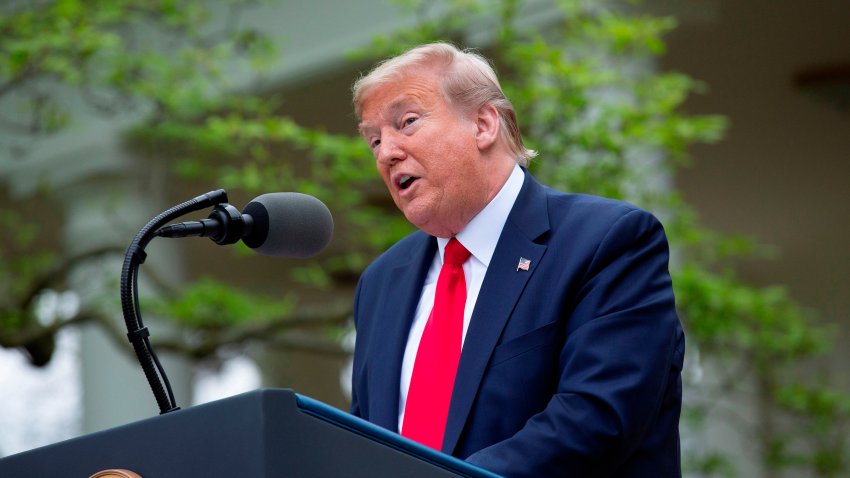 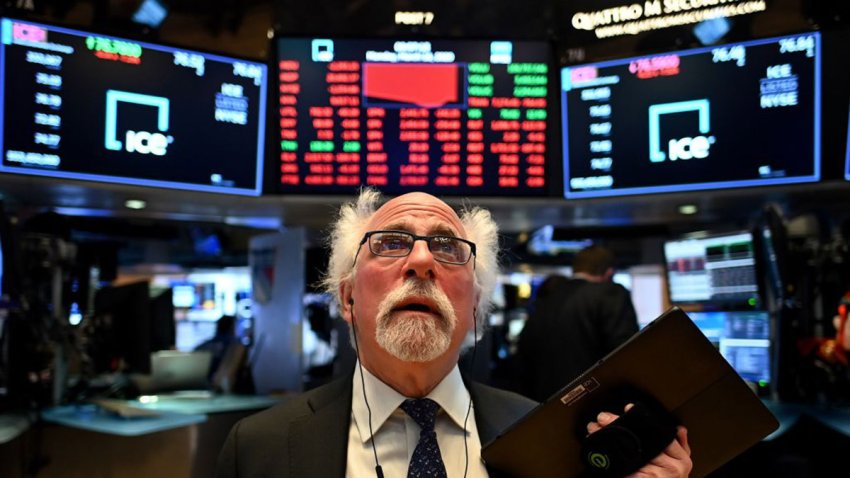 ‘In Ruins': Economic Data Even Worse Than Anticipated

The wave of layoffs that has engulfed the U.S. economy since the coronavirus struck forced 5.2 million more people to seek unemployment benefits last week.

The mounting layoffs come as the government’s paycheck protection loan program for small businesses reached its $349 billion lending limit Thursday and the Small Business Administration announced it was put on hold.

Thousands of small business owners whose loans have not yet been processed must now wait for Congress to approve a Trump administration request for another $250 billion for the program.

5.25 million people filed unemployment claims in the week ending April 11, bringing to total claims filed in the last month to about 22 million.

Defense Chief: Theories on Virus Originating in a Lab Are 'Inconclusive'

U.S. Defense Secretary Mark Esper said Thursday there is so far only “inconclusive” evidence that the new coronavirus could have originated in a lab in Wuhan, China, rather than naturally from animals being sold in a wet market.

In an interview on the TODAY show Thursday, Esper was asked about a report in the Washington Post that said U.S. intelligence officials had warned Washington in Jan. 2018 about "inadequate safety" at a Wuhan lab that was conducting research on coronaviruses from bats.

“This is something we’ve been watching closely now for some time," Esper said, refusing to comment on the intelligence aspect but calling the results "inconclusive."

Esper accused China's leaders of being "misleading" about the coronavirus outbreak and said he doesn't believe the Chinese Communist Party is being truthful even now.

“They’ve been misleading us. They’ve been opaque, if you will, from the early days of this virus, so I don’t have much faith that they’re even being truthful with us now,” he said.

Esper also indicated the possibility of reinstating Navy Capt. Brett Crozier, who was relieved of his command of the USS Theodore Roosevelt after raising concerns about a coronavirus outbreak.

Esper said that an investigation into the incident was completed last week and the Navy is now reviewing its findings, adding that while he couldn't comment further, he was keeping an "open mind."

"Let the investigation within Navy conclude itself, and we’ll take things as we can and make very reasoned opinions and judgments as this progresses," Esper said.

A phone call led New Jersey police to a gruesome scene at a nursing home in New Jersey that has been ravaged by the coronavirus.

Police say they found 17 bodies piled inside a small morgue at the Andover Subacute and Rehabilitation Center in Sussex County. An anonymous tip said the bodies had been moved there after being stored in a shed, the New York Times first reported.

Rep. Josh Gottheimer later confirmed to NBC New York that prior to the disturbing discovery he had received a call from one of the nursing home's administrators, also infected with COVID-19, saying that more body bags were needed. The congressman said 68 people have died inside the senior facility, 26 of whom had tested positive for the virus and two of whom were staff members.

Local officials say the nursing home claimed the infected residents were being housed on separate floors or wings to stop the spread, but the facility has not returned NBC New York's request for comment.

Virginia Harris says she thought she was going to die, but beat the odds and survived coronavirus.

Allen is the first active NFL player to acknowledge testing positive during the coronavirus pandemic.

The third-year pro is not hospitalized and is “feeling good,” according to a statement issued by the Rams on Wednesday night only after Allen spoke to Fox Sports about his positive test.

The 24-year-old was training and rehabilitating at the Rams' training complex when he began to feel symptoms last month. He told Fox Sports that he lost his sense of smell and taste, and they haven't returned even after his other symptoms abated.

The NFL and NFL Players Association have agreed to hold a voluntary, virtual off-season program amid the coronavirus pandemic.

Students Could Take SAT at Home If Schools Remain Closed

A home version of the SAT college entrance exam is being prepared in case schools remain closed into the fall, College Board officials said Wednesday as they announced the cancellation of June testing.

Instead of a paper-and-pencil test given under proctors’ supervision, the home version would be digital and rely on “remote proctoring.” That could include using the computer’s camera and microphone to monitor movement or talking, College Board President Jeremy Singer said on a conference call with reporters.

The rival ACT also will launch an at-home option in late fall or early winter, the exam’s administrators said Wednesday.

“We would much prefer that schools reopen, but we are ready to innovate and deliver in the unlikely case we need to,” College Board Chief Executive David Coleman said.