Three rings in five seasons affirm the excellence of Stephen Curry, Klay Thompson and Draymond Green, as well as the immeasurable ambition of CEO Joe Lacob. The Warriors do not rise from the ashes without them. All of them. 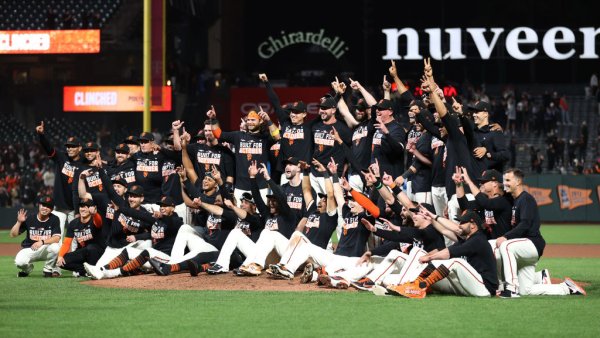 Three rings indicate president/general manager Bob Myers and his front office squad can make the right moves to supplement a marvelous foundation. Their summer of 2016, adding Kevin Durant and a solid supporting cast with minimum contracts, was magnificent.

Because the fourth ring must be built on their own. There is no proven talent sage like Jerry West, who steered them toward Thompson. No Travis Schlenk, advocating for Green as a second-round pick. No squad of selfless All-Stars boarding a private jet and flying across the country to close the deal with Durant and create a team for the ages.

For Myers and Co. to prove capable of building a team, this is the week it begins. Step One comes Wednesday night, when they enter 2020 NBA Draft with the No. 2 overall selection. It’s precious leverage, whether they keep it or trade it.

“We always have to get it right,” Myers conceded to NBC Sports Bay Area. “Our fanbase has a certain level of expectation, which they should. I do, for myself. Our owner does for our organization. Kerr does. We all do. To be fair, I try to get it right all the time.

It’s not as if the Warriors are starting over. The Curry-Green-Thompson core should have several more prime years. But those in the front office understand that having the No. 2 overall pick is the greatest asset they’ve owned as a group and that it comes at a time when the roster must make at least a quarter-turn toward the future.

Make the right choices, they add a future All-Star and polish their credentials.

The front office has worked under the handicap that comes with elite status, which shoves the franchise to the bottom of the draft. Picking late is an art few are able to master, but there are gems. Draymond went 35th overall in 2012. Nikola Jokic was a second-round pick in 2014, as was Jordan Clarkson. Other second-rounders blasting their way into the starting lineup or rotation include Montrezl Harrell and Josh Richardson (2015), Malcolm Brogdon and Ivaca Zubac (2016), Semi Ojeleye and Dillon Brooks (2017) and, more recently, Devonte’ Graham and Mitchell Robinson in 2018.

Eric Paschall, Golden State’s second-round pick in 2019, shows signs of following that path. Maybe he represents a breakthrough of sorts. But the Warriors would have to combine insight, instruction and incredible luck to find rotation players with their second-round picks, No. 48 and No. 51. They’ve never had more time, though, to scan rosters and study video.

“As a staff, we've been working on it for eight months,” said assistant GM Larry Harris, whose 11 years in the front office make him the senior member.  “We've never had this much time, even when we were not in the playoffs or in The Finals. We've never had enough time to be able to really evaluate these players. We've seen more film, we have much more intel and, certainly, we as a staff, we’ve been able to have Bob and (VP of basketball operations Kirk Lacob) and sometimes even Joe and Steve, in it as well as the rest of our front office.”

The stakes are high, perhaps higher than they’d like, because none of the four draft picks brought in by the front office in 2016, 2017 and 2018 is with the franchise. Evans (Minnesota Timberwolves) and Bell (Cleveland Cavaliers) are deep on the benches of sub-mediocre teams. Damian Jones is a part-time starter with the lowly Atlanta Hawks and Patrick McCaw played 48 minutes in Toronto’s 11 playoff games in the NBA bubble.

Had the front office nailed any two of those picks, it would have youngsters contributing to a franchise still capable of contending.

Instead, the Warriors are staring into a crucial draft and scouring the free-agent market. They know this offseason likely is their best chance to retain at least a semblance of what they’ve built while also addressing the roster in, say, 2024-25. The transition from being a contender to remaining one begins this week.

“I feel like you always owe the fans,” Myers said. “They’ve been so good. And I’ve got to watch the games, too. I don't want to screw it up. I want to watch a good product.

“So, we really do feel pressure. But it's healthy pressure. It's not like pressure you're afraid of, or you can't move, or you’re paralyzed. You really want to feel that pressure.”

The Warriors completed the massive task of shedding the reputation as a dead-end franchise. They’re now a global brand, synonymous with spectacular performance.

Longing to endure, they want no part of being a front office with a checkered draft history. It’s “money time,” and we’re about to discover whether Myers and Co. can deliver in the clutch