Firefighters battling wildfires in California and beyond are finding a growing number of four-legged friends hanging around base camps, offering them a much-needed distraction from the extremes they face on a daily basis

Firefighter Kevin Brown had been on the front lines for 11 straight days, facing flames from a wildfire scorching Southern California.

His body was exhausted. His spirit was waning. Rejuvenation was desired, but it would have to wait. Brown and his fellow firefighters were called to battle another wildfire that had broken out in the Bay Area.

The team packed up their gear, hopped in the fire engine and made the hours-long drive north to the SCU Complex Fire burning in the hills outside San Jose.

As the engine pulled into a parking lot at the fire's base camp, Brown received a much-needed boost from a new furry friend on four legs: Micah, a golden retriever serving as a therapy dog.

"The moment we pull into the SCU base camp, Micah was waiting for us," Brown said. "It was the perfect thing that we needed to get us that disconnect from all of that hard work and revamp us before we were about to start a whole 'nother level of work on a brand new fire."

Micah is one of a growing number of therapy dogs strolling around wildfire base camps in California these days, providing firefighters with a vital distraction from the taxing work they face for days on end out on the front lines.

"I can tell you from firsthand experience, when we drive off that fire line at about 7 in the morning after being up for, at that point, about 30 hours straight, as tired as we are, seeing the dogs at the entryway of base camp is one of the best, enthusiastic, positive shots in the arm we could have," Brown said.

During early morning briefings at base camps for some of the largest fires, the dogs and their handlers will cruise the cafeteria lines or circle the parking lot where the firetrucks are sitting, offering inviting eyes and infectious smiles.

"They kind of take in whatever the firefighter wants to put out," Brown said. "Some firefighters just come by and give them a quick pet. Other firefighters will sit down with them, spend five minutes with them, let the dogs kind of nuzzle up to them. Whatever that firefighter needs to do to decompress, the dog's ready there for it."

Heidi Carman, a handler herself and founder and executive director of First Responder Therapy Dogs, a nonprofit that lends emotional support to first responders with the help of therapy dogs, said she and her golden retriever Kerith see a wide range of reactions when they visit with firefighters.

"I get a lot of laughter," Carman said. "A lot of people are laughing when they're petting her. They're laughing with each other and smiling."

"This one Cal Fire firefighter, she saw Kerith, and she was probably so exhausted, she just broke down and cried," Carman said. "It was happy tears, but she was just crying and burying herself in Kerith."

Tears of sorrow are shed as well.

During a recent visit to a wildfire base camp near Lake Tahoe, a firefighter approached Carman and Kerith and shared some heart-wrenching news.

"He looked at me and he just said quietly, ‘I had to put my dog down two weeks ago.’ Then he immediately went down on his knees, buried his head into Kerith and just started crying," Carman said. "He cried for a bit and then he looked up at me, wiped his eyes and as he was still down at Kerith's level, he just said, 'Thank you,' and then walked off."

However firefighters react in their interactions with the dogs, it's helping, according to Elisabeth Van Every, senior communications specialist and managing editor at Pet Partners, another organization dedicated to improving peoples' well-being with the assistance of therapy animals.

"There is research that shows that petting an animal can reduce stress hormones and can increase an overall feeling of wellness," Van Every said. "It's very common for people who have the opportunity to visit with a therapy animal to feel less stressed, to have their minds clear up."

Even when few, if any, words are shared between the firefighters and handlers, the dogs are still making a difference.

"Sometimes [the firefighters] like to talk to the animal if they have the opportunity because the animal's never going to judge them for what they feel," Van Every said. "That can provide an additional level of stress relief for them."

As firefighter Ricardo Tlapala explained, firefighters are constantly laser focused on helping others that they tend to forget to take care of themselves. And when it's time to talk about how they're feeling, brushing off the emotions with silence can be a routine response.

"We're trying to destigmatize that," Tlapala, who also serves on a peer support team at his home department, said. "We're trying to change the culture where you just kind of bottle everything up and keep it inside and you don't really talk about it. We really engage, especially with our newest recruits, 'Hey, it's OK. These things are going to affect you. They take a toll on you.'"

Spending just a few minutes with a therapy dog can help push firefighters to take that next step in reaching out for help, Van Every said.

Carman and Van Every aspire to send even more therapy dogs and handlers to wildfire base camps in the future.

"The need for this is increasing rapidly," Van Every said.

"It's unconditional love that they're giving you," he said. "They just take you away from that engaged state for a moment, let you be free, kind of reset. Then, you can re-engage. It's good for the soul." 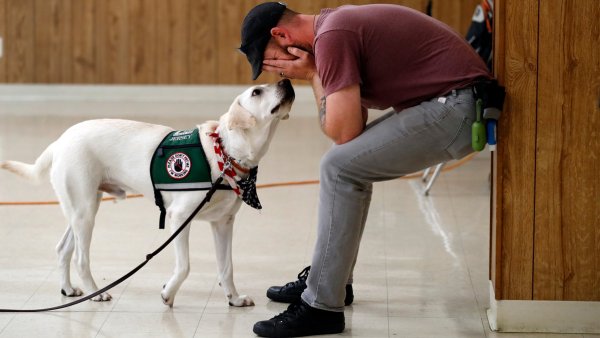 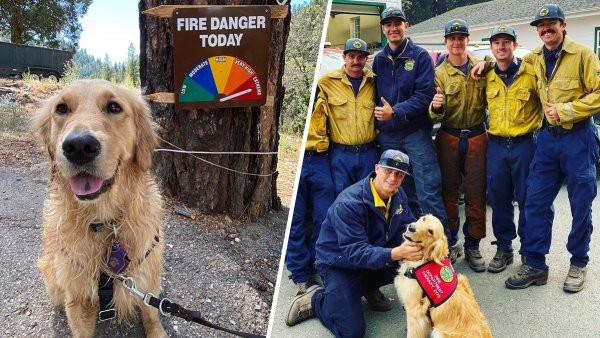 Kerith the Golden Retriever Is Offering Comfort to California Firefighters