With many U.S. states lifting their coronavirus restrictions according to their own timetables and needs, Americans are facing a bewildering multitude of decisions about their health and their livelihoods.

Scientists, meanwhile, announced Wednesday that an experimental drug has proved effective against the virus that has killed over 60,000 people in the U.S, reducing the time it takes for patients to recover.

The development comes as nationwide cases surpassed 1.04 million. The true toll is believed to be much higher because of limited testing, differences in counting the dead and concealment by some governments.

U.S. intelligence agencies are debunking a conspiracy theory, saying they have concluded that the new coronavirus was “not manmade or genetically modified." But they say they are still examining a notion put forward by the president and aides that the pandemic may have resulted from an accident at a Chinese lab.

The statement from the Office of the Director of National Intelligence, the clearinghouse for the web of U.S. spy agencies, comes as President Donald Trump and his allies have touted the as-yet-unproven theory that an infectious disease lab in Wuhan, the epicenter of the Chinese outbreak, was the source of the global pandemic, which has killed more than 220,000 people worldwide.

In recent days the Trump administration has sharpened its rhetoric on China, accusing the geopolitical foe and vital trading partner of failing to act swiftly enough to sound the alarm about the outbreak or to stop the spread of the virus that causes COVID-19. U.S. officials have said the Chinese government should “pay a price" for its handling of the pandemic.

The new statement says, “The Intelligence Community also concurs with the wide scientific consensus that the COVID-19 virus was not manmade or genetically modified."

"The IC will continue to rigorously examine emerging information and intelligence to determine whether the outbreak began through contact with infected animals or if it was the result of an accident at a laboratory in Wuhan.”

Trump suggested Thursday he has seen evidence that the coronavirus was created in a Wuhan lab.

"Yes I have," Trump said when asked by a reporter if he had seen anything that gave him a high degree of confidence that the Wuhan Institute of Virology was the origin of the virus.

"We have people looking at it very, very strongly," Trump said. "Scientific people, intelligence people, and others."

A Navy hospital ship is leaving New York City a month after it was sent to relieve stress on hospitals at the height of the coronavirus pandemic.

The USNS Comfort set sail at noon Thursday en route to Norfolk, Virginia. After arriving to great fanfare, the Comfort treated just 182 people as a surge in cases in the hard-hit city fell short of the worst-case projections. The last dozen patients on the ship were discharged or transferred to other hospitals over the weekend.

Meanwhile, Gov. Andrew Cuomo says New York City is shutting down its subway system each day from 1 a.m. to 5 a.m. to increase cleaning of trains and stations during the coronavirus crisis.

Citing reports of an increased number of homeless people seeking refuge in train cars and the deteriorating conditions in the subways, Cuomo said keeping the system safe is vital because it continues to be a place of high density.

Subway trains, which had been disinfected at least once every 72 hours, will now be cleaned once every 24 hours. Cuomo said Thursday that buses, vans and other alternative transportation will be provided at no charge to essential workers while the subway is closed.

Crowds gathered on the Capitol lawn while drivers leaned on horns as they traveled past. This was a repeat of what occurred April 15 but with fewer numbers.

The signs said, “Shut down the lockdown” and “No work no freedom.” Some wore the “Don’t Tread On Me” flag as a cape.

Whitmer, a Democrat, wants Republican lawmakers to stretch her emergency declaration by 28 days to ensure that health care workers continue to have special legal protections.

The Federal Reserve announced Thursday that it was expanding a major lending program to provide support for businesses struggling to cope with the economic slowdown caused by the coronavirus pandemic.

The Fed said that it was expanding the scope and eligibility of its Main Street Lending Program which is designed to provide up to $600 billion in loans to small and mid-size businesses that have been harmed by the pandemic and the efforts to contain it.

Macy's Plans to Reopen All Stores in 6 Weeks

Macy's expects to have all of its roughly 775 stores reopened in six weeks, should Covid-19 infection rates taper off, and local governments allow retailers to proceed, a spokeswoman confirmed to CNBC.

The retailer is planning to reopen 68 department stores Monday in states like South Carolina and Georgia, where local governments have loosened lockdown restrictions meant to curb the rate of coronavirus infections. Those stores will operate on reduced hours, from 11 a.m. to 7 p.m.

About 25% of these locations are in Simon Property Group’s malls, which announced Wednesday it would begin reopening 49 of its malls and outlet centers as soon as Friday.

A second wave of roughly 50 Macy's stores is scheduled to reopen May 11.

Macy’s told CNBC it will take a number of precautions to try to make its workers and customers feel safe, including enforcing social distancing, taking workers' temperatures before coming in and mandating face masks in stores.

Simon, the country's largest mall operator, is planning to reopen some malls in states where coronavirus stay-at-home orders are being lifted. So what might visiting a mall look like when local centers reopen? NBC10's Lauren Mayk explains.

Roughly 30.3 million people have now filed for jobless aid in the six weeks since the coronavirus outbreak began forcing millions of employers to close their doors and slash their workforces.

More than 3.8 million laid-off workers applied for unemployment benefits last week as the U.S. economy slid further into a crisis that is becoming the most devastating since the 1930s.

With more employers cutting payrolls to save money, economists have forecast that the unemployment rate for April could go as high as 20%. That would be the highest rate since it reached 25% during the Great Depression.

Fauci: Remdesivir Is Good 'First Step' in Fighting COVID-19 But 'Not the Total Answer'

The nation's top infectious disease expert said the modest results for an experimental drug that showed promising signs in treating patients with the coronavirus is a good "first step" in fighting the outbreak, but cautioned that it's "not the total answer."

"It's important, but it's the first step in what we project will be better and better drugs coming along, either alone or in combination with drugs of this type, and drugs addressing other targets of the virus," the National Institutes of Health’s Dr. Anthony Fauci said in an interview on TODAY.

In a study of 1,063 patients sick enough to be hospitalized, Gilead Sciences’s Remdesivir shortened the time to recovery by 31% — 11 days on average versus 15 days for those just given usual care, officials said. The drug also might be reducing deaths, although that’s not certain from the partial results revealed so far.

Fauci said he expects the Food and Drug Administration's approval for emergency use of Remdesivir to happen “really quickly.”

Fauci also confirmed that he has been working on the Trump administration's "Operation Warp Speed" project to fast-track a vaccine.

Fauci said that the U.S. is in the early phases of a trial for a vaccine and once researchers move into the next phase, they’re going to go "as quickly as we possibly can" to determine its safety. If they think that might be the case before that testing phase is completed, Fauci said the U.S. will start preemptively ramping up production of the vaccine in the hopes that it will work. The goal is to get hundreds of millions of doses to the public by January.

Asked whether the states that are beginning to reopen have the capability to identify, isolate and contact trace individuals should their cases spike, Fauci said that while he can't go through a list state by state he urges those who don't to "go very slowly" because "you will get blips."

"When you pull back, there will be cases," Fauci said.

An NPR survey of all 50 states, Puerto Rico and the District of Columbia, found most states don't have enough workers to do the crucial job contact tracing. Of the 15 states that have begun to reopen, only Michigan will meet estimated workforce needs.

Gov. Gavin Newsom will order all beaches and state parks closed Friday after tens of thousands of people flocked to the seashore last weekend during a heat wave despite his stay-at-home order, according to a memo sent Wednesday evening to police chiefs around the state.

Eric Nuñez, president of the California Police Chiefs Association, said it was sent to give chiefs time to plan ahead of Newsom’s expected announcement Thursday.

Newsom this week targeted beachgoers in Orange and Ventura counties, calling them an example of “what not to do” if the state wants to continue its progress fighting the coronavirus. While many beaches and trails throughout the state have been closed for weeks, others have remained open with warnings for visitors to practice social distancing and more have reopened.

In Newport Beach, some 80,000 visitors hit the beach over the weekend, although lifeguards said most people exercised social distancing. With criticism swirling, the Newport Beach City Council met Tuesday and rejected a proposal to close the beaches for the next three weekends.

Over 70% of Tested Inmates in Federal Prisons Have COVID-19

The response from the federal Bureau of Prisons to the growing coronavirus crisis in prisons has raised alarm among advocates and lawmakers about whether the agency is doing enough to ensure the safety of the nearly 150,000 inmates serving time in federal facilities.

And even though officials have stressed infection and death rates inside prisons are lower compared with outside, new figures provided by the Bureau of Prisons show that out of 2,700 tests systemwide, nearly 2,000 have come back positive, strongly suggesting there are far more COVID-19 cases left uncovered.

Prisons officials say they are doing the best they can under dire circumstances and following guidelines set by the Centers for Disease Control and Prevention.

As of Wednesday, 30 inmates had died of the coronavirus at federal correctional facilities since late March. About 600 have recovered. 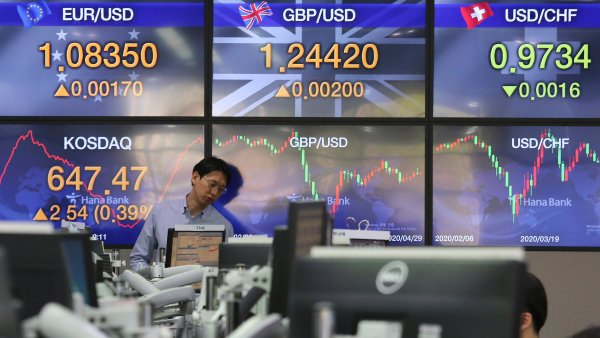 Asian Shares Rise on Hopes for Drug to Treat Coronavirus 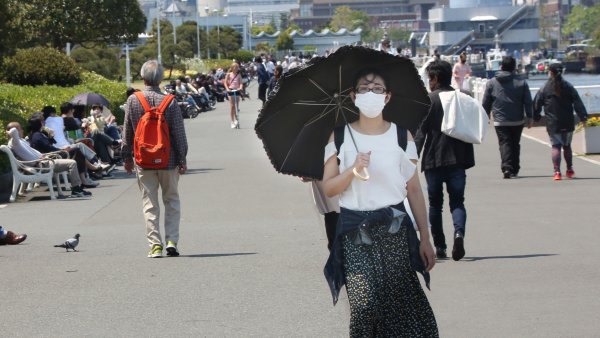