A San Francisco police officer was attacked last week by a man who had allegedly been shouting racist comments at other people.

The first signs of trouble came from witnesses who say they spotted a man Friday afternoon screaming racial slurs about Asians.

"He kind of came out of the parklet and was throwing cardboard around and was shouting," David Yee said. "Stuff like, 'Chinese people don’t belong here.'" 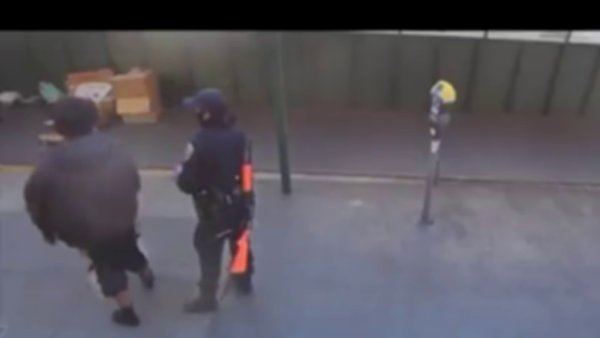 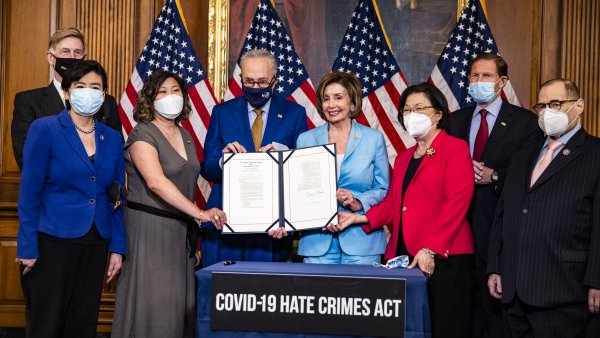 Minutes later, a surveillance camera caught what Yee says is the same man, identified as 33-year-old Gerardo Contreras, as he attacks a police officer, who is Asian, as she tries to detain him.

The officer approaches Contreras and orders him to turn around and put his hands behind his back. He first appears to comply, but then he turns around and mauls her, crashing down on her with all his weight.

The camera captures several bystanders move in to help, pulling Contreras off the officer.

Yee said seeing the video brings back memories of his own attack just months ago.

"As I was coming out of the store, a homeless guy spit at me," he said. "I turned around and looked at him, and he kind of says, 'Oh, no, I wasn’t spitting at you. I was just spitting on the ground.' And I go, 'OK.' So I started to walk away and then he says, '[expletive] Chinese.'"

A San Francisco police officer was attacked last week by a man who had allegedly been shouting racist comments at other people. Jean Elle reports.

Ken Fong, a Chinatown community organizer, said he sees or hears about attacks in some form at least two to three times a day – attacks he too has faced since the pandemic began.

"There was a homeless man, he was solicitating at China Live," Fong said. "I was just picking up an order and he was asking me for food. I said, 'Sorry, I can't give it to you because this is a pickup for a family member.' He just went, 'Oh, yeah, you’re the cause of the pandemic.'"

The president of the Police Officers Association said the officer should not have had to approach Contreras by herself. Even with five years on the force, he said the cop should have had a partner.

"The officer was alone and it's directly related to staffing," San Francisco Police Officers Association President Tony Montoya said. "We've had a recruitment and retention crisis for years now."

Montoya said he is grateful people in the area jumped in to help the officer until backup arrived. He also said the orange weapon seen in video indicates the officer had armed herself with a less than lethal weapon to get Contreras into custody.

The attack on the officer is under investigation. Police are not yet ready to say whether it will be charged as a hate crime.

In the meantime, Fong and many others say more law enforcement is needed in Chinatown. Until that happens, he says some business owners are closing early because they fear they could be the next target.